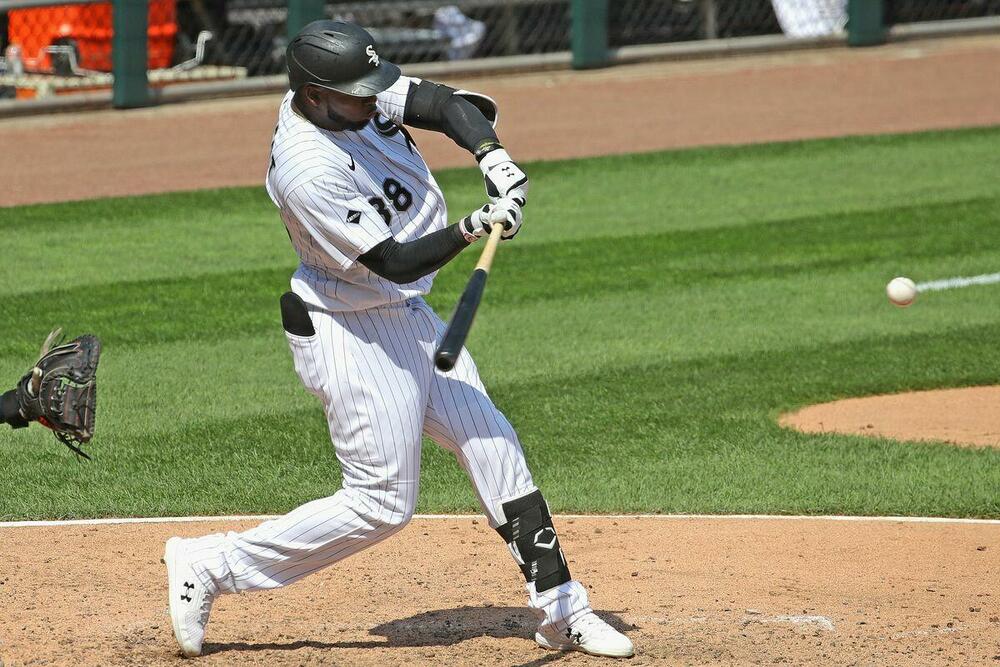 Tim Anderson is ailing and so Robert made an appearance as the White Sox leadoff hitter on Tuesday. It led to him snapping a six-game hitting streak with an 0-for-4 night and one strikeout. Anderson should be back and Robert should slide back to second in the lineup, where he has been brilliant. The young slugger still swings and misses a lot, but he has cut down on his strikeouts and improved his overall contact. That coincides with a marked improvement against fastballs. Robert was one of the rare young hitters that actually hit breaking balls better than fastballs as a rookie, but this year while continuing his damage against breaking pitches, he has made massive strides against heaters to the tune of a .400 batting average and .600 slugging percentage. The confidence to hit all pitches has led to a six-point drop in CSW-rate and a noticeable improvement on pitches inside the strike zone. To make such dramatic gains in such a short time is impressive, and while it's still too small a sample size to know whether this will continue, it's clear Robert is developing in real time. He will be a huge asset over the final month and into next fantasy season. He just wasn't on Tuesday.

McCullers found himself in a pitchers duel, but walks and a high pitch count forced him out of the game after only five scoreless innings. He struck out three batters but allowed four hits and three walks. Unfortunately, Yusei Kikuchi was even better so McCullers had to settle for a no-decision. Walks have been a problem all season, all career really, for the talented righty. It was his second straight start allowing at least three walks and either that results in runs scored or short outings like Tuesday. McCullers is actually pitching inside the strike zone more than he has the last couple seasons, but he is getting fewer swings on pitches outside the strike zone. McCullers has developed a devastating slider that has been incredibly effective, but ultimately his top three pitches are all pitches with great movement (sinker, slider, curveball). He doesn't really have a "straight pitch," which seems good and challenging for opposing hitters on the surface, but it also means batters know they can't do much damage on the pitches out of the zone and so there's no real hope in trying. Now sure, that's a simplified explanation for an extraordinarily complex pitcher, but it is something he will have to address in the offseason. He simply cannot have a double-digit walk rate. If he can improve that facet of his game, he can evolve into an elite fantasy ace.

Schwarber hit his 28th home run of the season, a 419-footer to straightaway center. It was one of two balls Schwarber hit over 107 miles per hour (the other was a line drive single in the 9th inning). The 6th-inning home run off Ryan Yarbrough was his third off a left-handed pitcher this year. While he has improved his production against lefties, his power is drastically better against righties. Nonetheless, in spite of a midseason trade, overcoming COVID-19 and other injuries, Schwarber is headed towards the best season of his career. It comes with a career-high barrel rate and a more reasonable BABIP (somehow his career BABIP is only .272). Furthermore, his sweet spot rate is a career-best 40%, which contributes to a line drive rate over 20% for the first time in his career. Popups are down, weak fly balls are down and hard line drives are up. So his BABIP is up, which is why his batting average is a solid .267. These are real, repeatable gains and should be factored into draft prep next season.

Skubal tied a season high with six runs allowed against Oakland on Tuesday. The six runs were split evenly into two innings: the 3rd and 5th, each of which he allowed a 2-run home run. He is fourth in the major leagues with 30 home runs allowed and gives up the highest barrel rate of any qualified pitcher in baseball. His pitch mix is deep and intriguing, but his fastball is too volatile for consistent results right now and batters are teeing off on his most-commonly used pitch. Skubal was a strikeout machine in the minor leagues, and while his strikeout numbers are good for a rookie, they're not overwhelming. Surprise! Major league hitters are better than minor leaguers. As opposing hitters make better contact than they did in his minor league career, quality of contact becomes more impactful. In other words, Skubal can't simply rely on blowing his fastball by major league hitters. He needs to use his other pitches to weaken contact and produce more batted ball outs. I think he can definitely do that, but it could cause some growing pains over the early part of his career.

How bad are the Cubs? They didn't walk against JOHN GANT!!! How bad is John Gant? It's his first start of the season without allowing a walk. He completed five innings, allowing two runs on three hits with five strikeouts. He was still inefficient as he threw 89 pitches in the five innings. Gant overcame horrendous control to post solid surface stats over the first couple months of the season, but then the walks and poor command led to trouble which led to his ouster from St. Louis in the J.A. Happ trade. He made seven appearances out of the Minnesota bullpen before assuming a starting role two weeks ago. But then came the walks, and the high pitch counts and the ascendant ERA. Gant will never be a trustworthy starter until he diminishes the walks. Meanwhile, Gant's ability to limit hard contact has regressed over the years. He is allowing an average exit velocity of nearly 91 miles per hour and an expected slugging percentage of .400. Hard contact combined with poor control is not a recipe for success. Gant should be ignored during draft season. Until he shows better control and weaker contact, he cannot be relied upon.