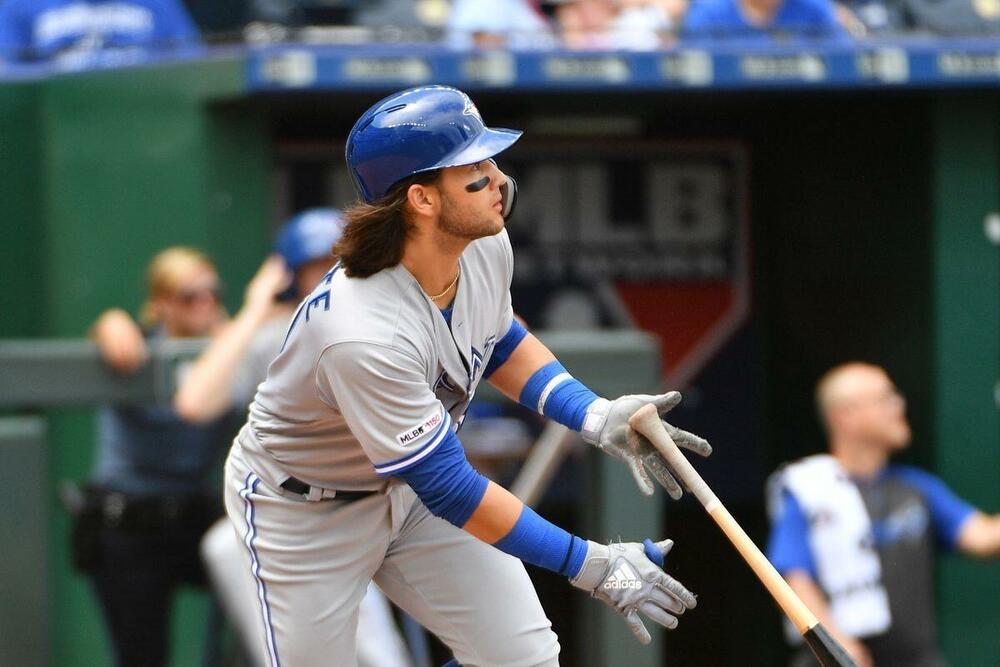 Bichette willed the Blue Jays to a vital win on Wednesday, hitting two home runs and finishing with three hits in four plate appearances. He has 28 dingers and 24 stolen bases to go along with a .295 batting average and over 100 runs and RBIs. He is perhaps the most reliable 5-category contributor next season (Trea Turner certainly gets an argument there as well). Bichette's reliability is two-fold: at 23 years old, he has improved his plate discipline every year. Yes, he swings a lot, and his 11.5% swinging-strike rate is relatively high, and yes, he doesn't walk, but he makes contact on 80% of his swings, of which there are many. That means a lot of balls in play, which is a good thing for a player with a 48% hard-hit rate. For instance, his BABIP is .335. That's high, but it fits his profile. A high BABIP with a lot of balls in play leads to a lot of base hits. As he reaches base, he will continue to steal bases and in that Blue Jays lineup he will be responsible for a ton of runs. Bichette won't be the first Blue Jay taken, but he could end up as 2022's most valuable player.

Eovaldi shut down the Orioles for six innings, allowing four hits and a walk while striking out seven en route to his 11th win. It was an important rebound following last week's debacle against the Yankees where he allowed seven runs in less than three innings. Eovaldi will finish the season with his lowest fastball velocity since 2014. While only a minor dip, it has coincided with the lowest average exit velocity. Fewer barrels, more weak popups and a significant drop in home runs have solidified the traditionally inconsistent fireballer. Furthermore, after several seasons of frustration among fantasy owners regarding Eovaldi's low strikeout totals, his seven punchouts on Wednesday give him 195 for the season. That is 53 more than his previous career high as Eovaldi has gradually improved those numbers throughout his career, as evidenced by his career-best 29.7% CSW rate. Often overlooked on draft day, a healthy season with an uptick in K's will help Eovaldi climb the draft board next season.

Pineda finished the season strong, allowing one run on eight hits in 5.2 innings. He recorded five strikeouts, the first start with more than five K's since July 26. The delta between Pineda's xFIP and ERA is 0.66, notable as he benefited from a relatively high 77.7% strand rate. Furthermore, he was hit particularly hard this year, giving up a career-high 9% barrel rate and 91-mph average exit velocity. Likewise, his strikeout rate is the lowest of his career. Nonetheless, Pineda offers a solid floor due to his excellent control. Walking less than five percent of batters he faces, he keeps the bases clear, which limits the damage on the hard hits he gives up. Pineda's career has been one wild ride, from top prospect traded to the Yankees, injuries and suspensions abound, he is now a veteran pitcher who is anything but flashy yet capable of providing a modicum of stability for fantasy owners.

Urshela extended his hitting streak to nine games with an RBI-single to get the Yankees on the board in the 5th inning. It was his only hit in the contest, as the versatile infielder is close to wrapping up a somewhat disappointing third season in New York. After back-to-back campaigns with 132 and 133 wRC+ respectively, Urshela is below average at 97 in 2021. Regression in plate discipline has contributed to a lower batting average. Furthermore, his quality of contact has deteriorated, with an average exit velocity below 89 miles per hour. Additionally his groundball rate is in line with his pre-Yankees years (a combined eight home runs over three seasons). His role in the Yankees infield is less defined than it was prior to the season. If New York brings in a big-name shortstop as some anticipate, he faces an uphill battle to regular playing time. The excitement over his breakout season in 2019 was likely overblown, and Urshela is a better fit as a utility infielder with 350-400 at bats. That should be taken into consideration during draft season.

Berrios delivered his seventh straight quality start on Wednesday, holding the Yankees to three runs on four hits in six innings. He struck out seven batters and didn't walk anyone. He also didn't allow a home run for the first time in his last six starts. Depending on the outcome of Toronto's upcoming games, Berrios could get one more start to close out what has been his most productive season. Berrios made a subtle adjustment to his pitch mix this season, using his sinker more, and that has led to a slight increase in his groundball rate. Batters are getting a little less lift against the right-hander and therefore less power. Furthermore, Berrios will likely finish with the lowest walk rate of his career and the highest strikeout rate. The moderate advancements have Berrios continuing an upward trajectory into an arbitration season.