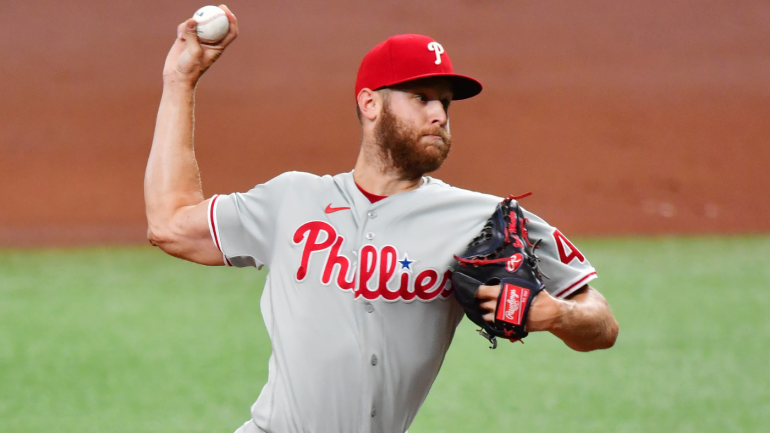 After four subpar appearances, Wheeler shut down the Brewers for six innings on Monday, allowing five hits and no walks while striking out nine batters en route to his 12th win. It was encouraging to see Wheeler post zero walks after walking four batters in his previous start. The real key for Wheeler though has been improved strikeout numbers and a new approach against lefties. Wheeler has always been elite at limiting hard contact so he didn't need to strike out a lot of batters because he could pitch to contact and get outs on batted balls. However, his pitch mix is conducive to strikeouts (high velocity, good movement, powerful breaking pitches). He has taken advantage this season and is striking out a significant number of hitters while still limiting hard contact. His commitment to generating more whiffs is evident in his increased usage of his slider, which has a 30.5% whiff rate. Furthermore, he's using that pitch more against lefties. Like a lot more. Seventy-one percent of his sliders are against left-handed batters as opposed to 30% just two seasons ago. Lefties have hit Wheeler harder than righties, but using his strikeout-rich slider against lefties has simply led to a lot more strikeouts, avoiding some of the pitfalls of those batters doing damage on batted balls. That evened out his splits in terms of overall production allowed to righties and lefties. In other words, he has an answer for all batters. Either force swing-and-miss or lean on his ability to generate weak contact. The full package of Wheeler on display in a Cy Young-caliber season has elevated the 31-year-old righty to elite fantasy status heading into 2022.

Hayes led off for the Pirates for the second straight game and delivered his first three-hit game of the season. Three singles, including two runs and two RBIs carried Pittsburgh to a 6-3 win over Detroit. After posting a .464 wOBA in 95 MLB plate appearances last season, Hayes has disappointed with a .306 wOBA in 2021. He was never going to sustain the .450 BABIP from 2020, but even his power is way down (.306 ISO in 2020; .124 ISO in 2021). He is hitting the ball on the ground far more than any time in his professional career. His launch angle is 2.2 degrees, which doesn't take advantage of his above-average bat speed. Therefore, his barrel rate is a dismal 5.6 percent. It's fair to wonder whether hand and wrist injuries have hampered his swing. Did an early-season wrist injury affect his ability to get under the ball? Hopefully Hayes can get fully healthy this offseason and deliver a bounceback season in 2022.

Garcia had his fourth two-hit game in the last seven with a single and triple on Monday. Garcia continues to play regularly for the rebuilding Nationals following a late-July promotion. For the first time in his professional career, the former highly-rated prospect showed some pop, hitting 13 home runs in 159 plate appearances at AAA before his permanent callup on July 29. He continued the power display with a home run in his second start following the promotion and then a two-homer outburst against Philadelphia on Aug. 4. Then the power disappeared and Garcia doesn't have a home run since, although he does have six extra-base hits in the last seven games. He just hasn't translated any of his AAA power to the majors. His average exit velocity is only 86.1 miles per hour and his barrel rate is a lowly 4.2 percent. Not much to get excited about as his expected slugging percentage is only .324. From a fantasy perspective, he has very little speed and until the power manifests into major league home runs, there is no reason to commit a roster spot to the light-hitting middle infielder.

The ball was flying out of Coors Field on Monday, and the diminutive Estrada took advantage, hitting two home runs and driving in three. Getting a solid source of playing time after a splendid run at AAA, Estrada has delivered a 114 wRC+ and a decent slash of .273/.328/.464. The truth is, regardless of Estrada's production, it's fantastic to see him playing baseball after suffering a gunshot wound to the hip three and a half years ago. There is a role for Estrada in major league baseball, and likewise in fantasy baseball. He needs a little more aggressiveness in his swing, but he makes very good contact, gets on base and has quiet speed. He can play multiple positions across the defense and is a player to keep an eye on as a late-round sleeper next season. Playing time will be of obvious significance, but Estrada is capable of being an offensive presence.

Rodgers hit a pair of doubles and scored a run in four plate appearances, raising his OPS over .800 and his ISO to .184. The former #3 overall pick has played well this season, if not spectacular. He has managed to cut down on his strikeouts and improve his contact. What will really benefit Rodgers is a greater commitment to launch angle. He has a 52% groundball rate, a different batted-ball profile than his output in the minor leagues. He has the bat speed and power to hit more home runs if he can create more lift in his swing. It's not about hitting flyballs. It's just about getting the ball off the ground. His 90-mph exit velocity will turn into line drives and long flyballs with a higher launch angle. That is a natural development that will be important to monitor over the next couple seasons. For now it's encouraging to see him making contact and putting the ball in play.