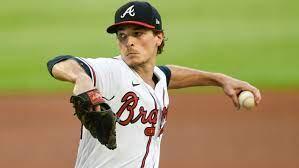 Noah Syndergaard signed a one-year, $21 million deal with the Angels prior to the lockout. Syndergaard was able to make two appearances late last year as he recovered from Tommy John surgery. He enters a situation for the Angels that includes a six-man rotation. This could be a great way to limit his innings pitched because he's thrown just 2 IP at the major league level since the end of the 2019 season. Whatever team that signed him was going to limit his innings anyway. The concern with Syndergaard is that he only touched 94.7 mph on the fastball and did not throw an off-speed in those 2 IP in 2021. It could be nothing but it could also be something, which means that he is even riskier from a fantasy perspective. He was already someone whose results didn't quite meet the talent, so he is someone to stay away from and let someone else take on the risk. With that being said, the pitchers going around him (Urquidy, DeSclafani, Means, and Wood) all have similar risk profiles. I would rather bet on the guys that were on the mound pitching last year.

Sixto Sanchez's recovery from shoulder surgery is going slower than expected. Recent reports from John Heyman indicated that Sanchez may not be back until the middle of the summer. This makes it very hard to draft Sanchez this year. Shoulder injuries are notoriously difficult for pitchers. Recoveries tend to be slow and there is no guarantee that he gets all the way back. Prior to the injury, Sanchez looked like one of the better young starters in the game. He made seven starts in 2020 and posted a 3.46 ERA and 1.21 WHIP. He did a great job getting ground balls (58% GB) which helped keep the ball in the yard (0.69 HR/9). Despite the strong showing his 4.18 SIERA gave pause in 2021 that his skills weren't quite in line with his results. This was mainly due to a low strikeout rate (20% K) which would limit his ceiling. With the current news of his slow recovery, he is someone to avoid during draft season.

Robbie Ray signed a five-year, $115 million deal with the Mariners coming off his brilliant 2021 season. Ray posted a 2.84 ERA and 1.04 WHIP with 248 K. He was able to break out due to a massive improvement in his walk rate (7% BB). He went from routinely posting double-digit walk rates to controlling the zone while continuing to miss bats (32% K and 16% SwStr). Ray is likely to see regression in 2022 but a move out of the AL East and to a pitcher-friendly park (T-Mobile Park) should help lessen the regression. He is going to continue to miss bats which gives him a nice floor for those who are worried about his walk rate regressing in 2022. This is why he is being taken as the 14th pitcher off the board n NFBC drafts.

Marcus Semien signed with the Rangers prior to the lockout. This is a good move for him but will cause his fantasy value to take a hit. For starters, the Rangers lineup is improved with Semien and Corey Seager but it still lacks depth at the bottom of the order and is nowhere close to an offensive juggernaut like the Blue Jays. Semien was extremely valuable last season (.265 AVG, 45 HR, 115 R, 102 RBI, and 15 SB) but he was going to regress regardless of the change in team and park. The most likely spot for regression was going to be the 45 HR. He had career highs in FB% and Barrel% but 45 HR is still not a likely outcome going forward (30-35 HR). Semien is going to continue to run in Texas and plays every day which has resulted in 700+ PA in three straight full seasons which gives him an incredibly high floor for fantasy. He may experience regression and will fail to replicate 2021 but that doesn't mean that he can't still return value in 2022.

Corey Seager signed a 10-year, $325 million deal with the Rangers. The Rangers would not have signed Seager to a 10-year deal if they did not believe in his ability to stay healthy over that time period. He hit .306 with 16 HR, 54 R, 57 RBI, and 1 SB in 95 GP. Seager remains an excellent source of batting average to go along with just enough power to be a true four-category contributor. He hits the ball hard (49% Hard and 12% Barrels) and combines that with an excellent plate approach (19% K and 9% BB). His counting stats are going to take a hit leaving the Dodgers but he could help make up for that with a healthy season. Seager is being drafted as the 12th SS off the board and pick #79 which puts him in fifth round in 15-team leagues and 6th round for twelve teamers. This could end up being a nice value if your team has enough steals prior to this pick.

Max Scherzer signed a three-year, $130 million deal with the New York Mets. This is a massive deal for the 37-year-old right-hander. He is coming off a tremendous regular season (2.46 ERA 0.86 WHIP, 34% K, and 5% BB) but experienced dead arm in the playoffs with the Dodgers. Scherzer and the Mets are not putting much stock in his age or playoff performance. The underlying skills last year were amazing. He missed bats (34% K, 16% SwStr, and 32% CSW), controlled the zone (5% BB), and posted strong ERA indicators (2.90 SIERA). Scherzer will also benefit from moving to the pitcher-friendly confines of Citi Field. This makes him a top-five starter despite his advanced age.

Starling Marte signed a four-year, $78 million deal with the New York Mets. Marte is coming off a great fantasy season (.310 AVG, 12 HR, 89 R, 55 RBI, and 47 RBI). The stolen bases tied a career-high and he has stolen 20+ bases in every season outside of his rookie year (47 GP) and 2020 (61 GP). He is unlikely to steal 40+ again but penciling him in for 25-30 is realistic. He also gets a nice lineup boost leaving MIA/OAK. The only concern with Marte in his eight full seasons he has played in 140+ games just once. Penciling missed time is a smart move when projecting Marte. He also has increased health risk due to his propensity to get hit by pitches. Marte has double-digit HBP in six of eight full seasons. With that being said finding 30+ SB with five-category production is hard to find.

Eduardo Rodriguez signed a five-year, $77 million deal with the Detroit Tigers. Rodriguez gets a nice boost leaving the AL East and moving to the AL Central. He also gets a nice park boost with Comerica Park being a pitchers' park. He is coming off a rough 2021 season (4.74 ERA and 1.39 WHIP). The underlying skills painted a different picture (3.65 SIERA). He posted above-average strikeout (27% K) and walk rates (7% BB). He was hurt by a .363 BABIP and 70% LOB. Rodriguez should experience better fortune on batted balls, which makes him a nice bounce-back candidate in 2022.

Max Fried's ADP is 73 in NFBC drafts since the middle of February. Fried is coming off a very strong 2021 season. He posted a 3.04 ERA and 1.09 WHIP with 18% K:BB. His strikeout rate is not great (24% K) but when paired with good control (6% BB) and above-average ground balls (52% GB) makes for an elite combination. Fried was also brilliant in the second half (1.74 ERA and 0.85 WHIP). He doesn't have an elite fastball but he has two above-average breaking pitches (CB and SL). Fried isn't going to repeat his second half but he could produce a 3.50 ERA with an above-average WHIP on a good team and still return value for his owners.

Giovanny Gallegos is being drafted as a sure-fire closer. He is going around pick #113 (ADP) as the 11th closer off the board. Gallegos was excellent as a reliever last year (3.02 ERA and 0.88 WHIP with 31% K). He clearly has the skills to be an elite closer and has looked good with the job (14 SV in 2021) but the Cardinals fired Mike Schildt in favor of a more analytically driven manager, Oliver Marmol. This is bad news for the Cardinals having a set closer because the modern trend is to use your best reliever in the highest leverage situations not the ninth. It also saves the team money by spreading out saves among relievers. This adds serious risk to Gallegos starting the year with the job and holding it all year long which makes it hard to draft him at his current ADP.

Carlos Rodon remains a free-agent after an excellent 2021 season (2.37 ERA, 0.96 WHIP, and 28% K:BB). Rodon missed more bats than ever (35% K and 15% SwStr) while showing an improved walk rate (7% BB). He did benefit from a .267 BABIP and 82% LOB but the core skills were excellent which is why he posted a 2.96 SIERA. The reason why he is not being drafted higher (#130 NFBC ADP) is that there are questions about his health (shoulder). One of the major themes of this off-season has been the questioning of his health because no team had signed him prior to the lockout. Rodon will be one of the biggest risers or fallers depending on the reports coming out of camp. The key indicator will be fastball velocity because everyone is in the best shape of their life and "healthy" when Spring Training rolls around. The skills are there for him to be a dominant starter; it all comes down to health.

Joey Votto had a breakout season at the age of 37 in terms of power (36 HR and .297 ISO) after struggling in 2020 (.226 AVG and 11 HR in 54 GP). It was backed up by drastically improved batted ball quality. He set career highs in maxEV, Hardhit%, and Barrel% by changing his approach from one focused on OBP to one focused on hitting the ball hard. He is likely to keep the power gains which means that he is no longer going to be a batting average asset but should return nice value where he is being drafted (16th 1B).

Jonathan India was a pleasant surprise for both the Reds and fantasy managers. India burst onto the scene and hit .269 AVG with 21 HR, 98 R, 69 RBI, and 12 SB. He provided five-category production with the underlying skills (22% K, 11% BB, and 10% Barrels) to back it up. With an everyday job in hand, India is a great pick this year because of his across-the-board production and there will be people who don't believe in him simply because he lost prospect sheen prior to breaking out.

Dansby Swanson hit .248 with 27 HR, 78 R, 88 RBI, and 9 SB in 160 GP for the Braves. The good news is that Swanson's ADP hasn't moved much from a year ago despite his good season. He set a career-high in home runs due to career highs in maxEV, Hardhit%, Barrel%, and FB%. This makes it likely that he continues to be a 20+ HR bat with good counting stats hitting in the Braves lineup. The average should come up into the .250-.260 range which isn't going to kill you and his 5-10 SB helps without sacrificing the other categories.

Josh Jung had surgery on Wednesday to repair a torn labrum in his left shoulder. This will essentially end his 2022 fantasy season. Jung was projected to be the Rangers starter at third base for most of the season. He was going to offer offensive upside as a rookie at a reasonable cost but that is out of the picture now. This also means that Isaih Kiner-Falefa is going to open the year as the Rangers starting third baseman. He hit .271 with 8 HR, 74 R, 53 RBI, and 20 SB which is not a terrible fantasy season but it ignores the fact that he had a .670 OPS and .293 wOBA which are two signs that he is a well below-average hitter. This makes it likely that he loses playing time going forward. This makes him an incredibly risky pick for fantasy even with his speed potential.