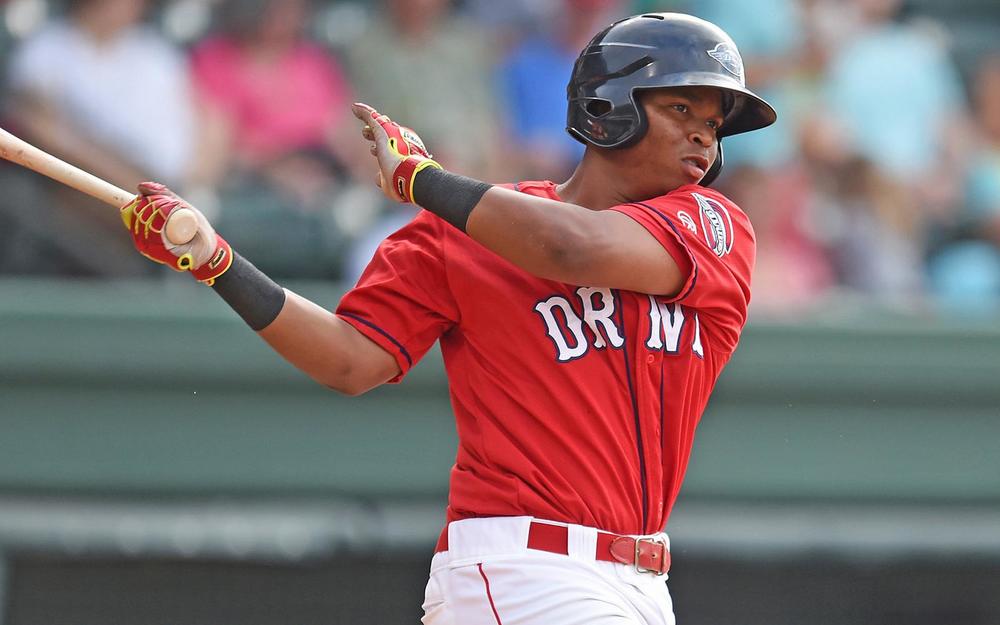 Devers hit his 5th HR of the spring against the Twins on Thursday, and now has a .421 BA and 1.666 OPS this March. We didn't need to see a strong spring to have faith in Devers, but it's certainly nice to see that he's rolling heading into the regular season. From 2019-2021, Devers compiled a .290/.350/.537 slash line, with 81 HR's and 271 RBI across 369 games. That RBI total is second only to Jose Abreu during that 3-year span. Devers combines a solid contact rate with a strong HardHit% (51.5% in 2021) to make an excellent fantasy 3B. He's currently going on average in the 2nd round and should be a good value there.

Dalbec hit his 3rd HR of the spring on Thursday and is now hitting .370 with a 1.229 OPS across 10 games this spring. Dalbec should continue to be a cheap source of power for fantasy owners; he has smashed 33 HR's in 156 career MLB games and those numbers are backed by a strong career 47.5% HardHit%. Don't expect anything in the BA department though, as he's a career .243 hitter, and that number could be even worse considering his bloated 35.8% K%. Dalbec's high strikeout tendencies make him prone to slumps and could potentially cost him playing time, but he should provide power as long as he is in the Red Sox lineup.

Wacha allowed 3 ER's on 5 hits in 4 IP against the Twins on Thursday, striking out 5 without a BB, as he tries to make a case for a spot in the Red Sox rotation. Once a promising starting pitcher for the Cardinals, Wacha has struggled for several years now, and has compiled a 4.62 ERA since the start of 2016. Over the past two seasons, his GB% has dropped under 40% which has led to robust HR totals. Pitching in Boston isn't likely to help matters, making Wacha a risky bet for a bounceback.

Castillo went 1-3 with a HR against the Orioles on Thursday, and is now up to 4 HR's already this Spring. The 24-year old infielder has yet to play a game in the major leagues, but his hot hitting has made him a candidate for the Pirates Opening Day roster. Castillo has been a very good contact hitter throughout his MiLB career, but he never hit for power - until last season when he hit 19 HR's in 104 games between AA and AAA. He seemed to change his approach as he progressed through the minors, as his FB% was north of 40% last season, a number that had been around 30% earlier in his career. Even if he would make the Pirates roster, it's unclear how much he would play, although it's not like the Pirates lineup is log jammed with superstars.

Despite a solid sample this spring in which he went 5-15 with 2 HR's, Cruz will start the season in AAA as he was demoted to Indianapolis earlier in the week. The 6"7 shortstop has plenty of power - he hit 18 HR's in 70 games last season between AA, AAA, and 2 games in MLB - and he should be a fantasy relevant shortstop once the Pirates make their starter. That may happen at some point in 2022, but for now the team seems content with Kevin Newman as the starting SS. He's probably not worth drafting in most leagues at this point, but keep an eye on him for when he does get the call.

With Oneil Cruz back in AAA, Newman seems to be in line to open the season as the Pirates starting SS. After a strong 2019 in which he hit .308 with 12 HR's and 16 SB's in 130 games, Newman has struggled offensively over the past two seasons combining to hit .226 with just 6 HR's and 6 SB's across 192 games. The low BA is surprising considering that he posted an elite 7.4% K% last season, and he's likely to see some positive regression to his .236 BABIP and to his overall BA. However, his HardHit% (career 25.1%) remains very weak, so his BABIP could very well remain on the low end, and we shouldn't expect any significant power. He won't be useful in fantasy unless he starts stealing bases again, and there's a strong chance he loses his starting job at some point this year anyways.

Hayes sprained his ankle earlier in the week, and it's unclear at this point if his availability for Opening Day is in jeopardy. Hayes was a disappointment in 2021, hitting .257 with 6 HR's across 96 games, while missing two months due to injury. He continued to make solid contact (22.0% K%) and could potentially improve in that area as he posted an excellent 8.5% SwStr% last season. He also continued to hit the ball hard (45.1% HardHit%) but didn't hit enough fly balls (25.3% FB%) which stifled his HR total. Even with the modest FB% though, his 8.6% HR/FB in 2021 seems rather low. That can be at least partially explained due to his low Pull%, so it's really a question of whether or not Hayes is able to change his batted ball profile to reach his power potential. Expect Hayes to have a stronger 2022 - the question is how much stronger.

Franco struck out 3 times against the Braves on Thursday, and hasn't done much this spring, hitting just .174 with 1 XBH thus far. Franco displayed excellent contact skills last season (12.0% K%) en route to a solid .288 BA, although he didn't exactly light the world on fire with 7 HR's and 2 SB's in 70 games. His Statcast numbers were rather middling last year, he posted a 37.6% HardHit% and 88.2 EV. But as a top prospect, there's obviously the possibility that he breaks out this season, which is why fantasy owners are spending a high draft pick on him. Just keep in mind that you would be drafting someone on the 4th round who hasn't yet proven their power or speed at the big-league level.

Manoah struck out 3 in 4 scoreless innings against the Tigers on Thursday as he gets tuned up for the regular season. Manoah posted a strong 3.22 ERA and 10.24 K/9 as a rookie in 2021 and limited opponents to a 31.2% HardHit%. He may see some regression to his ERA as his xFIP was 4.17 and he benefited from a .246 BABIP, however limiting hard contact likely helped him beat his peripherals. An ERA under 4.00 and a K/9 over 10.00 are reasonable projections for Manoah in 2022.

Crawford went 3-4 with a HR and a double against the Rockies on Thursday as he looks to repeat his breakout performance from a year ago in 2022. It's not every day that a player has a career year at age 34, but that's exactly what Crawford eason, posting career highs in BA, OBP, SLG, HR, RBI, runs, and SB's. Crawford's HardHit% in 2021 was a career high, and his FB% was also 7% above his career average. Another 20 HR, 75 RBI season is realistic for Crawford, which could make him a good value if he's still hanging around towards the end of drafts.