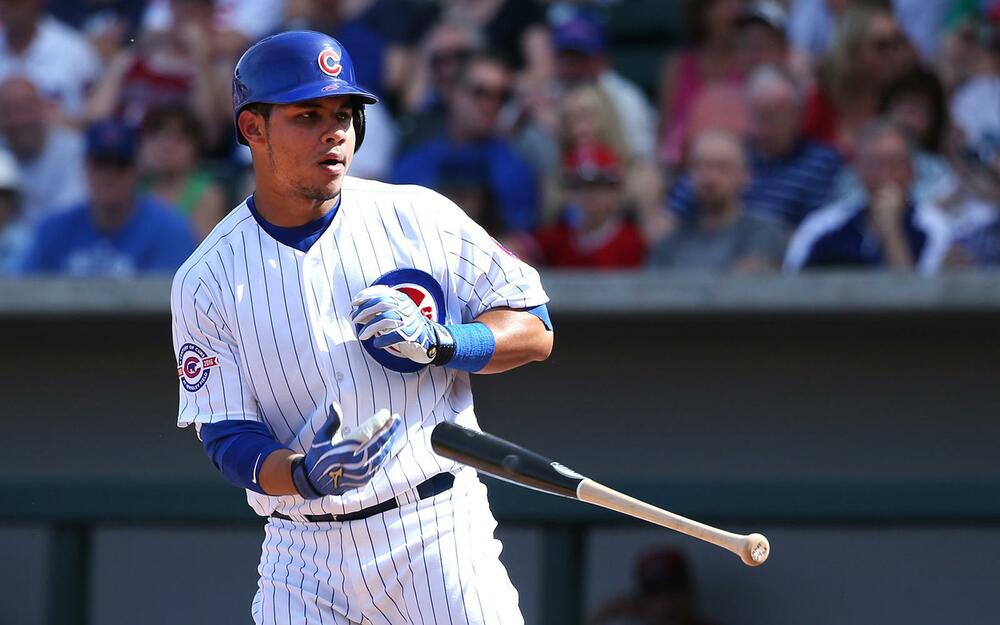 Willson Contreras was the driving force behind Chicago's 9-0 win over Pittsburgh on Monday, going 2-for-5 with a double, a homer, two runs, and four RBIs from the leadoff spot. Contreras ignited the Cubs' eight-run first inning with a leadoff double and promptly scored two batters later. Chicago batted around, and Contreras capped the inning with a grand slam to center field, essentially ending the game before it started. Contreras went hitless in his three remaining plate appearances but still raised his average to .283 and his OPS to .906. Contreras has been hitting first or second for most of May and has benefitted from moving up in the order, hitting .382 with three home runs and seven RBIs over his last 10 games. One of the few remaining members of the 2016 title team, Contreras continues to be one of the best-hitting backstops around and could be headed for a third All-Star nod. In addition to his outstanding rate stats, he also has 13 extra-base hits, 14 RBIs, and 22 runs over his first 29 games. While he doesn't have a ton of help in Chicago's rebuilding lineup, his spot in the top third of the order gives him some upside and makes him an elite contributor at a thin fantasy position.

Corey Kluber settled for a no-decision on Monday after allowing two runs on four hits and no walks with eight strikeouts in six innings vs. the Tigers. Kluber returned to form after getting pounded for eight runs on 11 hits in three innings during his last outing, limiting the damage to a two-run homer by Jonathan Schoop in the fourth inning. The 90 pitches and eight whiffs were a season-high for Kluber, who's shown good command this year with a 35:6 K/BB ratio through 35 2/3 innings. Kluber now has three quality starts in his last four outings and has pitched quite well this year overall, except for last week's blowup. The two-time Cy Young winner is proving to still be an effective pitcher at age 36, but the biggest question at this stage in his career is weather his arm can hold up for a full season. Kluber has not thrown more than 80 innings since 2018. The Rays have done a good job limiting his workload thus far by not letting him pitch beyond the sixth inning or approach 100 pitches, but fantasy managers should expect him to miss time at some point. He'll be a must-start in all formats when the Rays take on the Orioles in Baltimore this weekend, especially given how favorable Camden Yards has been for pitchers this year.

Anthony Santander swatted a pair of homers against the Yankees on Monday, going 2-for-4 with two solo shots. Santander accounted for both of Baltimore's runs in their 6-2 loss to New York, taking Luis Severino deep in the fourth and Aroldis Chapman yard in the ninth. Monday marked Santander's first multi-homer game of the season and snapped him out of a 1-for-17 funk at the plate. The hits and homers have come sporadically for Santander, who's batting .233 with six bombs, 16 RBIs, and a .767 OPS through 36 games. While the fences being moved back at Camden Yards won't help his power output, he still has a good chance to surpass 20 homers for the first time in his career and could conceivably approach 30. He's also shown dramatically improved plate discipline in his sixth MLB season, as he's already just four walks shy of his career-high (23) thanks to a personal-best 13.1% walk rate. That makes his low batting average more palatable to fantasy managers in points leagues in OBP formats, although his weak supporting cast ultimately limits his run production as well. With three home runs in his last four games, perhaps Santander's power production will start to pick up as the weather warms.

Sandy Alcantara tossed an absolute gem on Monday, earning the win with eight innings of one-run ball against the Nationals. Alcantara yielded just three hits and one walk while striking out five, throwing 71 of his 100 pitches for strikes and lowering his ERA to 2.49 in the process. Alcantara allowed a quick run in the first inning but settled into a groove after that, dominating Washington's hapless lineup for his third win of the season. This is already Alcantara's second eight-inning start of the season and third of at least seven innings, as manager Don Mattingly has let him throw at least 94 pitches in seven straight starts. Alcantara's averaging 6 1/3 innings per start this year, which is impressive given the reduced workloads of many pitchers around the league following an abbreviated spring training. Alcantara continues to be one of the most reliable arms in fantasy and could be headed for a career year in his age-26 season. He'll have a tougher matchup against the defending World Series champions this weekend, but at least he'll be at home.

Anthony Rizzo popped his 10th homer of the season on Monday, going 1-for-5 with a solo shot and two runs scored against the Orioles. It took Rizzo until his final at-bat of the game to smack his first big fly of May, ending a 12-game, 47-at-bat homerless streak to begin the month. Rizzo's cold spell came on the heels of a torrid April in which he crushed a league-leading nine home runs and slugged .675. He's only managed just three extra-base hits since then, however, and is batting a mere .143 over his last 15 games. While the streakiness is certainly frustrating for fantasy owners, his overall numbers remain strong except for his .224 batting average, which isn't that far off the league average. Even with the recent slump, fantasy gamers will glady take his 10 homers, 24 RBIs, 21 runs, and .856 OPS at this stage in the season. Rizzo is enjoying his best offensive season in years and should continue to flourish with a favorable home park and a bevy of offensive talent around him.