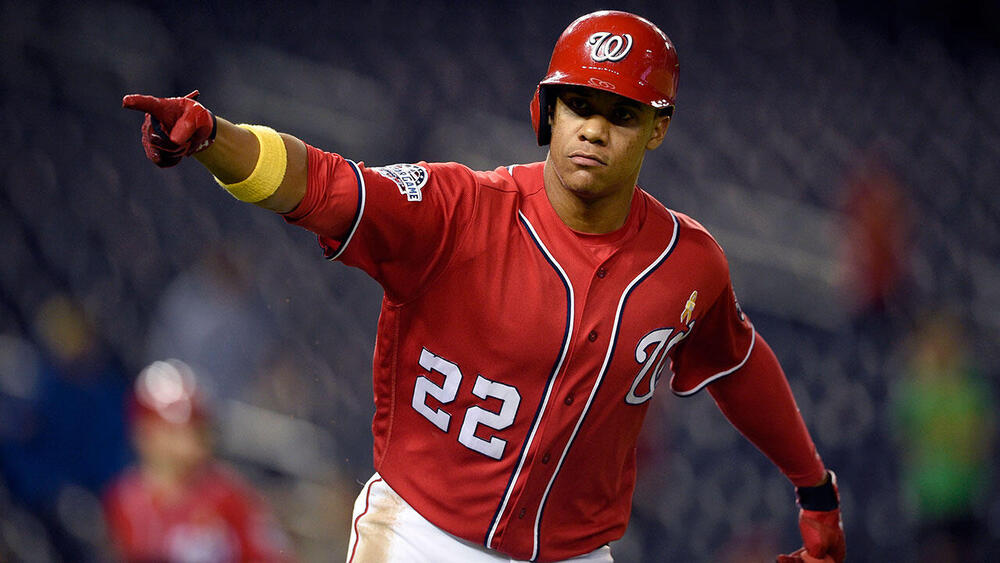 Juan Soto sparked the Nationals to a 6-5 win over the Rockies on Sunday, going 2-for-3 with a double, a two-run homer, and a walk. Soto erased a 1-0 deficit in the bottom of the first with his ninth homer of the year, then later add his 10th double and MLB-leading 40th walk for good measure. Sunday marked Soto's first mult-hit game since May 12 and ended a 5-for-44 (.114) rut over his previous 13 games. It's been a bit of a slow start for Soto based on his .236 average, which helps explain why he only has 16 RBIs despite his strong power numbers (the walks also have something to do with that, too). Soto started last season slow as well before putting together a monster second half and finishing second in the NL MVP race to Bryce Harper, so fantasy managers just have to remain patient with the 23-year-old superstar, especially for those in points leagues and OBP formats where his walks are extra valuable.

Tyler Mahle settled for a no-decision on Sunday despite twirling 6 2/3 innings of one-hit shutout ball against the Giants. Mahle permitted just a double and three walks while matching his season-high in strikeouts with eight in what was his longest and most effective start of the season to date. Given that he pitches for the Reds, however, he did not earn the win as Cincinnati's porous bullpen surrendered six runs in the eighth inning after he departed. Regardless, it was an encouraging rebound performance from Mahle, who surrendered eight runs on nine hits in four innings during his previous outing. While his 2-5 record and 5.53 ERA aren't pretty, they're largely due to bad luck and obscure the fact that he's been pitching pretty well over the past few weeks. He's now allowed two earned runs or less in four of his last five starts and deserves fantasy managers' trust again following a bumpy April. He'll be a must-start in a friendly home matchup against the lackluster Nationals in his next outing.

Nick Pivetta dominated the Orioles on Sunday, limiting Baltimore to one run on on five hits and three walks with five strikeouts to earn his fourth win of the season. Pivetta didn't allow a run until the fifth inning, by which point Boston had already scored six runs and was well on its way to a 12-2 rout. After getting torched in his first three starts of the year (0-3, 10.03 ERA), Pivetta has quietly been one of the best pitchers in baseball since early May. He's now won four straight starts and has logged five straight quality starts, yielding just six earned runs during that time to bring his ERA below four (3.95). The biggest key to Pivetta's turnaround has been limiting his walks, as he's issued just six free passes in 38 1/3 innings this month compared to 13 walks in 16 1/3 innings during April. While Pivetta has always been inconsistent, his outlook will be much better if he can maintain the reduced walk rate going forward, especially pitching in the AL East and with half of his games at Fenway Park. Pivetta will look to stay hot with an easy road start against the A's up next.

Jorge Soler launched a pair of homers on Sunday, going 2-for-3 with two long balls, three RBIs, and a walk against the Braves. Soler accounted for all three of Miami's runs against his former team with a first-inning solo shot and a two-run shot in the seventh inning. The game was Soler's first multi-homer effort of the season and continued an impressive hot streak for the slugger. After an ice-cold start to the season, Soler has caught fire with eight home runs and 17 RBIs over his last 16 games -- looking like the player who led the AL with 48 round-trippers in 2019. While he's unlikely to ever come close to reaching that number again, Soler already has 11 dingers under his belt and could be well on his way to surpassing 30, especially after clubbing 27 last year. While his streakiness can be frustrating, the power numbers are worth it, even in a thin Miami lineup. The opportunity to snag him off waivers or buy low on him has likely sailed, however.

Josiah Gray earned the win on Sunday after tossing five innings of one-run ball against the Rockies, yielding three hits and four walks with three strikeouts. Gray settled down after allowing a leadoff homer to Charlie Blackmon in the first, keeping Colorado off the board beyond that. As his 5-4 record and 5.08 ERA can attest, it's been an up-and-down campaign for the 24-year-old thus far. While he's shown flashes of promise, he's often alternated good starts with bad starts and his still searching for consistency in the big leagues after debuting last year. His high strikeout rate (9.5 K/9) gives him fantasy appeal in deeper leagues and as a streaming option, but he's a better stash for the time being until he improves his command (4.4 BB/9) and truly takes off. He'll be worth starting in an appealing road matchup against the Reds for his next scheduled start.