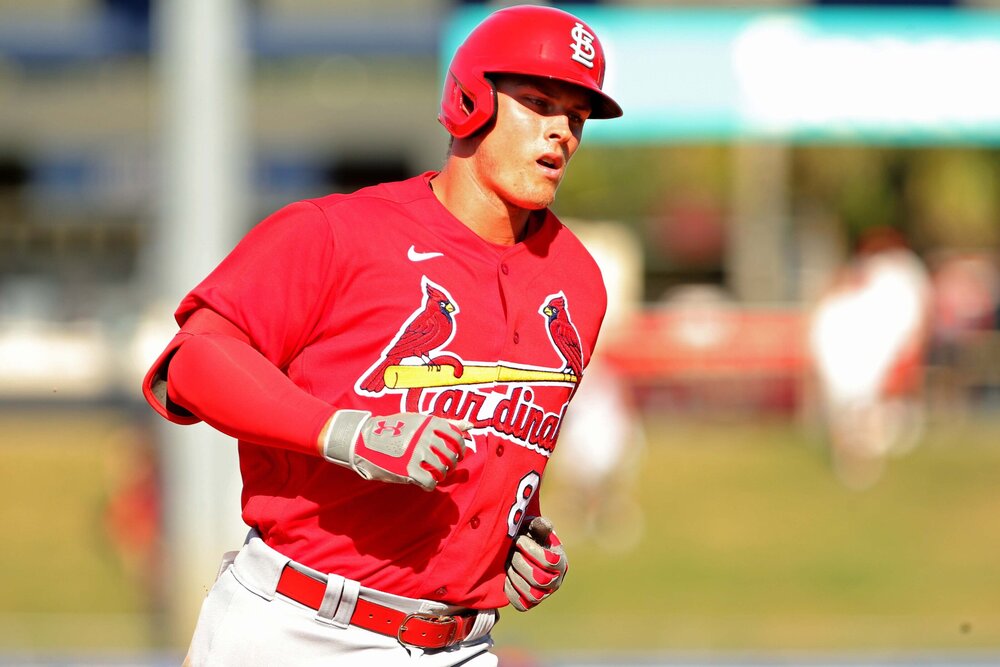 Nolan Gorman (2B-STL) went 1-5 with a 3-run blast against the Cubs on Friday afternoon. The 22 year-old has started his big-lead career with a bang, as he's hitting .361 with 3 homers and 10 RBI across his first 41 plate appearances. Sure, the average will come down quite a bit as a .476 BABIP is simply unsustainable and his strikeout rate is - based on his minor-league track record - unsurprisingly high at 29%, but the power is legit. In the small sample size, Gorman has made a good bit of hard contact (43%) while posting a 52% line-drive rate and hitting grounders only 10% of the time. So, while his prospect pedigree does indicate that he should be a productive big-leaguer, his numbers will settle going forward, making him a good sell-high candidate if anyone in your league is interested in him. The surface numbers are nice, but some of the stuff under the good - such as a 15% swinging-strike rate and a 71% contact rate - indicate that the average will come down a good bit going forward.

Nelson Cruz (DH-WSH) went 3-5 with a solo shot against Cincinnati on Friday evening. The 41 year-old has come on strong of late and is now batting .240 with 5 dingers and 28 RBI across 205 plate appearances on the campaign. His strikeout and walk rates are both solid, with his 11% walk rate right about where it's been the last few seasons while his strikeout rate is actually down a good bit from the last few years. The hard-hit rate is low for him (31%), but has been climbing of late. And with it has come production, as Cruz hit just .155 in April before batting .318 in May. While he hit only a pair of homers each month, that he's already slugged his first of June is encouraging. Consider picking him up if he was dropped in your league.

Shane McClanahan (SP-TB) put together yet another strong outing as he allowed 2 runs on 6 hits and no walks while fanning 8 White Sox over 6 innings of work on Friday evening. The 25 year-old southpaw fired 66 of his 92 offerings for strikes in the contest and did allow a homer. McClanahan has broken out in 2022, as he now boasts a 2.10 ERA, 12.5 K/9, and a 1.7 BB/9 through his first 11 starts (64.1 innings), with a 1.86 xFIP indicating that he's actually run into a little bit of bad luck along the way (a 20% HR/FB is the culprit there). Other than the longball issue when he does give up a flyball (26% flyball rate), McClanahan has been fantastic, posting a stellar 17% swinging-strike rate and slashing his BB/9 from last year's 2.7 rate. He lines up for a start against St. Louis at home next week.

Marcus Stroman (SP-CHC) got shellacked by the Cardinals on Friday afternoon, allowing 9 runs on 10 hits and a walk while striking out 7 over 4 innings of work. The 31 year-old righty surrendered 3 homers while throwing 63 of his 90 offerings for strikes in the outing. It's been an undeservedly bad year so far for Stroman, as his ERA comes in at 5.23, but his 3.37 xFIP points to a low 58% strand rate and elevated 17% HR/FB inflating his ERA. His 8.6 K/9 is on pace to be a career high while his 2.3 BB/9 is slightly below his career average (2.5). It may not be all poor luck however, as Stroman's groundball rate is way down to 42% (57% career) as he's deploying his sinker at a career-low 33% clip (42% career) while leaning on his heater (10%) and slider (30%) more than usual. He's looking at a start in New York against the Yankees next week.

Vinnie Pasquantino (1B-KC) has been producing in Triple-A this season, as the 24 year-old was hitting .291 with 15 homers and 52 RBI over 208 PA entering Friday's action. He's commanded the plate very well, with a 13% walk rate and 14% strikeout rate to his name. As he has throughout his minor-league career, Pasquantino has ripped a healthy amount of liners (23%) while lofting flyballs at a clip (45%) that suits his size (6'4", 245 lbs.) and well below-average speed. While he does not have high power potential per scouting grades (roughly average to slightly plus), his hit tool is a plus and he did hit 24 big flies in 513 PA across High-A and Double-A last season. Given the lack of productive options that KC has at 1B, such as Carlos Santana (wRC+ of 64 across 147 PA) and Ryan O'Hearn (wRC+ of 49 over 51 PA), it's only a matter of time before the club calls up Pasquantino, and given his ability to hit for average with some pop, he's interesting for fantasy purposes.

Tweets by Fantistics
Baez on the Bench
Severino Coming Back in Leaps and Bounds- June 5, 2022