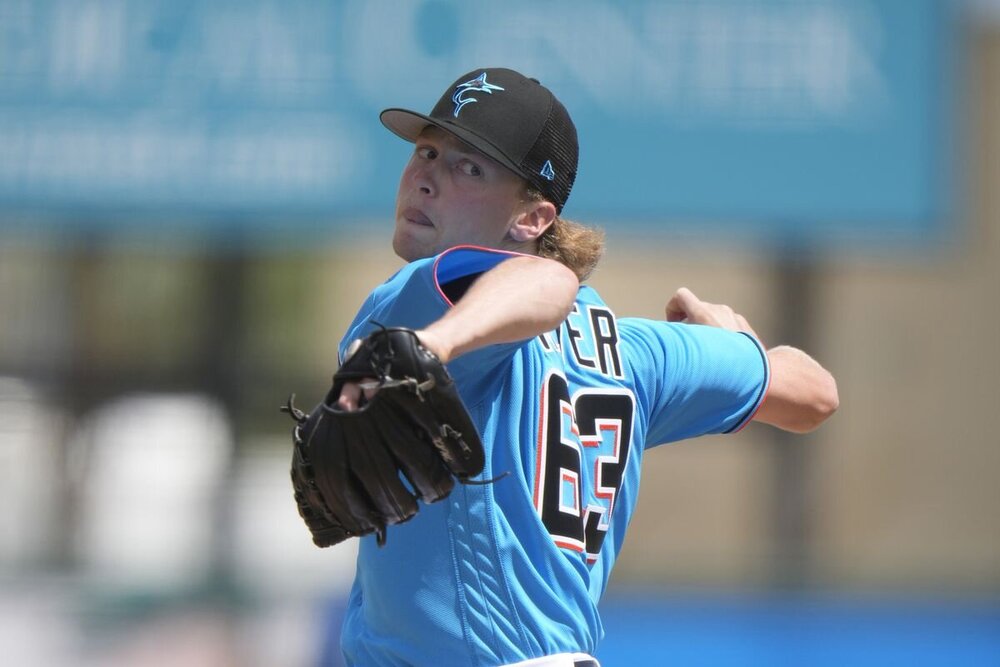 Max Meyer (SP-MIA) is expected to get the call to make his big-league debut against the Phillies at home on Saturday afternoon. The 23 year-old righty missed about a month of action earlier this season because of ulnar nerve irritation in his throwing elbow, but has been effective overall, logging a 3.72 ERA, 10.1 K/9, 3 BB/9, and 3.69 xFIP across 12 starts (58 innings). While those stats are solid (if unspectacular), Meyer's scouting grades point to a plus heater and a "devastating" slider that he complements with a fringy changeup and average command. Tha profile and his smallish frame (6', 195 lbs) do have some concerned about him ending up in the bullpen, but that is a longer-term issue as he's being promoted to start now. There's certainly some upside here given his punchout ability, but don't expect Meyer to pitch deep into games; he's completed 6 or more innings just twice so far this season. If you have a flexible roster spot, make the speculative add and see what happens.

Luis Severino (SP-NYY) was enjoying a pretty solid first full season back from Tommy John surgery, but will now be sidelined for at least the next two weeks after landing on the IL on Thursday because of what has been described as a low-grade lat strain. The 28 year-old compiled a 3.45 ERA, 9.9 K/9, 2.6 BB/9, and 3.47 xFIP across 16 starts (86 IP); all of those figures are just slightly behind what he did in his peak (so far) years of 2017-2018. Notably, his average fastball velocity is down about two ticks from that period as well to 96mph while opposing hitters have had less trouble squaring up on the ball against him (his current 40% hard-hit rate per Statcast is his highest since 2016). His swinging-strike rate, however, sits about where it did before at 13% while the opposition makes about the same amount of contact (74%) against him. Overall, for 2022 at least, it appears that a healthy Luis Severino can be counted on as a solid #2-3 option for fantasy rotations rather than the #1-2 that he was back in 2017-2018, although there's the possibility that he makes further progress as he puts his TJS further behind him.

J.T. Realmuto (C-PHI) had a fine day at the dish against Sandy Alcantara and the Marlins, going 3-4 with a 2B, an RBI, and a stolen base. The 31 year-old is in the midst of a second straight disappointing campaign, as he now has a .247 batting average to go with just 7 homers, 36 RBI, 39 runs scored, and a dozen steals across 314 plate appearances. While he should shatter his career-high mark of 13 steals from last season, the ongoing average decline (it's slowly descended from a high of .303 back in 2016) and power outage (his ISO is down for a second straight year now) are concerning. Excessive strikeouts aren't a problem (21% in 2022, 20% career) but his hard-hit rate is down to 30% (35% career) while he's hitting fewer liners than usual (18% in 2022, 21% career). The swinging-strike rate (10%) is actually down a little and his contact rate (78%) is up a little from the last couple of seasons, so it's not a clear-cut story of decline. With Realmuto potentially facing his first sub-100 wRC+ season (it's currently at 96) since 2015, his fantasy owners can't be blamed if they explore sell-low opportunities... but are there really better options at C available to replace him in most leagues?

Riley Greene (OF-DET) went 2-5 with a homer, a 2B, and 3 RBI as he batted leadoff against Cleveland on Friday. The 21 year-old rookie has enjoyed a solid start to his big-league career, as he boasts a .252 average to go with 2 homers, 11 RBI, 16 runs scored, and a stal across his first 118 plate appearances. As expected based on his minor-league track record, he is striking out some (24%), but he's clearly not overmatched at the plate and is showing patience and a keen eye by drawing walks at a healthy 13% clip. He's made hard contact at a solid 42% clip per Statcast, although a 55% groundball rate and 23% flyball rate are going to put a cap on the power output. Overall, it's encouraging to see a young rookie not chasing many pitches outside of the zone (28% o-swing%) and not swinging-and-missing often (9%), which engenders optimism that a bright future lies ahead for Greene.