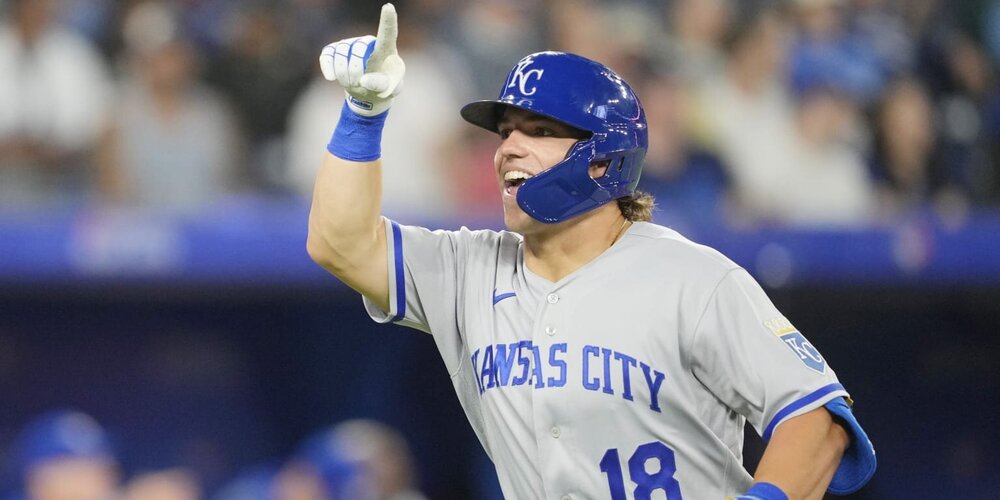 Eaton made his MLB debut against the Blue Jays on Thursday, and he didn't disappoint, going 1-4 with his 1st MLB homerun. With 10 Royals players unavailable for the team's series in Toronto, the team relied on several rookies on Thursday, and Eaton was one of them. The 25-year-old has shown plenty of pop and speed in the minors, as he has already racked up 13 HR's and 19 SB's in 76 games between AA and AAA this season. He has also displayed solid contact skills with a K% around 19%. It's unclear how long Eaton will stick with the big-league club, but he certainly didn't hurt his forecast with Thursday's performance.

Zerpa made his 1st start of the season against the Blue Jays on Thursday, and allowed 1 ER on 4 hits in 5 IP, while striking out 2 and walking 2. He had previously made one relief appearance with the Royals this year in which he pitched 2 scoreless innings, and made one start for KC in 2021 in which he didn't allow a run in 5 IP. Zerpa was given the opportunity to start in the big leagues despite minimal success in the high minors, as he posted a 5.02 ERA across two seasons at AA and has only pitched 1.1 innings at AAA. His big league career has gotten off to a much better start, although his 4.67 xFIP through his first two appearances this season may be a better indication of what to expect going forward.

Witt had another all-around fantasy performance on Thursday, going 2-4 with a HR and a SB against the Blue Jays. That makes 13 HR's and 17 SB's in 85 games for the rookie sensation, who has steadily raised his average to .252 for the season. Witt struggled in April, but since the start of May, he has been among the best players in fantasy baseball, hitting .262 with 13 HR's, 42 runs, 40 RBI, and 13 SB's across 66 games. He has a high 45.2% FB% so there could even be more upside in terms of the power. If he keeps going at his current pace, he could be considered as a first round draft choice in 2023.

Gray struggled again against the White Sox on Thursday, allowing 6 ER's on 9 hits and 1 BB in 3.2 IP, while striking out 3. It has been a rough start to July for Gray who has now allowed 14 ER's in 13.1 IP (9.45 ERA) across 3 starts this month. It hasn't just been bad luck either, as he has a very weak 8:6 K:BB during this stretch. The lack of strikeout actually started earlier; in 3 June starts, he posted a 5.63 K/9 (although he still managed a 1.69 ERA). Gray struck out over 10 per 9 innings in each of the past 3 seasons, so the decline in K's is troublesome. His ERA jumped from 3.03 to 3.71 with Thursday's loss and based on his recent performance, that number looks more likely to keep climbing rather than come back down.

McKenzie had a dazzling performance against the Tigers on Thursday, striking out 12 in 8 shutout innings, while allowing 5 hits and no BB's. This continues a dominant July for the right-hander, as he has now pitched 21 shutout innings with a 23:6 K:BB across his 3 starts this month. This comes after a June in which he struggled to the tune of a 6.44 ERA and allowed 10 HR's in 5 starts. McKenzie's strikeout rate has dipped significantly this year to 8.53 K/9 after posting a 10.45 K/9 over his first two seasons. However he has made up for that by lowering his BB-rate from 4.35 BB/9 in 2021 to 2.40 BB/9 so far this year. But one thing that has continuously plagued McKenzie throughout his career is the longball - he entered Thursday with a lifetime`1.57 HR/9. He has always allowed a near 50% FB-rate, and his 51.4% FB% this year would be a new career high, so the plethora of HR's isn't surprising. That doesn't mean he can't be good, but it is likely that he'll continue to have bumps in the road.