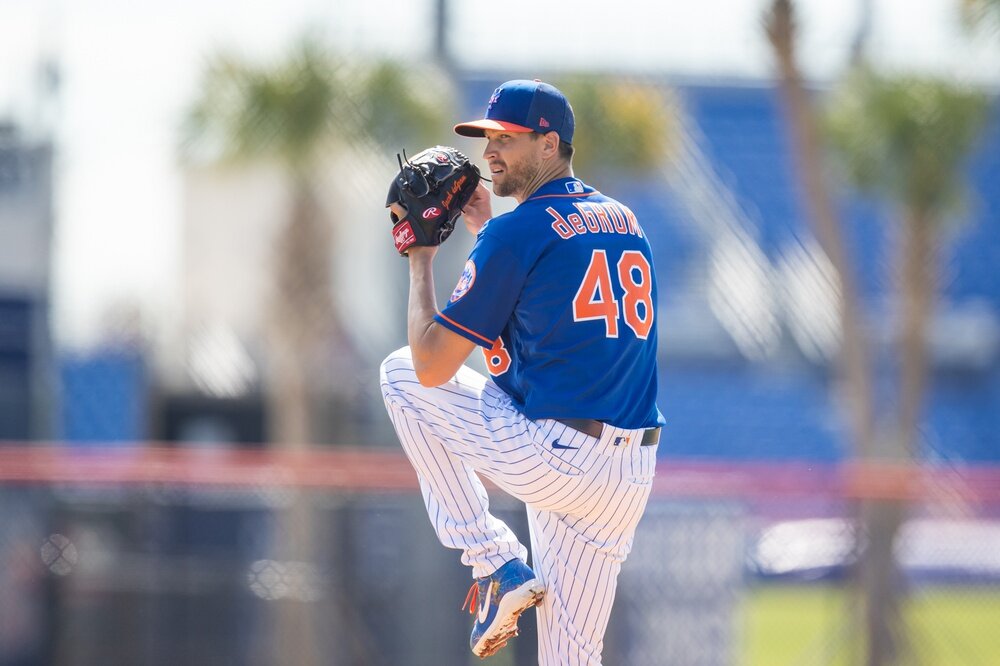 Besides a Ryan McMahon home run, deGrom was absolutely dominant on Thursday, allowing one run on three hits and a walk while striking out nine batters in six innings. His fastball velocity was "down" to 98.5 miles per hour, which pushed the veteran to use his slider more than 50% of the time. He generated a 45% CSW rate on that pitch, which hovered around 93 miles per hour. It was his second straight game throwing 85 or more pitches as the restrictions are slowly peeling away. He has a 1.19 xFIP with 46 strikeouts in 29.1 innings. Yeah, deGrom is back and he is as dominant as always.

Nola turned in his first complete game of the season, a 11-strikeout shutout against an uninspiring Cincinnati offense. The Phillies ace generated a 40% CSW rate, including eight whiffs on his knuckle curve, which he threw 29 times. On 101 pitches thrown, not a single ball was hit with an exit velocity over 101 miles per hour. It was Nola's second time allowing zero walks in a game since June 13. The peripheral stats told us he was better than last year's 4.63 ERA indicated, and he is proving that this year, as he heads into his next start with a 3.08 ERA, which actually happens to be higher than his xFIP. He continues to get swings and misses, but he has improved in limiting hard contact. In fact, his 31% hard-hit rate allowed is six points lower than 2021. Using his sinker as his third best pitch, instead of a mediocre changeup, has been key to inducing weak contact. Opposing batters have a .172 average against his sinker and it allows Nola to be more efficient, pitching to contact and getting weak ground balls. Despite eight seasons under his belt, Nola continues to learn and evolve while remaining one of the top fantasy starters in the game.

The Cardinals jumped all over Stroman, sending eight batters to the plate in the first inning and scoring three runs in the frame, which the Cubs were never able to catch up with. Stroman only allowed two more runs over the next four innings, but that fatal first was enough to send the veteran right-hander to his sixth loss on the season. He gave up a season-high 11 hits and tallied a season-low one strikeout, reminding fantasy owners that Stroman is very unpredictable and that the Cardinals are a very good offense. Thursday's dud pushed Stroman's ERA back over 4.00, which if the season ended today, would be only his second time in the last six seasons with an ERA over 4.00. However, Stroman's xFIP remains solid at 3.42 and his velocity is steady. Stroman's less-than-overpowering pitch mix leads to more precision, and when he is not precise, he will get bit. On Thursday, against a very good offense, he got bit.

Crawford continues to struggle. He allowed four runs in 4.2 innings on Thursday, giving up 10 hits and two walks while striking out five. He has now allowed at least four runs in three of his last four starts, and his ERA has ballooned from sub-3.00 at the beginning of the month to 5.30 following Thursday's outing. His fastball/cutter combination just isn't fooling opposing hitters anymore, and they are pounding his high-velocity pitches, forcing him to throw his curveball more, but that is an unreliable pitch for the young right-hander. After shocking fantasy owners with early success despite two straight AAA seasons with an ERA over 5.00, Crawford is starting to revert to the pitcher that struggled at the higher levels of the minor leagues. The book is out and opposing hitters are well-read on the Red Sox rookie.

Margot finished a home run shy of the cycle on Thursday, as his 4-for-5 effort improved his OPS to .798. He is 7-for-21 with three extra-base hits since returning from the 60-day injured list last week. A late June knee injury dampened what was turning into a stellar offensive season for the 27 year old, but he looks to be back to his pre-injury form. Margot surpassed the 2,000 career at-bats mark this season, but he has never reached 500 at bats in a single season. Once one of the top fantasy prospects in the game, Margot hasn't quite lived up to the hype. However, he has made strides this season that demonstrate the development needed to turn into a consistent fantasy starter. A more aggressive approach has led to a more balanced hitter. He is swinging at more pitches, including those out of the strike zone, but that has allowed him to hit the ball to all parts of the field. He has seen a dramatic decline in pull percentage and an uptick in line drive percentage. Those are not mutually exclusive, and it has led to a higher overall exit velocity and more base hits. His barrel rate is miniscule and it's unlikely he ever develops more than 15-20 home run power, but he could be a consistent boost for batting average, stolen bases, runs and RBIs at the top of the Rays lineup.