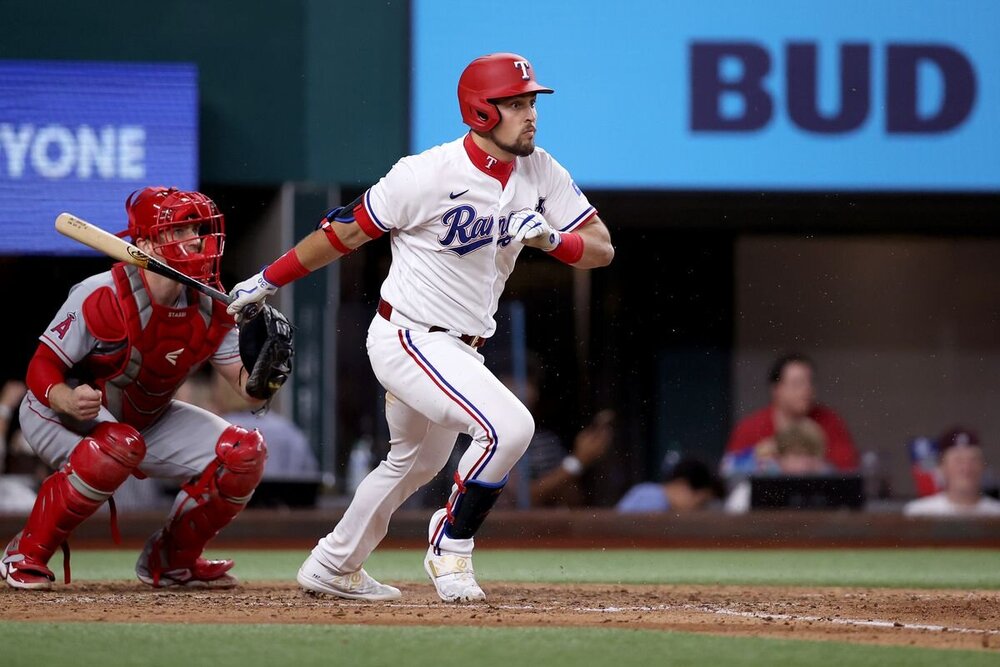 Nathaniel Lowe (1B-TEX) continued what appears to be a breakout campaign by going 3-6 with a 3B, a homer, 5 RBI, and 3 runs scored against the Rockies on Wednesday. The 27 year-old now boasts a .295 average to go with 20 dingers and 62 RBI on the year. The 20 homers are a career-best for Lowe, who came into the season with a track record of making plenty of hard contact (44% career) but also hitting lots of worm-burners (49% career, 55% in 2021). He's continued to make hard contact at a healthy 42% clip while slashing the groundball rate to 46% on the season. Encouragingly, he's hit grounders at a 42% rate since the All-Star break, during which time he was batting .349 with 7 homers and 19 RBI entering Wednesday's contest. Overall, he's simply been more aggressive at the dish (walk rate is down from 13% to 7%) while fanning less (down to 23% from 25%) as he's going after pitches he likes rather than looking to walk as he seemed to do last season. Overall, 2022 has shown significant growth for Lowe, who should enter the 2023 season with some buzz in fantasy circles.

William Contreras (C-ATL) had a productive day against the Pirates on Wednesday afternoon, going 2-5 with a 2-run shot, a walk, and 2 runs scored. The 24 year-old backstop has put together an impressive campaign, as he now owns a .264 average to go with 17 homers, 34 RBI, 37 runs scored, and a pair of steals across just 270 plate appearances. That marks a significant improvement on his 2021 season in which he hit just .215 with 8 dingers, 23 RBI, 19 runs scored, and 0 steals over 185 PA. He's trimmed his strikeout rate from 29% to 26% while continuing to draw walks at a 10% rate and is making hard contact at an identical 45% clip (per Statcast). All things considered, there may be some luck involved, as Contreras is hitting more groundballs (54%) while ripping liners at just a 14% clip, meaning that his HR/FB comes in at a 29% clip (22% last season). To be sure, there have been positive developments, as he chases less often (o-swing% is down about 5% to 31%) and is making slightly more contact (up from under 68% to just over 69%). He still swings and misses a good bit (14%), but that's down from last year's 16%. Overall, it's been an encouraging campaign for Contreras, but there is legitimate reason to wonder whether he can replicate the success he's shown in a relatively small (again, just 270 PA) sample size this season.

Matt Manning (SP-DET) fired 6 innings of scoreless ball against the Giants on Wednesday afternoon, scattering 5 hits and walking none while racking up 8 punchouts. The 24 year-old righty tossed 66 of his 95 pitches for strikes in the contest. The strong outing comes on the heels of an impressive start against the Angels last week in which he allowed just 1 run on 3 hits and a walk while striking out 6 over 6 IP. In fact, 3 of his 5 outings since returning from the IL on August 2nd have been objectively good (in the other, he fired 7 shutout IP in which he allowed 4 hits and walked 3 while fanning 7 against the Rays). The sample size is small one overall in 2022, as he's made just 7 starts (38 innings), but Manning is showing signs of improvement over his rough rookie campaign in 2021 (5.80 ERA, 6 K/9, 3.5 BB/9, 5.13 xFIP across 85.1 IP), as he now owns a 2.37 ERA, 7.3 K/9, 2.1 BB/9, and 4.09 xFIP. The gap between the ERA and xFIP does indicate that his 85% strand rate, .273 BABIP, and 6% HR/FB are all suppressing his ERA, but it's encouraging to see him raise his swinging-strike rate (up over 10% from under 7%) while walking far fewer batters. He lines up for a turn against the Mariners at home next week and I think he should be rostered and started in that one given his recent run of success.

Mitch Keller (SP-PIT) pulled his usual Jekyll/Hyde act on Wednesday, as he looked brilliant or stretches but ultimately got beat up by Atlanta, allowing 7 runs (2 earned) on 7 hits and 2 walks while fanning 5 over 3.2 innings of work. The 26 year-old righty fired 53 of his 82 offerings for strikes and allowed a homer in the start. Keller now owns a 4.50 ERA, 7.4 K/9, and 3.4 BB/9 through 118 IP on the year, with a 4.09 xFIP indicating that .333 BABIP and 69% strand rate are suppressing his ERA a bit; it's worth noting that his career BABIP is .362 while his strand rate is 69%. Keller has reigned in the walks a little bit after they were out of control last year (4.4 BB/9), but his K/9 has dropped again (was 8.2 last season) even though his average fastball velocity is up to a career high (just under 96mph). He just doesn't miss bats (8% swinging-strike rate), and an 82% contact rate does not pair well with a 39% hard-hit rate. There is good news, though, in that he's posted a career-high 50% groundball rate this season. All that said, he can't be trusted in Milwaukee next week.

Gunnar Henderson (SS-BAL) could be called up in the near future, so consider making the add now or be ready to do so once he is promoted. The 21 year-old, who is now the #2 prospect in baseball per MLB Pipeline, grades as having plus potential hit, power, and speed tools, making him an intriguing player for fantasy. He's even more interesting because, although he mostly has a background at SS and 3B, he's also recently taken in-game reps at 2B. After logging a .312 average to go with 8 homers and 12 steals across 208 Double-A PA in which he commanded the plate with a 20% walk rate and 18% strikeout rate, he's continued to produce at the Triple-A level with a .289 average, 11 dingers, and 7 steals over 283 PA. Although he's continued to show patience at the dish (13% walk rate), his strikeout rate has jumped to 26%. Especially given that he just turned 21 less than 2 months ago, his accomplishments to date - as he started the 2021 campaign in Low-A ball - are all the more impressive. So while his track record indicates that there is significant strikeout risk here, the combination of speed, power, and an improving approach at the plate are all exciting from a fantasy perspective.