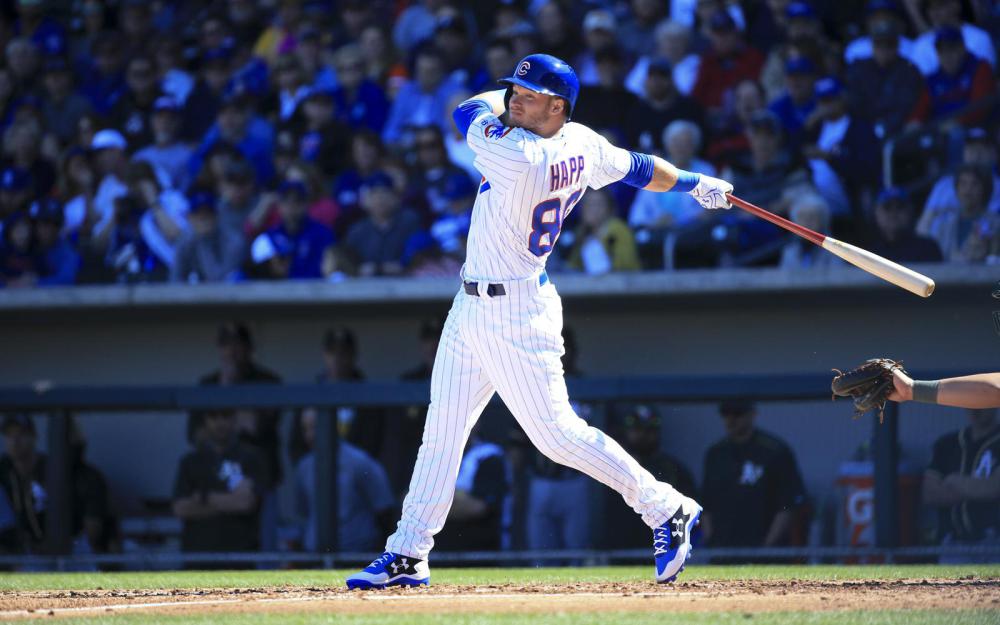 Ian Happ single-handedly willed the Cubs to victory over the Brewers on Friday, going 2-for-4 with two home runs and four RBIs. Happ accounted for all four of Chicago's runs in its 4-3 victory over Milwaukee with his go-ahead two-run homers in the seventh and 10th innings. Friday's effort was his second multi-homer game of the month, as six of his 15 long balls this year have come in his last 15 games. He has 14 RBIs during that stretch as well, boosting his season total to 62. Happ has been notably more productive since the trade deadline, when he was rumored to be dealt but ultimately stayed with the Cubs. The first-time All-Star's batting average is up to .280 alongside an .816 OPS and a career-high 33 doubles, making him a quality fantasy option again after a lackluster 2021 campaign.

Bryce Harper went 1-for-4 with two RBIs against the Pirates in his return from the IL on Friday. The reigning NL MVP picked up where he left off after missing two months with a broken thumb, ripping a two-run single in his first at-bat to give Philadelphia a 2-0 lead in the bottom of the first. Friday marked Harper's first MLB appearance since June 25, although he was able to return a few days ahead of schedule after tearing up his Triple-A rehab assignment earlier this week. Harper's comeback can't come soon enough for the Phillies, who are currently hanging onto a Wild Card spot and are eyeing their first postseason appearance since 2012. The two-time MVP is swinging the bat well and should provide a big lift to his team as well as fantasy teams down the stretch, so be sure to get him back into your lineups.

Yandy Diaz had a big game against the Red Sox at Fenway Park on Friday, going 3-for-4 with a double, a solo homer, two runs, a walk, and a stolen base from the leadoff spot. Diaz got the party started with a leadoff homer against former teammate Michael Wacha in the top of the first, kicking off a 9-8 slugfest between the two AL East rivals. He later singled, doubled, walked, and stole a base, finishing a triple shy of the cycle. While he hasn't shown a ton of pop (eight homers) or speed (two steals) this year, Diaz is still having a good campaign with a career-high 28 doubles, a .280 batting average, 66 walks, and an .801 OPS. He's also been hot lately with nine extra-base hits over his last 11 games, so perhaps his power stroke is finally coming around.

Jo Adell paced the Angels' 12-0 rout of the Blue Jays on Friday, going 4-for-5 with two home runs, three runs, and three RBIs. Adell led the assault from the seven-hole with a game-high four hits, including round-trippers in the seventh and ninth innings to put the game out of reach. Friday marked the third multi-homer game of Adell's career, which is actually surprising considering that he only has 13 long balls to his name. He's now recorded a two-homer game in all three of his MLB seasons, as this was his first in nearly a full calendar year (since Sept. 5, 2021). The 23-year-old former first-round pick has struggled to find his footing in the majors and spent a good chunk of the year in the minors this season. His big game also came out of nowhere, ending an 18-game homerless streak during which he batted just .200. While Adell has the tools to be a successful ballplayer, he's still trying to put it all together. There's still time for him to realize his potential, but fantasy GMs shouldn't get their hopes up until he starts hitting the ball more consistently.

Joe Ryan coasted to a breezy victory on Friday against the Giants, allowing just two hits and three walks with eight strikeouts over six shutout innings. The Twins' bats gave him a quick two-run lead in the bottom of the first before erupting for six more runs in the third, giving Ryan plenty of cushion against San Francisco's floundering lineup. He threw 69 of his 107 pitches for strikes en route to his 10th win, lowering his ERA to 3.65 in the process. The 26-year-old rookie now has 113 strikeouts in 113 1/3 innings and has settled into a nice groove lately, allowing two earned runs or less in eight of his last 10 starts. Ryan has established himself as a must-start fantasy option in his first full MLB season, which he will be once again when he faces the scuffling Red Sox at home next week.