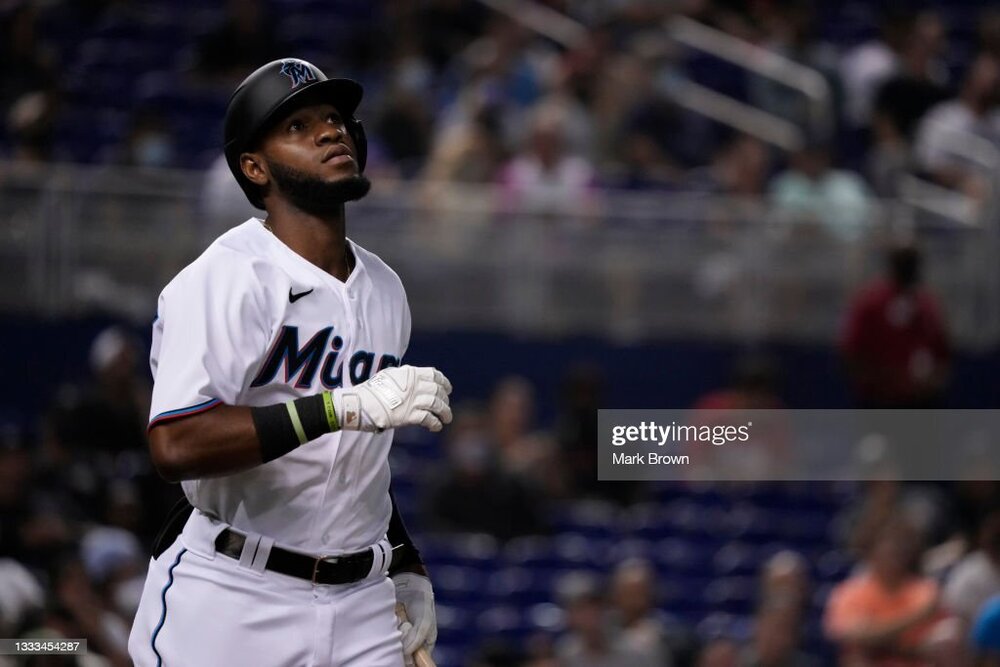 Bryan De La Cruz (OF - MIA) - I'm starting to get intrigued here. De La Cruz was demoted in mid-August after hitting 205/249/332 through his first 90 games with Miami, and the playing time was pretty consistent for June and July, so that shouldn't have been an issue. Instead of sulking, he went down to AAA and hit 320/370/620 in 13 games, and has continued to pound the ball upon his return to the Marlins. He singled, doubled, and homered on Wednesday to extend his hitting streak to 9 games, the last 4 of which are of the multi-hit variety. He came into the game hitting 396/433/755 since his return, the exit velocity is up over 90 mph, and the contact rate has jumped significantly during this hot streak. It's worth wondering just how much of the struggles earlier this year were just poor fortune, as the Statcast expected data has him at .284 and .496 for AVG and SLG respectively, versus the .239 and .407 that he entered Wednesday's game with. The 27% LD rate certainly points to a higher AVG than what he's shown, particularly when combined with an "all-fields" approach, and the EV jump of 1.5 mph could certainly point to a relatively common age-25 power jump. He will likely be a target of mine as an OF5 in 2023.

Miguel Andujar (OF - PIT) - Andujar has finally escaped the Bronx, being claimed on waivers by the Pirates over the weekend and immediately moving into the starting lineup in LF. He's 4-11 with a pair of doubles in the first 3 games with his new club, and he's someone that I will be paying a bit of attention to come spring. Andujar is 27 now and 4 years removed from his brilliant rookie season (.297, 47 2B, 27 HR, 83 R, 92 RBI), but since then he has been plagued by injuries and poor performances at the big league level. At AAA though he has still been producing: his career line at that level is remarkably similar to his 2018 MLB line: 303/351/507 over 145 G with 27 HR and 94 RBI. The warts are there, as they are with just about anyone who is waived: the chase rate is enormous, the exit velo isn't very impressive, and the defense is poor. Still, Andujar can hit a little, and if he's going to play every day he should be able to put up league-average type of offense in 2023.

Oswald Peraza (SS - NYY) - Peraza is a really interesting prospect, because he has shown 5-tool ability at various times in his development, but rarely all at the same time. The Yankees batted him cleanup on Wednesday, but he has shown as little power as any hitter I've seen this year at the major-league level (he had a pair of singles in the contest). Still, the swing does look conducive to power eventually, and he has hit 20 in 107 G at AAA between late 2021 and this season. Conversely, there were some contact issues at times in the minors, but there hasn't been anything of the sort so far with New York, which leads me to believe that he's more concerned with making contact than swinging with authority right now, which is something that young players get into when they're unsure of their role. I hope that the Yanks give him some leash as the starting SS in spring training next year, but that is by no means guaranteed for a franchise that is perpetually competing. It's readily apparent from his minor league time that there is at least a potential 20/20 player here, but the potential variance of outcomes is still almost limitless. I would watch the news out of Yankee camp closely next spring...I'm a bit skeptical that he will have much value early in the year the way that they have been treating the youngsters the past handful of years.

Jesus Luzardo (SP - MIA) - Luzardo was brilliant on Wednesday, shutting out the Mets over 6 innings on just 2 hits before allowing a single and a homer to start the 7th. That's his 3rd straight quality start and 7th in his last 8 outings, and I'm really excited about what we will see from him in 2023. He showed a slight velo bump and better control this season than last, and the ballpark in Miami really suits him (as it does most SPs). The Marlin rotation is going to be phenomenal the next few seasons in all likelihood, and Luzardo should be a big part of it.