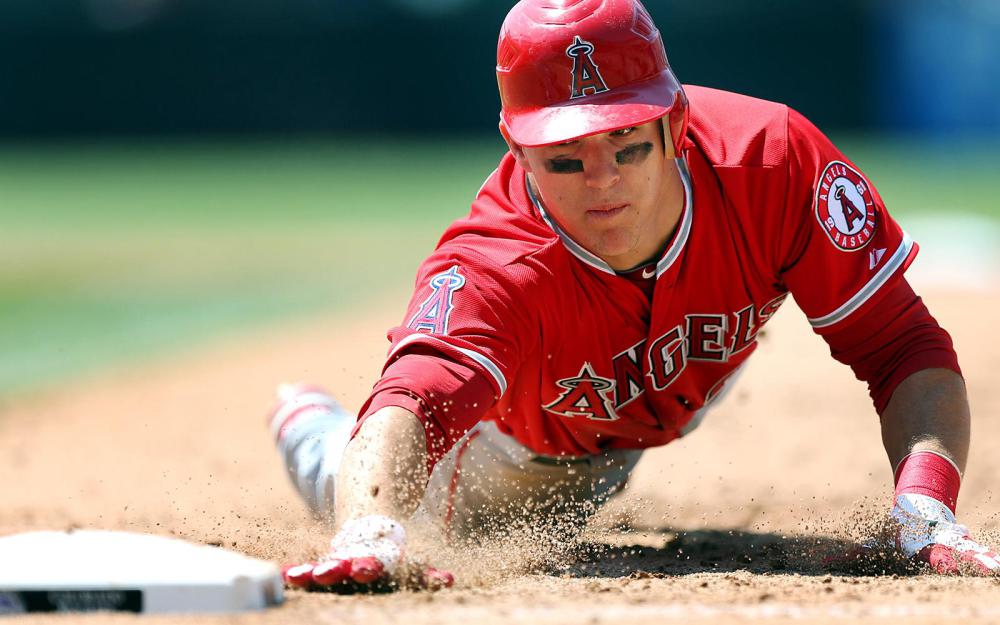 Mike Trout had another amazing day at the plate on Sunday, going 3-for-4 with two doubles, a solo homer, three runs scored, and a walk against the Twins. Trout flexed his power muscles with a trio of extra-base hits, including his 37th bomb of the season in the third inning. That makes nine home runs in 20 games this month for Trout, who's quietly closing in on his third career 40-homer campaign despite playing in just 111 games thus far. The three hits elevated his average to .278, while his .983 OPS is basically in line with his career average. Aside from the injuries, the 31-year-old has shown no signs of slowing down at the plate in recent seasons. The only potential issue is his plate discipline, as his 10.8% walk rate is his lowest since his rookie campaign in 2012. He's still above average in this regard, however, and it can be easily overlooked considering that he's hitting the ball harder than he ever has in the Statcast Era. His 94.5 mph average exit velocity and 59.3% hard-hit rate are both his highest marks of the tracking era, for instance. Trout has a harder time staying on the field these days, but when he does play he's still one of the best hitters in baseball.

Kyle Schwarber went 2-for-3 with two solo homers, three runs, and two walks against the Braves on Sunday. Schwarber did his damage early on against Charlie Morton, swatting a leadoff homer for Philadelphia in the bottom of the first before going deep again in his next at-bat in the third. Sunday marked Schwarber's first multi-homer game since July 6 and sixth of the season, raising his NL-leading total to 42. Only Aaron Judge has gone deep more times this season than Schwarber, who's homered six times in his last 14 games to surpass 40 taters for the first time in his career. Batting leadoff for most of the season has played a big part in that, as his 631 plate appearances are also a personal high. Always a three-true-outcomes type of hitter, Schwarber has become an even more extreme version of that this year with the most homers in the NL, the most strikeouts in baseball (192), 78 walks (also a career-high), and a .214 average that's well below last year's .266 mark. That was on display on Sunday as Shwarber accomplished all three of the true outcomes in all five of his plate appearances, increasing his TTO rate to 49.4%. His OPS is now up to .801 as a result and his 92 runs are also a career-high, although he's still not close to his first 100-RBI season because of how much time he's spent at the top of the batting order.

Cristian Javier settled for a no-decision on Sunday despite tossing six shutout innings against the Orioles, allowing just one hit and no walks while striking out eight. Javier was masterful in one of his best starts of the season, throwing 59 of his 76 pitches for strikes and limiting Baltimore to just one measly single. The 25-year-old righty has been nothing short of sensational over his last three outings, yielding just four hits while racking up 22 strikeouts over 17 scoreless innings. The hot streak has lowered Javier's ERA to 2.65 and his WHIP to 0.96 while improving his strikeout rate to 11.8 K/9 -- all personal bests. Javier has a ridiculous 0.40 ERA across four September starts with 30 strikeouts in 22 1/3 innings, coming up big for his fantasy managers during the playoffs. With an improved 3.2 BB/9 rate and career-best 1.1 HR/9 rate as well, Javier's improved peripherals explain his elevated performance this year and bode well for his 2023 outlook. He'll look to close out the regular season on a high note against the Rays at home next weekend.

Ross Stripling picked up the win on Sunday after holding the Rays to just one run on six hits and no walks with three strikeouts over five innings. Stripling enjoyed plenty of run support in Toronto's 7-1 victory as he outdueled Shane McClanahan, improving to 9-4 with a 3.16 ERA. Stripling has now won all three of his decisions in September, going 3-0 with a 3.95 ERA. The Blue Jays have won all five of his starts this month and are 22-9 in his appearances this year. He's also been extremely consistent, allowing three earned runs or less in 21 of his 23 starts this year, including 17 of his last 18. His incredible command has played a large role in that based on his 79:12 K/BB ratio in 96 1/3 innings during that span with just nine home runs allowed. Stripling has emerged as a reliable starter for Toronto this year after struggling last year (5-7, 4.80) by cutting his walk and home run rates in half from last year to the best levels of his career, thereby greatly limiting his mistakes. His 23 starts, nine wins, and 128 1/3 innings are all personal bests as well, making his improvements even more legitimate. The former All-Star is nearly 33, however, so it's probably wise to expect some regression next year. He lines up to face the Red Sox at home in his final start of the season next weekend.

Steven Kwan was the hero on Sunday, helping the Guardians clinch the AL Central title by going 3-for-5 with a homer, five RBIs, two runs, and two stolen bases against the Rangers. Kwan was the driving force behind Cleveland's 10-4 victory, putting the game out of reach with his eighth-inning grand slam. While the long ball was only his sixth of the season, half of those have come in September as he's caught fire towards the end of the season. The Guardians' leadoff man is batting an absurd .442 over his last nine games with 12 runs, 10 RBIs, and four steals, providing a major boost to fantasy managers down the stretch. With his average up to .298, he's a serious threat to reach .300 by season's end. He's also only one stolen base away from 20, although he'll likely get some well-deserved rest days now that Cleveland's playoff berth is locked up. If you picked Kwan up at the beginning of the year because of his early-season hot streak, he's proven to be a legit fantasy outfielder in his first MLB season. He's even shown remarkable plate discipline with more walks (60) than strikeouts (54), which suggests his sucess this year may be repeatable.