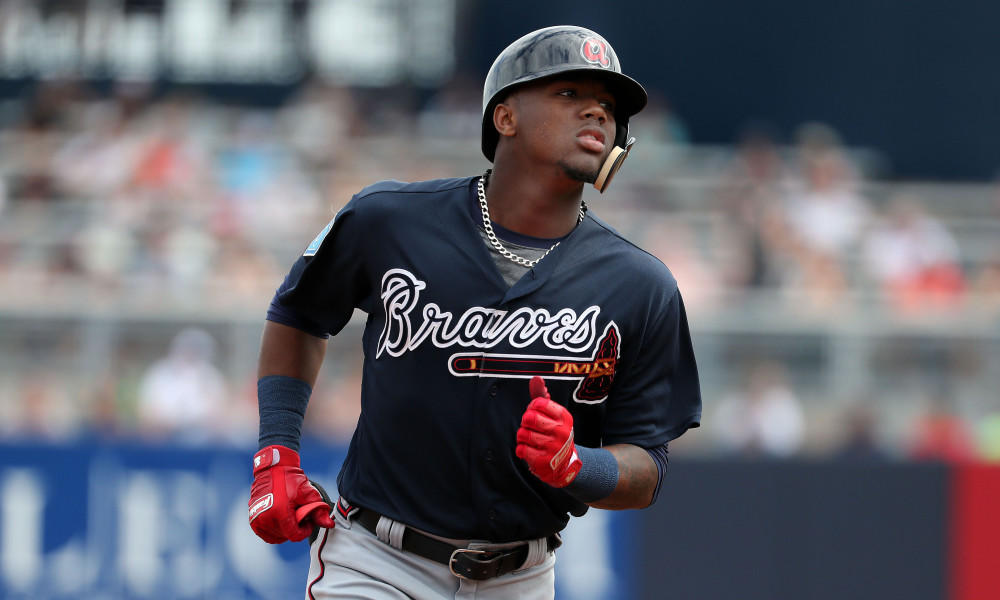 Ronald Acuna Jr. carried the Braves to victory on Saturday, going 2-for-4 with a double, a homer, and four RBIs against the Phillies. Acuna plated all four of Atlanta's runs in its 4-3 win over Philadelphia. The leadoff man started with a two-run double in the bottom of the third, then followed it up with a two-run shot during the very next inning. That makes back-to-back games with big flies for Acuna, who's struggled to rediscover his power stroke this year in his first season back from an ACL tear. He's been hitting the ball on the ground nearly half the time (48.4%), which has come at the expense of line drives and fly balls. Not surprisingly, his .775 OPS is down over 100 points from his career .891 mark and more than 200 points below his 2020-21 average (.989). The speed has returned, at least (28 steals), although Acuna has to be more careful as his 10 caught stealings lead the NL. Overall, it's still been a good season for the 24-year-old, just not up to his MVP standards. The hope is that he'll return to being a force next year after a full, injury-free offseason to train and prepare for 2023.

Daniel Bard pitched a scoreless ninth inning against the Cubs on Saturday, allowing one hit and no walks with one strikeout. Bard threw 13 of his 18 pitches for strikes en route to his 31st save, which means he's saved nearly half of Colorado's 63 wins. The scoreless inning also dropped his ERA below two to 1.99, extending his streak of innings without an earned run to nine. The 37-year-old Rockies closer is having his best season in over a decade, since he was a young flamethrowing setup man for Jonathan Papelbon and the Boston Red Sox. The 1.99 ERA is just a few ticks off his personal best, while the 31 saves have equaled his career total coming into the season. That said, Bard is likely headed for some regression next year. Not just because of his age, but because his peripherals have been more good than great this year. He's benefitted from plenty of good fortune based on his .214 BABIP, 79.9% strand rate, and 7.3 HR/FB&, all of which are much better than his career averages. Furthermore, his 1.03 WHIP, 9.8 K/9, and 4.0 BB/9 rate are nothing special for a closer, although his 97.9 mph average fastball velocity is still impressive. Draft Bard for the saves, but expect his ERA to be at least a run higher next year.

Jose Berrios picked up the win on Saturday after holding the Orioles to two runs on seven hits and two walks with three strikeouts over six innings. The Blue Jays spotted Berrios a quick 3-0 lead after two innings and he was able to take it from there, logging his third straight quality start en route to his 11th win of the season. That makes five quality starts in his last six outings for Berrios, who now has his ERA back under five (4.99) for the first time since early August. It's been a bumpy season for Berrios, who entered play on Saturday with the most earned runs (86) and home runs (28) allowed in the Amerian League. At least he's finishing the regular season on a high note, however, and getting back on track in time for the playoffs. His plummeting strikeout rate (7.7 K/9) remains a concern, however, especially since his fastball velocity has held steady around 94 mph. He'll try to keep rolling in Tampa Bay during his next start.

Lane Thomas stayed hot at the plate by going 1-for-3 with a solo homer and a walk against the Marlins on Saturday. Thomas smashed a leadoff homer off Trevor Rogers in the bottom of the first to get Washington started, sparking the Nats to a 5-3 victory. The long ball was his 16th of the season, which means he still has an outside shot at his first 20-homer season despite going homerless in April. The Nationals' leadoff man has been absolutely on fire since the calendar flipped to September, hitting safely in 13 of 15 games this month and batting .323 with eight extra-base hits. The surge has pushed his OPS safely over .700 (.731) while bringing his average up to a respectable .252. His counting numbers are pretty weak for a leadoff hitter, however, and his plate discipline has taken a significant step back this year, as his walk rate has cratered from 14.0% to 6.7%. He's not hitting the ball as hard either, with his average exit velocity falling from 91.0 mph to 86.4 mph year-over-year. Thomas is still a decent fourth or fifth fantasy outfielder, but his first full season hasn't been anything to write home about.

Chris Bassitt notched his career-best 14th win of the season on Saturday after firing six shutout innings against the Pirates, yielding just three hits and two walks while fanning eight. Saturday was a nice bounce-back performance for Bassitt, who got blown up for five runs in 3 2/3 innings his last time out. That start was a clear anomaly, however, as Bassitt has only had three starts shorter than five innings all season long. He's now gone at least six frames in 22 of his 28 outings, 18 of which have been quality starts. The six scoreless frames lowered his ERA to 3.32, which is just a few ticks higher than last season's 3.15 mark. They also upped his innings total to a career-high 171, while the eight punchouts set a new personal best at 163. Bassitt has proven to be a huge offseason addition for the Mets and is one of the main reasons why they're still in first place despite injuries to Jacob deGrom, Max Scherzer, and others. Bassitt has another cupcake matchup on deck against the Oakland A's, where he'll be a must-start against one of the worst offenses in baseball.