Hi Folks, This morning we take a swing at the top tier catchers in this year's fantasy draft.  Since there is a finite number of positions that must be filled in most fantasy baseball leagues, catchers are and have always been a position that is paramount to the concept of Position Scarcity. In leagues that mandate 2 catchers as part of the starting lineup, 20 homeruns from a catcher is shockingly equivalent with 46 HRs from a first baseman (well not exactly, please read on). Some call this type of valuation Value Based Drafting, we call it VAM (Value Above Mean). The average catchers' production is approximately 35% less (assuming 200 drafted batters) than that of the average fantasy batter, and those that exceed their peers at this light hitting position need to be valued accordingly. However there is a fly in the ointment, catchers are also a position that historically suffers from the lack of predictability.

Rodriguez,I. Still has fantasy value, although his SLG % is on a very steady decline. Rumors about his affiliation in the Rangers Roidhouse abound.
Posada,J. Coming off shoulder surgery, playing time risk moves Jorge out of top 10.
Molina,B. Inflated RBI% of 17.3 makes him a risk to repeat.
Pierzynski,A. At 32 gap power is starting to wane, over rated almost every year according to ADP.
Hernandez,R. Showed signs of life with 8/36/.277 2nd Half.
Martinez,V. Bounceback season projected, Martinez is an extra base hit machine.
Bard,J. Playing time could be an issue with Varitek back on board. When healthy, Bard can MASH the ball
Mauer,J. Solid gap hitter, not a HR guy, but BA and Runs scored are a big bonus at the C slot
Navarro,D. Low K% (.12) give him a solid EYE, however overstated Singles % shave 10-15 points from '09 BA
Snyder,C. K% rose above 30% when pressed for RBI production. Broke a testicle last year (what? ouch!)
Shoppach,K. Huge 2nd Half of '08 16 HRs. But poor EYE (.27) and high K% (39% in 2nd H) will reduce production
Doumit,R. Pure hitter, slugged at over 500 in 400+ ABs last year. Solid .70 FPI and 15.2 RBI%
McCann,B. Slugged at over 500 in both 1st and second half. Unlucky Singles %, should post over .300 BA
Martin,R. 20% 2nd half decline took toll on overall numbers, great EYE (1.0), will string it together this year.
Soto,G. Slugged over .500 throughout the season. Lot of upside, but high K% (.24) imposes risk of the Sophomore jinx
Napoli,M. Napoli should see 400 ABs in a lineup looking to make up for O production. 586 SLug in '08
Iannetta,C. Strong 2nd Half 11 HR/38 RBI/490 SLG, Coming of Age at 25. Breakout coming.
Saltalamacchia,J. Once a top hitting prospect, Jason Kendall type offense in '08. Only 23, but has been outmatched
Suzuki,K. Sees a lot of playing time, and the offense has improved around him.
Towles,J. .137 BA in '08! K'ed in 38% of 2nd Half. Lots of power, but needs new approach in the big show
Baker,J. Posted an inflated .299 BA in the 2nd H of '08. Singles % was overstated by about 20-25 points.
Wieters,M. The total offensive package. Scouts see Mike Piazza potential...is he ready? Looked overmatched last spring, we'll be watching him in March.

See our VAM strategy in action using our Mock Draft Software module. Watch your team strategically move up the rankings on the Draft Summary page as the Mock Draft progresses. 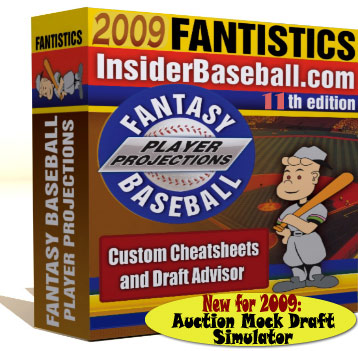 Overview of the 2009 Fantasy Package