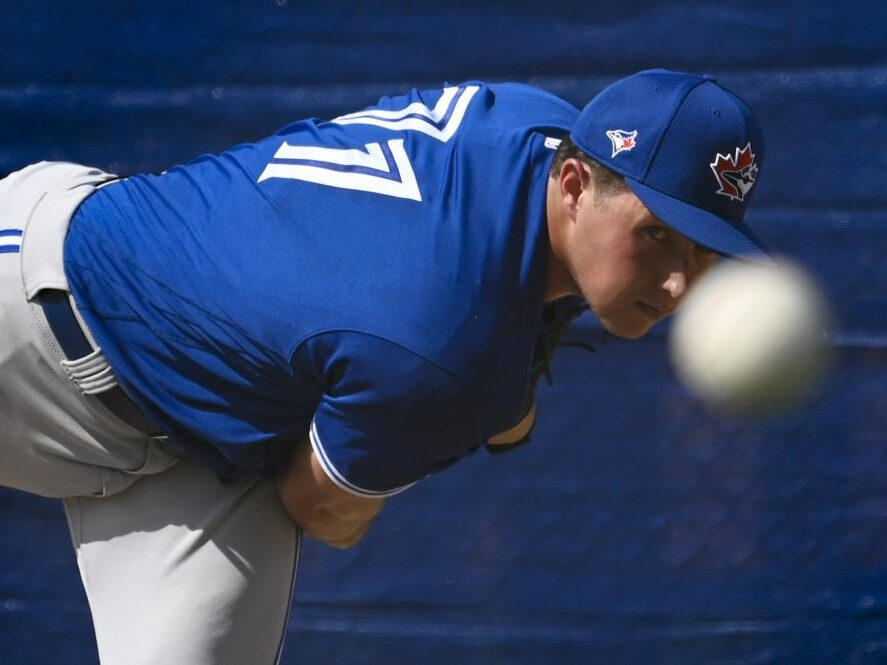 Zach Plesac (SP-CLE) - Plesac has beaten out Adam Plutko for the final spot in the Cleveland rotation. From a fantasy perspective, it's tough to get too excited about the 25-year-old, who debuted last season with a decent 3.81 ERA, but that came with a bloated 4.91 FIP due in large part to a mediocre 18.5% K% and so-so 8.4% BB%. He also allowed nearly 1.5 HR per nine, and was never really considered a top prospect. Other concerns include a 39.1% GB%, and 7.6% barrel%. So basically, he induced a lot of contact, much of the contact was bad, and he may have been a bit lucky with a .258 BABIP. I'd avoid him outside of AL-only formats.

Michael King (SP-NYY) - It will be King and not top prospect Clarke Schmidt filling in for Masahiro Tanaka (concussion). Maybe he sneaks in a win or two, though is King really going to be ready to go the required five innings right away? Last year in a handful of minor league stops, King put up a 5.48 ERA and allowed 47 hits in 46 innings, numbers that don't bode well for early success. His 2019 was limited due to elbow concerns, so though that doesn't paint a pretty picture, looking at his 2016-2018 numbers makes him at least interesting: 2.59 ERA, 1.04 WHIP, and a 278:59 K:BB in 341 innings.

Bubba Starling (OF-KC) - With the trade for Franchy Cordero, there doesn't appear to be much of a path to playing time for the former top draft pick, but the 27-year-old is at least attempting to make things interesting. Before spring training was suspended, he had been hitting a monster .367/.441/.767 with three homers and three steals in 30 at-bats. Starling then homered again on Monday, so at this rate, perhaps the Royals reconsider and give him more playing time at the expense of guys like Brett Phillips, Alex Gordon, and perhaps even Hunter Dozier who is hitting just .172.

Nick Senzel (OF-CIN) - It's too early to call Senzel a bust, but what can we realistically expect this year? He's already 25 and coming off a so-so .256/.315/.427 slash in 104 games last year. He's often hurt, and this spring/summer, he's 1-for-13. I have Senzel atop the CF depth chart, but if he's not hitting early, the Reds are looking to compete this year and could look either to the trade market or to guys like Phillip Ervin and Josh VanMeter.

Ryan McBroom (1B-KC) - I get the honor of the first player note on McBroom, and it's long overdue. McBroom looks to be the top option at first base, at least for now, with Ryan O'Hearn still recovering from COVID-19. This isn't exactly a Wally Pipp / Lou Gehrig situation, but McBroom has a chance to grab the first base job for at least this season. All he did last year at Triple-A was hit .315/.402/.574 with 26 homers in 117 games. McBroom then held his own at the big-league level, batting .293/.361/.360. He's already 28, so there's not a lot of long-term value, but considering O'Hearn hit just .195/.281/.369 for the Royals last year, the opportunity is very much there.

Yoenis Cespedes (DH-NYM) - Not a huge surprise, but Cespedes was named the team's Opening Day DH. He still doesn't sound 100%, as team staff have recommended he run at just 80% effort. That also makes it unlikely he'll be playing the field any time soon, so when guys like Robinson Cano need a break from the field, Cespedes may find himself on the bench. It's right to be wary of a guy who has played in just 38 games since the 2017 season, but who knows, maybe he can tap back into that 35 HR type of power.

Luis Urias (2B-MIL) - Urias has been sent to the team's alternate training site and will not make the Opening Day roster after testing positive for COVID-19. He shouldn't need too long to get back, but what is he coming back to? Keston Hiura is the team's second baseman of the present and future while the Brewers are set to roll with Orlando Arcia at short. The Brewers also have Brock Holt fighting for playing time, so I wouldn't be expecting much from Urias this year. Urias hit just .223/.329/.326 in 71 games for the Padres last year after compiling a .305/.403/.511 slash over 196 Triple-A games since 2016. Urias turned just 23 last month, so don't write him off just yet, but he's probably more of a 2021 / 2022 guy for fantasy purposes. I did note that Urias hit .300/.371/.425 last September, but unless Arcia gets off to a poor start (very possible), Urias' 2020 value will be very limited.

Josh Reddick (OF-HOU) - Reddick was 0-for-3 with a walk on Tuesday, leaving him just 2-for-26 in Summer Camp play. Reddick is still expect to open the year as the starting right fielder, but with Kyle Tucker hitting .303/.333/.485, that could change in short order should Reddick get off to a hot start. Complicating Tucker's path to playing time is the reputation of new manager Dusty Baker, who has long been known to play veterans. Perhaps he's changed or perhaps Astros' management will have more of a say in who takes the field, but either way, Reddick had best pick things up soon.

A.J. Puk (SP-OAK) - In a tough blow for the top prospect, Puk received a cortisone shot in his pitching shoulder on Tuesday and will be sidelined a minimum of two weeks. Puk had been expected to be in the team's rotation from the get-go, but now that slot will go to Daniel Mengden. Puk could potentially be held back until September should the A's exercise an abundance of caution with a key piece of their future. Mengden showed some promise in 2017-2018 with a 3.80 ERA in 158.2 innings, but his lack of swing-and-miss stuff caught up with him last year when he managed just a 4.83 ERA and 1.44 WHIP in 59.2 innings.

Nate Pearson (SP-TOR) - Pump the brakes. Pearson has been the talk of camp this year, entering Tuesday's start having allowed just one run in seven innings with 11 strikeouts while hitting 100 mph on occasion. Then Tuesday happened and the Blue Jays may now have their excuse to manipulate Pearson's service time. Pearson allowed four runs in the first inning against Boston, with a Mitch Moreland three-run homer being the big blow. Pearson actually seemed to gain velocity as the game went on, hitting 98+ in the fourth and final inning of his outing, ultimately striking out the last three batters he faced. This shouldn't prevent Pearson from making his MLB debut in 2020, though he's probably not making that debut until August. He finished having allowed those four runs in 3.2 innings

With the unexpected news that Gavin Lux will not be on the Opening Day roster, things are a bit up in the air regarding the Dodgers' second base slot. Lux shouldn't need too long to work into game shape after reporting late (COVID?), but he hasn't looked good at the plate in limited action. Chris Taylor would seem to be the top choice, as he's 8-for-20 with three home runs, but Kike Hernandez should see time there as well, and we could see some Max Muncy at second when the Dodgers want to get Edwin Rios' bat into the lineup, a guy who has impressed as well. In theory, Lux SHOULD return in a couple weeks and show the upside that has made him a top-10 overall prospect, but in a short season, all bets are off for a team looking to win now.

With the David Price opting out news, that opens up the fifth spot and just this week, that was confirmed to be Ross Stripling. Dustin May had been under consideration as well, but he'll also make the team and work in long relief and perhaps be a spot-starter on occasion. Stripling has yet to throw more than 122 innings in a season, but he won't have to this year. His 91 mph fastball limits his ceiling, but in 387 big league innings, Stripling has a solid 3.51 ERA, 1.20 WHIP, 8.8 K/9, and 2.1 BB/9. In many other rotation, he'd be entrenched as a No. 3 or 4 starter, but in LA, he'll be looking over his shoulder yet again this year, with May, Tony Gonsolin, and Josiah Gray looking to make their marks.

Tony Watson and Tyler Rogers are the names to watch here, and though the Giants should be bad this year, closers on bad teams still have fantasy value. Manager Gabe Kapler last week stated that Rogers would fill a "flexible" role, which is frustratingly vague, but it could mean that he closes some games when the matchups are favorable (i.e. a bunch of RH hitters), but pitches in the seventh and eighth innings of other games. If anything, Rogers is interesting to watch. A true submariner, he averaged just 82.4 mph with his fastball, yet in 2019 managed to post a 1.02 ERA in 17 appearances. It is unlikely he can sustain anything close to that, but I say he leads the team in saves. Watson is a veteran in the last year of his contract, making him a prime trade candidate.

It's a dumpster fire. Johnny Cueto will be the Opening Day starter after his 5.06 ERA in four starts return last year and despite allowing nine runs on 13 hits in 6.1 innings in exhibition action. Jeff Samardzija should get traded at some point if he gets off to a decent start, while the other starters include Kevin Gausman, Drew Smyly, perhaps Logan Webb, or other inspiring candidates like Trevor Cahill and Andrew Suarez. Wonder what Matt Cain and Tim Lincecum are up to these days? Gausman is at least mildly interesting, though he belongs in the bullpen after thriving there with the Reds last year (14 IP, 20:3 K:BB). It's best to avoid all of these guys to be honest.

Right now, first base is expected to be Daniel Murphy, and the lefty may hit regular against southpaws as well after posting a .881 OPS against them last year. We'd expect some Murphy at DH on occasion with Ryan McMahon sliding over to first. So who shares time at DH? Tuesday's lineup actually had Raimel Tapia at DH and Hilliard in left, but the Rockies will likely remain flexible early on and see who steps up. We'll see some Kemp at DH as the Rockies try and see if he has anything left. We'll see Garrett Hampson and Brendan Rodgers at second base, pushing McMahon to first and Murphy to DH. Look for this to be fluid early and often.

This is set to be Raimel Tapia over Sam Hilliard with Ian Desmond having opted out due to health concerns. Tapia has outplayed Hilliard, batting .355/.394/.613 with a pair of home runs in his first 31 at-bats, while Hilliard has hit just .176. Tapia hit a so-so .275/.309/.415 in 447 PA for the Rockies last year, with fairly typical Coors home/road splits - .844 OPS at home, .604 on the road. The Rockies could use Matt Kemp (can he still field?) or Garrett Hampson in left against lefties on occasion, but this should pretty much be Tapia's job as long as he can hit and hold off Hilliard.