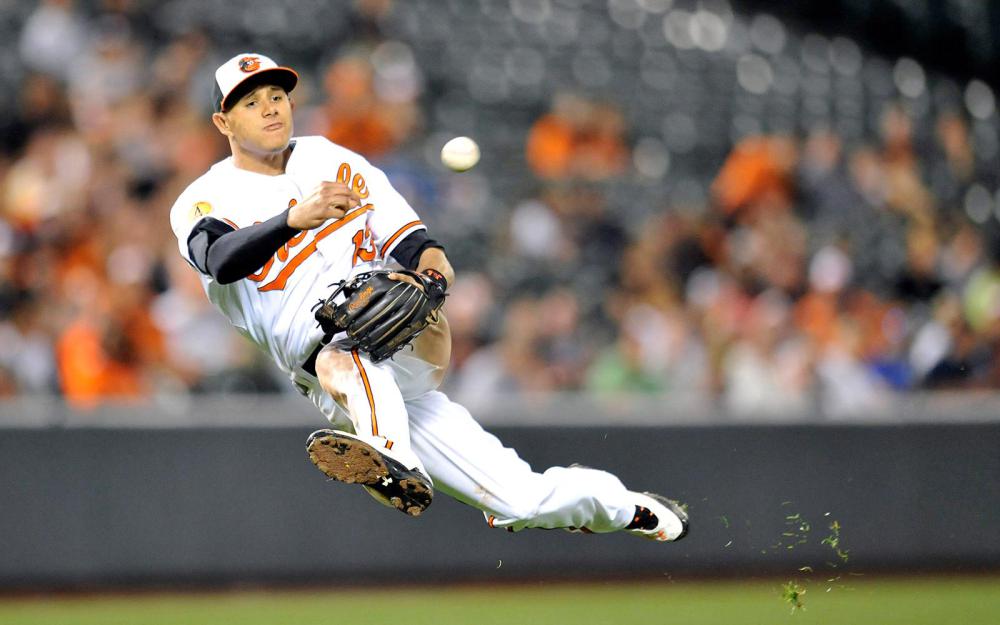 The Orioles have had immensely talented young players shift between 3B and SS before (some guy named Ripken comes to mind.) Ripken made the switch at 22 and in the middle of the season. Manny Machado is making it three years older and at the start of the year. Enough of the history lesson. In 2017 Machado hit 33 homers, his 3rd straight year over 30. If he had been at SS that would have tied him for the major league lead at that position with Francisco Lindor. The next highest total mws Didi Gregorius' 25. As a 3B, he was 4th in the majors. Machado had a down year for average, with a .259 mark driven by a .265 BABIP and saw his GB% rise to 42.1% from 37.3% in 2016. He is likely to bounce back, as his FB% was basically the same and his Hard% went up from 34.5% to 39.5%. Less bad luck will help Machado. His walks also ticked up last season while his Ks trended down, both good signs. Add all this up and Machado's fantasy value rises for 2018 with a move from the hot corner.

Baltimore signed Andrew Cashner after he posted a career high 11 wins and posted a 3.40 ERA for Texas in 2017. That about sums up the good news from last season for him. Cashner's K/9 plunged from 7.64 in 2016 to 4.64 last year. His ERA was bolstered by some very good luck at home, where his ERA was 2.72 but his FIP 5.21. On the road his FIP of 4.07 and ERA of 4.01 were very close and not overly impressive. Cashner gave up twice as many homers at home than on the road and is moving to Camden Yards which had a higher HR factor last year than Globe Life Park. The Orioles signed Cashner to a 2-year deal with a guaranteed $16 million coming to him, so he is going to be in their rotation. His effectiveness there is very much in doubt. The Rangers, who are in desperate need of starting pitching, knew him the best and did not make a qualifying offer. They made some effort to sign him but weren't willing to do what the Orioles were. That tells you something.

The Brewers surprised in 2017 with the lowest payroll in the majors on Opening Day. This has seemingly sped up the timetable for their rebuild. They made a splash in the free agent market by signing Lorenzo Cain and pulled off a major deal with the Marlins to acquire Christian Yelich. This gives Milwaukee a surplus of outfielders and leaves a couple of their starters from last year pushed down the depth chart.

Domingo Santana slugged 30 homers in his first full major league season. He posted a solid .371 OBP and increased his Batting EYE t0 0.41 from 0.35 in limited work the year before. Santana did not have pronounced differences when facing pitchers from different sides, owning a .286/.389/.504 slash line against lefties and .276/.364/.505 against righthanders. Although he hits homers at a higher rate in Miller Park, he posted a slugging percentage two points lower than the .506 he had on the road. This is due to his much higher .305 average (.250 at home) and 18 doubles (as opposed to 12 at home.) Santana doesn't provide much value, fantasy or real life, sitting on the bench behind Christian Yelich. His power numbers are too big to ignore, though. The Brewers lost on in the Yu Darvish sweepstakes and are still looking for another starter. With some defensive shortcomings, Santana looks like a prime DH prospect. At age 25 Santana could be part of a deal with an AL team. If that happens he will have solid value to a fantasy team also.

Keon Broxton broke out in 2017, posting a 20/20 season in CF in 143 games in CF. His reward in 2018 is to find himself behind Lorenzo Cain on the bench. Behind Broxton's counting numbers, though, are reasons why getting Cain made sense. Broxton will turn 28 in May, so his big jump came in his age 27 season. That may be the best he'll be able to get. He also only hit .220 and walked at an 8.6% clip. That combination yielded a .299 OBP. It wasn't good enough to put him atop the lineup, where his speed could have been more of an asset. Instead, he found himself most often in the 6th position or lower. Broxton's stealing prowess, on a pro rated basis, actually dropped considerably between 2016 and 2017. In 244 PAs in 2016 he swiped 23 bases, but only 21 in 463 PAs last year. Broxton doesn't have the same appeal as someone like Domingo Santana as far as trades are concerned. Barring injuries to a Milwaukee starter he is likely to stay in a role as a 4th or 5th outfielder.

The Rangers had a lot of question marks in the offseason with regards to their rotation. After Cole Hamels and Martin Perez there was a whole lot of "TBD." GM Jon Daniels has opted to fill those spots from a position of quantity and quite likely is not done finding candidates.

One pitcher who looks like he has secured a spot in the Texas rotation is Doug Fister. He was signed in November after pitching for the Red Sox in 2017 after not signing until May. The 34-year-old Fister has not posted a sub-4.00 ERA since 2014. However, his FIP last year was just under that mark at 3.98. Fister's K/9 leaped to 8.27, and was better in Fenway Park than on the road. After bottoming out at 41.2% in 2016, Fister's percentage of pitches in the strike zone inched back up to 43.8% last year. His swinging strike percentage jumped to 7.6%, the third best of his career. Fister is playing for his 4th team in 4 years and is guaranteed only for 2018 with the Rangers (there is a team option.) While Fister may be slotted as third in the Rangers' rotation right now, there are too many questions about whether he can continue to regain his form to recommend him as a pick in most fantasy formats.

Matt Moore came to the Rangers in the offseason from the Giants. $750K in international signing money also came with him, which might have been the most important part of the deal, as the Rangers are often looking overseas for talent. Texas picked up Moore's $9 million salary for 2018, so he will likely be given one of the rotation spots unless another candidate pushes strong. Moore has been able to record strikeouts during most of his career, but after seeing his K/9 jump back to 8.08 in 2016 after a couple of injury plagued seasons it dropped slightly to 7.64 in 2017. He has never recorded an FIP below 3.93, except for his first taste of the majors, a 3-game stint with Tampa Bay in 2011. It looks like he will end up as part of a back end of the Texas rotation that will be nothing to write home about.

The Rest of the Majors

RP Tony Watson has reportedly signed with the Giants. It is a multiyear deal. He saved 10 games for the Pirates last year before being traded to the Dodgers. With Mark Melancon recovering from surgery, Watson could be in a closer mix.

It was only one down year after 4 very solid ones, but it may be the end for P John Lackey. According to his friend and former teammate Jon Lester, his impression is that Lackey is going to retire. Lackey's ERA and FIP were above 4.00 for the first time since 2011. His K/9 dropped from 8.60 in 2016 to 7.86 last year. Still, that was his best mark since 2005. Lackey's main problem last year was the long ball. He gave up a career high 36 home runs, which was only the second time he had allowed over 30 (the first time was his first full major league season in 2003.) It would seem like Lackey would have something left to give if he wanted to but from Lester's comments Lackey may just feel it's time to hang it up.

OF Gerardo Parra had surgery a week ago Friday to remove the hook of the hamate bone in his right hand. This was relatively minor surgery and he is expected to be available for Cactus League games in early-mid March.

OF Rajai Davis is reportedly close to signing a minor league deal with the Indians. He stole 43 bases for Cleveland in 2016 before splitting 2017 with the A's and Red Sox. Davis swiped 29 bases in 117 games last year, so even if he ends up as a part time player he could add to the steals column.

P Travis Wood will have a pin removed from his right index finger soon. He sliced the finger open in a crossbow accident last month. The southpaw is fighting for a rotation spot with the Tigers as a non-roster invitee and has been throwing but not catching yet.

RP Shane Greene has been declared the Tigers' closer. The incumbent got the official vote of confidence from manager Ron Gardenhire.

P Jason Vargas has signed a 2-year deal with the Mets, pending a physical. Vargas won 18 games for the Royals last year after missing much of the previous 2 seasons to Tommy John surgery.

RP Daniel Hudson did not throw a scheduled bullpen session Friday due to a sprained ankle. It isn't expected to jeopardize his status of one of the few relievers not competing for a spot in the fluid Pittsburgh bullpen.

RP Fernando Abad signed a minor league deal with the Phillies with an invite to spring training. Abad has an opt out if he isn't added to the major league roster by March 22. He pitched 43.2 IP for the Red Sox last year, primarily in a LOOGY role.