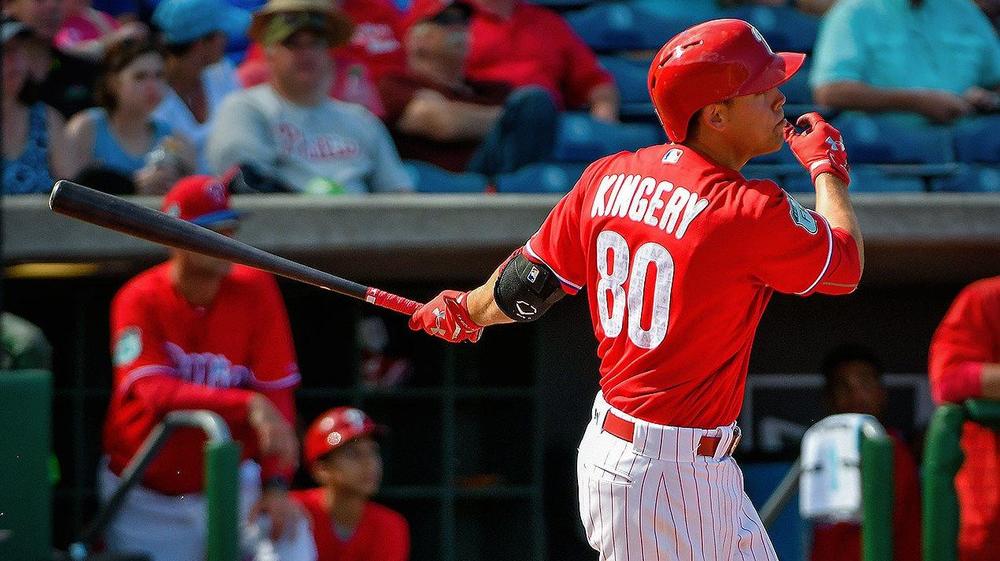 Seemingly with every trip to the plate, the Padres youngster is bringing in more attention and interest. Excitement is in the air ... Not just for Tatis, Jr. ... Not just for San Diego ... Yes fantasy players are starting to get amped, as well. In just the past week, Tatis, Jr. has seen his ADP surge to #626 over the course of 20+ NFBC drafts and he's also hit his high-water mark in a single draft, going as early as #383 in one get-together.

It is at this point that I remind you of the reality of the situation. San Diego may have just added Eric Hosmer to the payroll, but 2018 is not seen as a year to contend. Instead, it's a year to build and grow. The Padres should lose close to 90 games. They will still be going into July with the goal of flipping vets for prospects. A guy like Tatis is a centerpiece ... for 2020.

Crazy things can, of course, happen. Injuries, trades, a shocking run of victories, fan/media uproar, etc. ... it can all force a team's hand. But, even if the Padres' brass were to give Tatis, Jr., a shot this summer, it likely comes in September and not July. They would rather bring in an MLB retread to cover the year than promote a youngster into a losing atmosphere. In other words, no matter how good the kid is (and, believe me, the only negative blurb in any scouting report mentions that he'll probably have to move from SS to 3B and will likely not become a perennial .300-hitter), he's not in the plans for the Padres and he shouldn't be in your plans for 2018, either. Re-drafters could stash a guy - and all his zero's - for five months. That's just a losing move.

Tatis, Jr., is not every prospect, though. He's just the one garnering a load of attention as we sit a few weeks out from the start of the regular season. How about the other youngsters? The guys who are much more on the doorstep of the 25-man roster? Those are the players I'll discuss this week ... where they are being drafted, their chances of being on the Opening Day roster, and what their true fantasy value is for 2018.

Acuna has been on fantasy radars the entire offseason. A year ago he was mostly an unknown, but after beating up multiple levels in the minor leagues, he's now entrenched as the 'Best Prospect in Baseball.' He has a skill set that appears ready ... power, speed, bat-to-ball, instincts. He's a rare commodity. But, the rules of the Collective Bargaining Agreement apply to everyone. In effect, this is a money decision that the Braves will have to make. Do they let him play from the get-go and give up a year of future control (doubtful)? Do they go the Kris Bryant route and call him up in mid-to-late April in order to keep him from 'Super 2' status (probable)? Or, do they hold off on him until mid-to-late June in order to secure a full, extra year of contract control (less than 50/50, in my opinion)?

The Braves have a certain need in LF. Acuna has looked more-than-fine this spring (10 hits in 23 ABs). The Braves really do need his bat in the middle of the lineup ... seriously, Tyler Flowers is your clean-up hitter?!? Acuna is a rare talent and I am not too negative on his current cost. The risk is not extreme when taking him at the end of the 9th round. Drafts are a risk-and-reward proposition and in Acuna's case the reward outweighs the risk by a good deal. Take the plunge with the understanding that you cannot count on him to be in your starting lineup until May. As long as you cover yourself with an extra OF on draft day, you should be fine to make the Acuna selection.

Robles is not too far behind Acuna on most ranking lists. Unlike Acuna, though, he doesn't have an immediate path to a starting gig. The competing Nationals have all three of their OF spots locked up ... for now.

There is growing concern about Adam Eaton's (ADP #149, 104/193) Opening Day availability. He has done almost nothing in Spring Training. Robles draft day value is now being driven by the news coming out of Nats' camp. As long as Eaton (knee) continues to sit and heal, Robles will continue to slowly climb draft boards.

Robles is still developing his true power and hit tool. He does have exceptional speed and base-running ability, though. With an everyday job his top boost for a fantasy team would be in the SB category. And that is worth paying for. I'm not expecting a great AVG/HR/RBI game, but if you're thinking Starling Marte-lite (ADP #48, 29/86), Robles can be your man in 2018.

Kingery is doing everything in his power to force his way onto the Phillies' roster. Not only has he hit this spring (7-for-18 with three HRs), but he's also been working out all over the infield. The natural second-baseman has handled fielding duties at both shortstop and third base in workouts. In other words, the current starters at those spots (Cesar Hernandez, J.P. Crawford, and Maikel Franco) have all been put on notice. If they struggle Kingery is ready.

Kingery is overly intriguing. He took a big leap last year in the power department by hitting a surprising 26 minor-league homers. He still kept his theft-ability (29 SBs) and also kept his average on the plus-side with a .304 mark. At 23 years of age he is ready to go. Kingery's current ADP near-320 is a little low for me. I think he should be drafted in all 12-team mixers. Depending on how the rest of his March goes, you might still be able to snag him as a reserve round selection. And I would still suggest you find a spot for him even if Philadelphia heads north without him on the MLB roster. He'll be up soon.

Manager Dave Roberts surprised many by noting that he could see Buehler finishing with somewhere between 140-150 innings this year. That immediately makes him relevant. He's the owner of a big-time fastball and perhaps an even more big-time curve.

The Dodgers showed us in 2017 that they would shuffle the rotation deck at will. They made very liberal use of the new 10-day DL and often it seemed they were just 'skipping a start' instead of giving an injury a chance to heal. Expect that to continue this year. With that in mind, Buehler probably sees 20 starts this year. You can mostly count him as the swingman for LA. When everyone is healthy, Buehler will work out of the 'pen. When 'injury' arises, he'll jump in.

As long as everyone makes it out of March in full-health Buehler is likely ticketed for Oklahoma City. But, you should expect him to be making his first MLB appearance this season by the time April changes to May. He may experience some 'Shuttle Syndrome' between the bigs and OKC, but overall, I feel good about Buehler hitting the 120 inning mark. He's a fine reserve round grab.

While his fellow rookie infielder teammate, Gleybar Torres (ADP #274, 96/406), scuffles in the spring (2-for-16), Andujar has forced his way into the 3B conversation. He's been stinging the baseball from Day One with six of his eight hits going for extra bases. His bat looks set to roll. His mitt is another matter. Defense just is not his calling card. Having him at 3B with a low-K rotation doesn't fit well for the Pinstripers.

The addition of Brandon Drury (ADP #395, 138/504) also fogs up the immediate days. Andujar is due some grooming and growth at AAA, but could be called up with any injury opening. In deeper leagues you could try for the draft-and-stash, but you may have to sit on him for over a month. It's difficult for me to hold onto that roster spot when I could be slotting a productive hitter that is posting early-season marks. Just about the only way I would suggest you go with Andujar is if you have more than a half-dozen reserve spots on your fantasy bench.

Unlike most of the other names on this list, McMahon is in line for an Opening Day gig. The Rockies have refused to budge in free agency and seem content to throw McMahon into the fire this year. He made it palatable after his showing of a year ago when he hit over .350 at two levels while going for 20 shots, 88 RBIs, and even 11 steals.

His small cup of coffee in Denver did not go as well (.158 in 19 ABs), but if you can get any starting player from Colorado, you go for it. McMahon is no sure thing, but I could see taking a chance on him as your CI in a league of 15 teams. In a 12-teamer, he's a reserve option. A late-spring free agent could change the equation, but right now, I'd chance McMahon as a near-20 option at 1B.