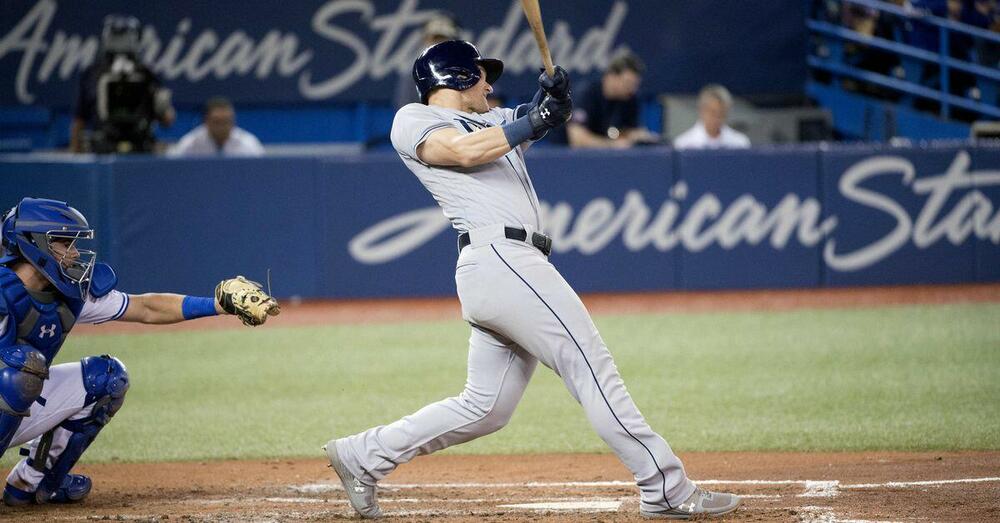 Bauers should see time at both 1B and the OF for the Indians this season, and may already qualify at both positions to start the season. Bauers showed some power (11 HR's, 35 XBH's in 96 games) for the Rays last season, but struggled to make contact with a 26.8% K% that led to a .201 BA. In the minors, Bauers was somewhat the opposite, as he didn't show a lot of power, but he did show good speed and made pretty good contact. Considering his minor-league track record and the fact that his 11.0% SwStr% wasn't that terrible, we can expect his strikeout rate to down this season and his BA to rise significantly. Solid 41% Hard Contact rate and 104.5 BBS on his 11 HRs in a limited 323 ABs. As mentioned he needs to improve overall contact rates to stay in lineup, but even GB/FB splits will aid him, and solid 13.6% BB rate will help his OBP allure. Can reach next level w/ improvement verses LHP (319). It's not unheard of for a player to develop his power after reaching the majors, so Bauers really has the potential to be a multi-category asset.

The Indians signed veteran Hanley Ramirez to a minor-league contract on Tuesday and he is expected to have a chance to get regular at bats as a DH for the Tribe this season. If that happens, then Carlos Santana would likely see more time at 1B, while Jake Bauers could end up spending more time in the outfield. At the pinnacle of his career, Hanley was a fantasy first-rounder, but things have been quite different in recent years. In 4 years with the Red Sox from 2015-18, Ramirez hit .260 and averaged 19.5 HR's and 5 SB's per season, while playing an average of 107 games per year. Those numbers aren't terrible, but at age 35, it's hard to imagine he's getting any better or healthier. His power numbers are capped by relatively low FB-rates, and he hasn't been stealing bases for years. There isn't a lot of fantasy appeal here.

The addition of Hanley Ramirez may mean that Santana spends more time at 1B than DH this season, but it shouldn't really affect his fantasy value. You pretty much know what you're getting with Santana; 20-something HR's, and somewhere between 70-90 runs and RBI's, to go along with a mediocre BA. He did hit a career low .229 last season, but he also had a career best 13.7% K% and suffered from a career-low .231 BABIP, so expect his BA to creep back up closer to the .250 mark. In OBP leagues, Santana has significantly more value as he has posted an OBP north of .350 in every season of his career thus far. You won't find many hitters this consistent going in the later rounds of drafts.

It's hard to pencil anyone into the Cleveland outfield these days, but Naquin likes as good a bet as any to get regular playing time there. His early spring results haven't done anything to change that, as he's already homered and doubled in his first 8 AB's. Naquin hasn't yet been able to match his surprising rookie campaign in 2016 when he hit .296 with 14 HR's in 116 games. The decline was somewhat predictable considering his .411 BABIP and 30.7% K% from that season, but Naquin has actually improved his K% since then, making his .264 BA in 2018 look repeatable. Unfortunately, his power has evaporated and he doesn't hit enough FB's (23.3% FB% last season) to expect a big turnaround. He has also only stolen one base in 80 games over the past two seasons. Even if he receives every day AB's, he needs to show more before being considered a valid fantasy option.

Thankfully, Martin appears to be healed from the serious bacterial infection that hospitalized him last season, and like Tyler Naquin, he looks like a good bet to get regular at bats in the Tribe outfield. Martin has missed a lot of games over the past two seasons, but this is a player who stole 105 bases from 2013-16. Even since then, he hasn't been too bad on a per game basis, racking up 14 HR's and 14 SB's in 133 games in 2017-18. Perhaps the most exciting thing about Martin was that his FB% increased last season to a career-high 46.1%, marking the 4th year in a row that that number has increased. If that trend keeps up, 20+ HR's is not at all out of the question. He probably carries the most fantasy intrigue of all Cleveland outfielders.

Daniel Palka sitting out with injury

Palka has been sitting out for a few days with a hamstring injury, but hopes to be back in action before long. Palka seemed to come out of nowhere with 27 HR's in 124 games last season, but it may not have been completely out of nowhere as he did show a lot of power in the minors. Palka's FB% was mediocre last season, but he did have an excellent 92.3mph avg. exit velocity which supports the power breakout. Unfortunately, his 34.1% K% last season does not forecast good things in terms of his BA. There's also the playing time issue, as Palka currently sits behind Jon Jay, Adam Engel, and Nicky Delmonico in the White Sox OF depth chart, although presumably they'll find him regular at bats if he continues to hit for that type of power. Palka could be a decent late-round pick if you're just searching for HR's, but be ready to cut bait if he starts hitting the bench too often.

Giolito is supposedly changing the mechanics of his delivery this season, and believe me he'll need it, considering last year's disaster. He was one of the worst pitchers in baseball last season posting a 6.13 ERA, 5.46 xFIP, 6.49 K/9, and 4.67 BB/9. All of those numbers are terrible, and make him completely un-ownable right now in fantasy. He was once a top prospect so the White Sox shouldn't give up hope yet, but that potential isn't something fantasy owners should be relying on at the moment.

Tatis homered for the second straight game on Wednesday and is 3-9 with 2 HR's thus far in Spring Training. He has shown a lot power and very good speed in the minors, although he also strikes out at a very high rate. The 20-year old isn't expected to start the season with the Padres, but he should make his MLB debut at some point this season. When he does, don't expect a high BA, but do expect good counting stats.

Urias pitched a 1-2-3 inning in his Spring Training debut on Wednesday, and Dodgers manager Dave Roberts said that he still could make the Dodger's rotation. Urias has only pitched 27.1 regular season innings over the past two years, but he posted a 3.3 ERA and 9.82 K/9 across 77 IP's in 2016. He was even a bit unlucky that season considering his .358 BABIP. If Urias does make the Dodgers' rotation, he carries some fantasy appeal, even though he would likely be on an IP limit. As long as he is on the mound, he's likely to produce good results.

After a 2017 in which Hamels' K% and SwStr% plummeted and he appeared to be at the beginning of the end of his career, Hamels rebounded last season with an 8.87 K% and 12.1% SwStr% that mirror his career totals. It's reasonable to think that Hamels could be a fantasy asset again this season, especially pitching for the Cubs, who are supposed to be a winning team in the NL. Just don't expect a repeat of the 2.36 ERA he posted in 12 starts with the Cubs last season; at 35 years old, he is not the ace he was at the pinnacle of his career.

Kershaw is expected to test out his sore shoulder again Thursday by playing catch. The injury has been bothering him since last week. The longer this lingers, the better chance there is that Kershaw isn't ready to start the season, opening the door for someone like Julio Urias or Ross Stripling to join the rotation. The Dodgers are still saying that they expect Kershaw to be ready for Opening Day, but that's obviously not a guarantee. Injuries have already pushed Kershaw out of the 1st round of drafts, but at this point I would have a hard time investing in the ace even at a slightly lower price.

Brinson hit two HR's for the Marlins in their Spring Training game against the Mets on Wednesday. Even with a strong spring, it's hard to remain optimistic about Brinson who has hit .189 with a 29.7% K% and 17.2% SwStr% through 130 MLB games. He also has a 52.4% GB% which limits his power potential. He has had a lot of success in the minors so there's always the chance of a breakout, but if that does happen, my fantasy team probably won't be the one benefitting from it.

Bird hit a 3-run HR against the Tigers on Wednesday. He is currently battling Luke Voit for the Yankees 1B job, but Voit currently has the advantage considering how good he was last season and how bad Bird was. Bird hit below .200 for the 2nd straight season, and his power numbers took a dive too, hitting just 11 HR's in 84 games. He hits tons of FB's which is typically a good thing in Yankee Stadium, and he did hit 20 HR's in 94 games through his first two MLB seasons, so his power may very well rebound. There's still a chance he could end up as a solid source of HR's for the Yankees, but he may be running out of chances in New York.

Fulmer made his first Spring appearance since having knee surgery this offseason, and the numbers weren't great, as he allowed 4 ER's in 2 IP. Fulmer's mediocre K% finally caught up with him last season when he posted a 4.69 ERA, and it didn't help that his BB/9 rose to over 3.00. Despite putting up solid numbers in his first two seasons, Fulmer has a career 4.15 xFIP, 7.03 K/9 and 24-31 record for the lowly Tigers, making him no more than a back-of-the-rotation fantasy SP.

James suffered a quad injury earlier in the week, and Astros manager A.J. Hinch is now saying that it doesn't look like he will make the Opening Day rotation. This means that either Brad Peacock or Framber Valdez have better chances to secure the 5th spot in Houston's rotation. James was sensational in 23 MLB IP last season, posting a 2.35 ERA, 11.35 K/9, and 14.3% SwStr%. He can probably be ignored in drafts at this point, although there's a good chance we still see him in 2019, and he shouldn't be ignored whenever that time comes.

With Josh James' injury apparently taking him out of the picture for a spot I the Astro Opening Day starting rotation, Peacock now has an increased likelihood of opening the season as a starter. Peacock pitched out of the bullpen last season and posted an excellent 13.29 K/9 and 2.82 xFIP, while getting a bit unlucky with his 3.46 ERA. His most recent regular stint as a SP was quite successful as well; in 2017, he made 21 starts, and recorded a 3.22 ERA (3.65 xFIP) with a 10.88 K/9. If Peacock does make the Astor rotation, he should be viewed as a viable fantasy option.