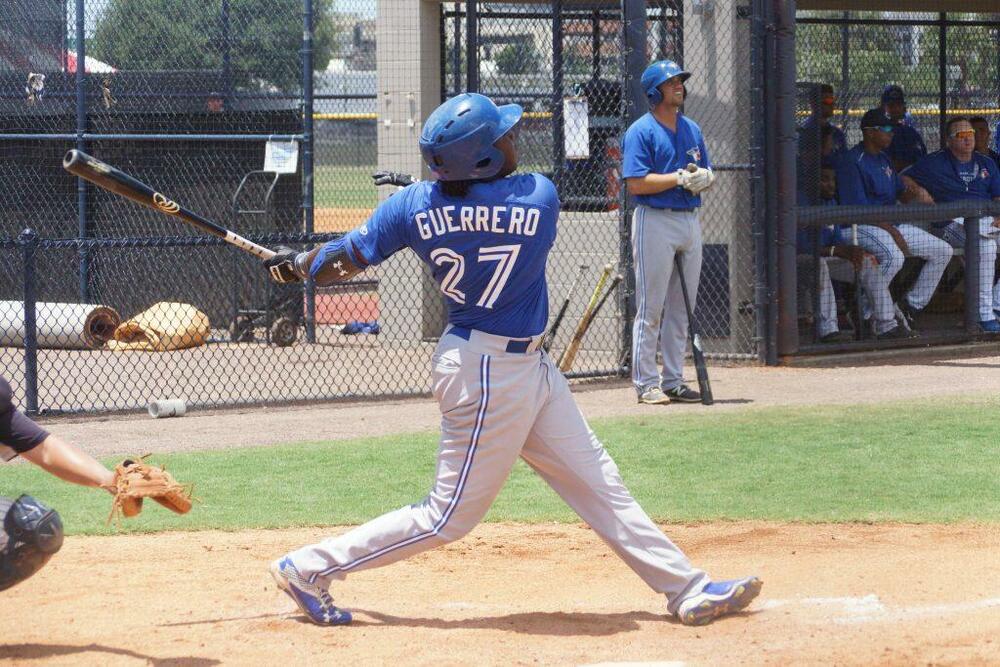 Black and Blues in Toronto

Vladimir Guerrero Jr. suffered a Grade 1 oblique strain yesterday; the team estimates that he will need 3 weeks to recover. This shouldn't have a large fantasy impact as Guerrero was going to spend the first portion of the season in the minors anyway; however, oblique injuries can be the type of injuries that nag for a while. This will likely cause Vlad Jr. to miss some time at the MLB level, simply because he'll be delayed in the number of at-bats he'll get. Hopefully he heals quickly, as we (and the rest of baseball fans) have very high expectations for Vladdy, as we're projecting 26 HR and a near .300 average. This injury could be a blessing in disguise for Blue Jays management, as they were receiving serious backlash for holding Vlad back, but it seems as though that issue has resolved itself.

Bud Norris recently signed with the Blue Jays; he'll likely end up in a set up role behind Ken Giles. Norris had 28 saves last year with the Cardinals and was serviceable as he posted a 3.30 SIERA. He's not an overly dominant reliever, but can clearly get the job done in the 9th. He could end up in the closer position at some point in 2019, particularly given the volatility of the Jays pen.

Teoscar Hernandez quietly had 22 HR last season and looks to repeat that at his age 26 season. Hernandez is making a great case to be the leadoff hitter for the Jays this season, which would add substantial value to him given the additional AB. Hernandez doesn't fit the bill as a typical leadoff hitter (low OBP), but the Jays don't have too many options. He'll have to work on his K% to make a fantasy impact in most leagues, but he's still young enough that we may see the improvement.

There were high expectations for Justin Smoak last year coming off his 38 HR campaign, but a repeat appeared unattainable. Last year Smoak saw a meaningful decrease to his Hard% and a decrease on his home run distance. It's unlikely that we'll see the 2017 version of Smoak again, so he's likely to be a low tier 1B option. Given the pedantic offense around him, it's tough to see a lot of upside here as 2017 looks to have been his career peak.

Clay Buchholz is returning to the AL East, where he will likely be welcomed with open arms. Despite an incredible 2.00 ERA in 99 innings last season, Buchholz should likely be left off your draft boards. He benefitted from an incredible 86% strand rate and 8.7% HR/FB rate, which is sure to increase as he plays more games against the high powered Yankees and Red Sox offenses. Buchholz still has the ability to wow you, but it will be difficult for him to do that consistently over 30+ starts. Don't buy into last years stellar snapshot.

Rest of the League

Dave Roberts reversed course yesterday and indicated that Clayton Kershaw still could start on opening day, his ninth consecutive. Kershaw had a strong workout the day prior, which is encouraging. However the last few weeks have been a microcosm of what is likely to be an up and down year for Kershaw; I'd be shocked if he didn't end up with at least one DL stint, particularly if the Dodgers attempt to rush him back for an arbitrary opening day start.

Bryce Harper made his Phillies debut yesterday, walking twice and scoring a run following a Rhys Hoskins home run. We'll likely hear that a few times this season. Expectations for Harper are high in Philly, and it's likely that he'll come through as he'll benefit from a better offense and a more favorable home ballpark for lefties. Last season's 34 HR/100 RBI will likely be Harper's floor.

Shohei Ohtani threw for the first time yesterday since Tommy John Surgery. He isn't expected to pitch in 2019 - as we know - but it looks like a May time frame is legitimate as he could be close to a full time designated hitter. He was a bit fortunate last season with his HR/FB rate and BABIP, but with consistent playing time, we could see improvements to his game that will mask that.

Marcel Ozuna is likely to be taking the field as early as next week. Ozuna looks to have a bounceback season, which seems reasonable given his offseason surgery to repair his shoulder and the addition of Paul Goldschmidt. Ozuna regressed even more in 2018 than we thought - too much- that could make him an excellent value on draft. 30 HR is on the table.

Jimmy Nelson will make his Cactus League debut on Monday following a 2 inning simulated session. There's still no return date for Nelson as he recovers from 2017 surgery. It typically takes nearly two years to fully get back from TJS; however, it's worth nothing that Nelson had his surgery in September of 2017, as compared to someone who was injured during the 2018 season. The extra time for recovery may help his skills come back a little quicker than we've seen with some other guys. His 2017 was dominant (3.33 ERA, 199 K in 184 innings), making him a last round flier to stash if you can afford the roster space or have DL spots to use.

Masahiro Tanaka was named the Yankees opening day starter, despite not being the team's best starter. Tanaka is a volatile fantasy option; he posts an elite SwStr%, but has a handful of the uglier starts you'll see all season. He's clearly a valuable starter, but he's far outside our top 25 pitchers. Add to the fact that health is consistently a concern for Tanaka, and I'm staying away unless he falls pretty far in drafts.

Tweets by Fantistics
Introduction to Barrels & Exit Velocity:
ADP and it's Ramifications: March 11, 2019