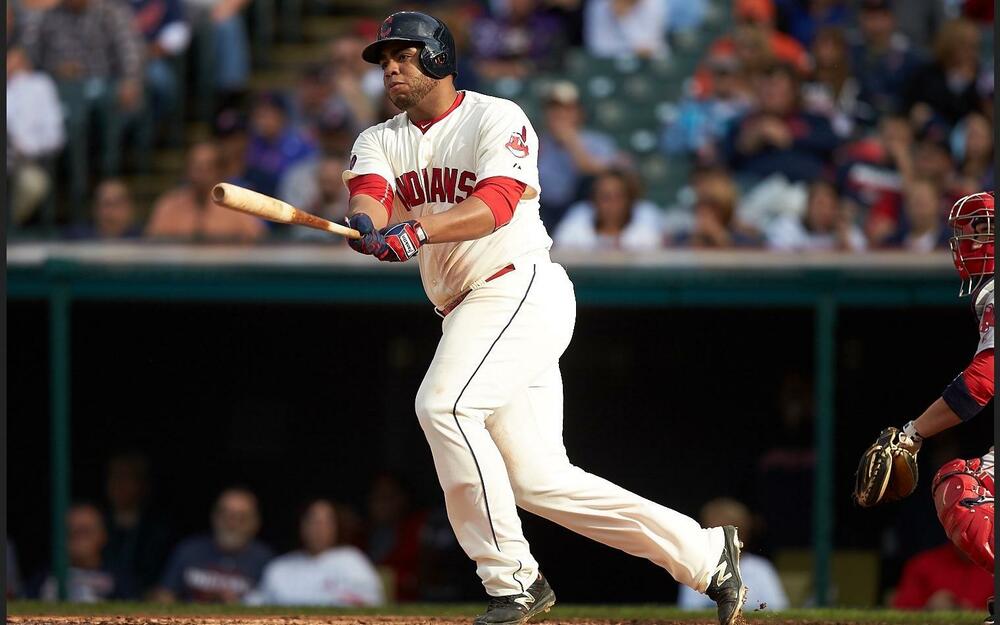 Who will replace Santana at IB?

While Indians fans have mostly been mourning the trade of Francisco Lindor and Carlos Carrasco to the Mets in January, less attention has been paid to the departure of 1B Carlos Santana, who signed with the Royals this winter. The Indians didn't do anything to replace Santana in the offseason, as their focus has apparently been more about saving money than bringing in players. So who might be the Indians starting 1B when the season begins in about a month and a half?

Currently, utility man Mike Freeman is listed as the only 1B on the Indians' depth chart. But even the Indians wouldn't go as low as making Freeman their everyday 1B. He's 33, and owns a career .232/.315/.330 slash line with 5 HR's across parts of 5 seasons. He is likely set for a utility role again in 2021, and is just listed on the depth charts as a placeholder.

The favorite for the 1B job may be Bobby Bradley, whose only big league experience thus far came in a 15 game sample in 2019. During that stint, Bradley struggled with a .178 BA and 40.8% K%, but also showed some power with 6 XBH's in 45 AB's. His minor league results have been similar - in 2019, he struck out 33.8% of the time in AAA, but also hit 33 HR's and produced a .567 SLG. He certainly has power potential and 2021 may be Bradley's first opportunity to show that he can deliver that type of power consistently at the MLB level.

Bradley's primary competition may be Jake Bauers, who played for the Tribe in 2019, but was left off the roster last season. In 213 big league games, Bauers has slashed .214/.314/.377 with 23 HR's and 9 SB's. He has struck out at a 27.0% clip, but his 10.1 SwStr% suggests that he could improve on that number if he were a bit more aggressive at the plate. Still, Bradley's power upside would seem to give him the upper hand for the 1B job over Bauers' track record of mediocrity.

Another option at 1B for the Indians could be OF Josh Naylor, who made 5 appearances at first in 2020; but it is more likely that the team will continue to use him in the outfield. Naylor has had a rather unimpressive start to his big league career, slashing .249/.309/.383 over his first two seasons with 9 HR's in 383 PA's. His 11.5% K% last season was promising, but his power has been very limited due to a career 5.5 launch angle and 53.1% GB%. He still figures to get regular AB's against RHP's in 2021, although he's unlikely to play much again southpaws; the Indians afforded him only 6 PA's against LHP's in 2020 (and pinch hit for him against a lefty in the postseason, even though he was 5-7 in the series). If Naylor does end up playing at 1B, it would give him a bit more position flexibility, but wouldn't do much to increase his overall fantasy value.

Can Mercado Bounce Back?

Oscar Mercado had a dreadful 2020, slashing .128/.174/.174 with 1 HR across 93 PA's, and at one point was sent to the Indians' alternate training site due to his poor performance. He had an impressive 15 HR, 15 SB campaign in 2019 and hit .269 with a .761 OPS that season, but last year his K% jumped from 17.4% to 29.0% and his IFFB% doubled from 9.6% to 19.2%. I would expect to see Mercado bounce back at least somewhat in 2021 as his 13.1% SwStr% last season wasn't out of control and his 88.2 EV remained solid. Considering his success in 2019, Mercado should get the first crack at being the Indians starting CF this year. While I wouldn't anticipate a high average or tons of power, he can provide plenty of fantasy value with his speed, as long as he's playing regularly. Mercado had 4 straight 30+ SB seasons in the minors, and even 20-25 SB's can be extremely valuable in baseball's current climate.

If Mercado struggles early, that could present an opportunity for Bradley Zimmer to get more playing time in CF. But like Mercado, Zimmer struggled mightily in 2020, hitting .162 with just 1 XBH and a 28% K% across 50 PA's. His Statcast numbers were very weak as well, as he posted a 16.7% HardHit% and 84.1 EV in the limited sample size. Those numbers were a lot better in his first two seasons (39% HardHit%, 90 EV), but even then he failed to produce great offensive numbers. Like Mercado, Zimmer's biggest potential fantasy asset is his speed (24 SB's in 164 career games) but he's less like likely to have the opportunity to play regularly.

Back of the Rotation

The White Sox look to have a strong rotation for the 2021 season led by Lucas Giolito, Dallas Keuchel, Lance Lynn, and Dylan Cease. The projected 5th starter is Carlos Rodon, who has struggled with injuries throughout his career and has thrown a combined 42.1 IP over the past two seasons. Rodon had a solid rookie campaign back in 2015 when he posted a 3.75 ERA, but his ERA has never been below 4.00 since. His K/9 dipped to a worrisome 6.71 in 2018, but improved to 11.94 in his abridged 2019 season (7 starts). While it was a small sample, the uptick in strikeouts gives a glimmer of hope for Rodon, although he shouldn't be trusted in fantasy at the moment due to his inconsistent health and production.

That leaves Reynaldo Lopez on the outside looking in for a rotation spot, although he could be next in line if a spot opens. Lopez' 2020 was nothing short of a disaster; he only made it through 26.1 across 8 starts, posting a 6.49 ERA, 6.19 xFIP, and 24:15 K:BB, while allowing 9 HR's. Lopez has been a below average pitcher throughout his career, but at least he had been an innings eater until last season. 2021 should be an opportunity to see if he's better suited for the bullpen.

After opting out of the 2020 season, Michael Kopech will likely open the 2021 season in the minors, but should join the big league team before too long. Kopech had a nice 15:2 K:BB in 14.2 IP in his lone MLB stint in 2019 and is considered the #2 prospect in the White Sox system. While it doesn't look like he'll begin the year in the rotation, he is expected to be a big part of the White Sox future and could show some of that upside as soon as this season.

Andrew Vaughn appears likely to make his debut for the White Sox in 2021 and fill the DH role, although it's not clear yet if he will be with the team to open the season. Vaughn was the 3rd overall pick in the 2019 draft, and hit .278/.384/.449 with 6 HR's in 55 minor league games in 2019. If Vaughn starts the season in the minors, other players on the White Sox roster, such as Leury Garcia, should get some extra AB's, but Vaughn is expected to be with the team sooner rather than later.

Turner to resign with LA

James Paxton has signed a 1-year $8.5 million deal to rejoin the Mariners, following a 2-year stint with the Yankees. Paxton only pitched 20.1 IP last year, but posted a K/9 above 11.00 for the 3rd straight year. His 6.64 ERA last year was ugly, but it was an extremely small sample, and he hadn't posted an ERA above 4.00 in any of his previous 7 MLB seasons. The move back to Seattle should theoretically help in term of his home ballpark, although he's also less likely to earn wins. The main concern with Paxton is his health, but as long as he's on the mound, he should provide solid value.

The Yankees have signed veteran slugger Jay Bruce to a minor league deal. It's unclear what Bruce's chances are of making the Opening Day roster, but it would take an injury to one of the Yankees' starters for Bruce to receive any regular playing time. Bruce has hit below .230 in each of the past 3 seasons, but has still shown good power, posting an ISO's of .306 and .271 over the past two seasons respectively. If he at some point does work himself into the Yankees lineup, we could see that power once again, as the Yankees have a knack at making their hitters productive. For his career, Bruce has 318 HR's, and is still only 33 years old.

Although the Yankees just signed Jay Bruce to a minor league deal, that doesn't mean they necessarily won't bring back veteran OF Brett Gardner for a 14th season. Gardner hit just .223 with 5 HR's in the abbreviated 2020 season, but in 2019 he hit a career-high 28 HR's. Gardner has increased his Launch Angle over the past 2 season and his 89.2 EV last year was his highest in the Statcast Era, so he could still be a productive player in 2021. While the Yankees OF and DH spots are currently full, it wouldn't be a bad idea for the team to bring in reinforcements considering the injury history of Aaron Judge and Giancarlo Stanton.

Harvey gets a Chance with the O's

Matt Harvey has signed a minor league deal with Orioles as Baltimore continues to add options for their starting rotation. It's hard to imagine why a team would want to bring in Harvey after he posted an 11.57 ERA across 11.2 IP's for the Royals last season and wasn't much better when he recorded a 7.09 ERA in 12 starts for the Angels in 2019. His K/9 has been under 8.00 each of the past 5 seasons and his ERA has been north of 4.80 each of those years. But apparently the Orioles may not have any better options right now.

Taijuan Walker Still on the Market

With former teammate James Paxton reportedly signing with the Mariners, Taijuan Walker remains one of the top SP still available in free agency. Walker posted an impressive 2.70 ERA across 11 starts last season, and was especially good after being traded to the Blue Jays, putting up a shiny 1.37 ERA in 6 starts. But his xFIP was a mediocre 4.86 and his 8.44 K/9 and 3.21 BB/9 are nothing special. Expect Walker's ERA to climb back to the 4.00's for whichever team he ultimately signs with.