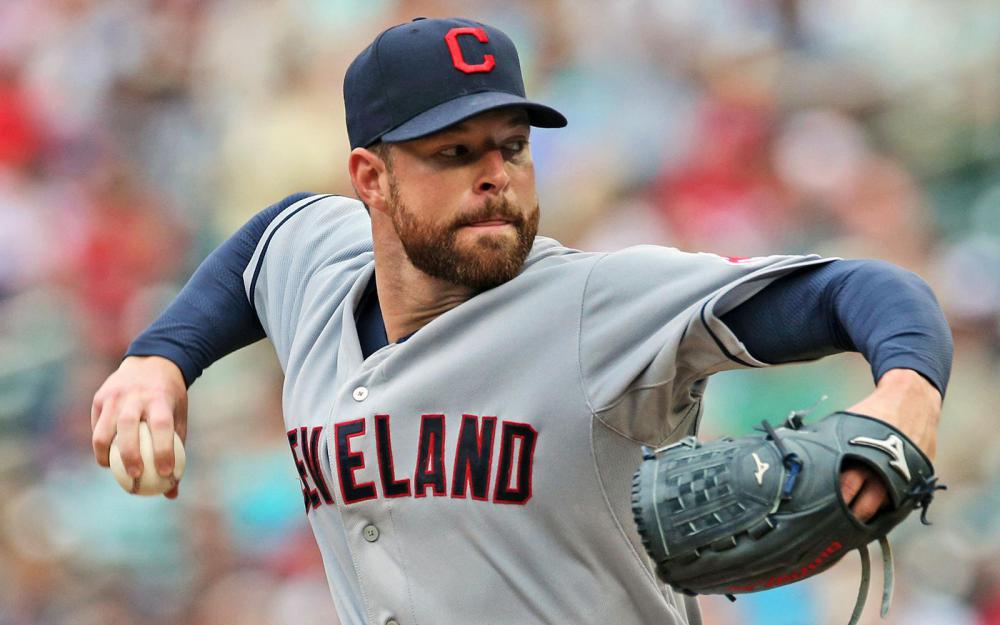 In case you weren't sure, the reigning AL Cy-Young Award winner Kluber will start for the Indians on Opening Day this Thursday against the Mariners. Kluber has been an ace for four years, but last year he turned it up a notch, producing career bests in K/9 (11.71), BB/9 (1.59), SwStr% (15.6%), ERA (2.25), xFIP (2.57), and WHIP (0.87). His spring numbers indicate that he's ready to pick up where he left off, as he compiled a 2.29 ERA and 25:5 K:BB in 19.2 IP this spring. It's fair to expect some slight regression to his K%, but with hitters apparently less concerned about striking out these days, expect the Klubot to continue taking advantage. In addition to the strikeouts, Kluber has done a good job of avoiding hard contact, although his .267 BABIP from last season is still probably due for a bit of regression. Don't expect a repeat of his 2017 ERA, but a mark in the high 2.00's/low 3.00's would be a reasonable projection. He should be (and is being) drafted as a top-4 SP, and there's nothing wrong with taking him as high as SP #2.

With Michael Brantley set to begin the season on the DL, Naquin will make the Indians' Opening Day roster. Naquin has had a nice spring in which he has hit 2 HR's and 7 2B's in 51 AB's for a .549 SLG. He also has a decent 10:5 K:BB. He has shown moderate speed and pop during his career, including 14 HR's with the Tribe in 2016 and 10 HR's in 80 games at the AAA level in 2017. The problem for Naquin is his exorbitant K%, and as a result of that, his playing time isn't steady. If he could even cut his K% to the low 20's, (30.7% in 2017), he could hit for a solid BA, especially since his BABIP tends to be high. If that were to happen, the Indians would likely find a way to give him more regular playing time, but that's a big if.

After years of hitting a lot of ground balls and not a lot of HR's, Alonso altered his swing and hit 48.7% FB's in the first half of 2017. As a result, he had 20 HR's by the All-Star break, more than double any of his previous full seasons HR totals. But then in the 2nd half, he seemed to revert back to his old ways, hitting 36.1% FB's and just 8 HR's. While the 8 HR's in 63 games was still a better rate than Alonso had ever had previously, that's not exactly what you're hoping for from a fantasy 1B. So which version of Alonso should we expect to see from the Tribe in 2018? If Spring Training is any indication, Alonso has hit 7 HR's and slugged .917 in 48 Cactus League AB's and it seems like the fly balls are back. Moving from pitcher-friendly parks in Oakland and Seattle to a more hitter-friendly Progressive Park will also help Alonso, but the key for him is to continue to hit the ball in the air. Right now, he seems to be doing just that, and could be a huge win for those who draft him at his current ADP of 230+.

Candelario to bat in the two-hole

It's looking like Candelario will be the Tiger's #2 hitter to start the season, with Miguel Cabrera hitting in the #3-spot behind him. Candelario has earned this premiere spot in the lineup with an excellent spring in which he's hit 10 XBH's, including 2 HR's, in 52 AB's, and perhaps even more impressive is his 7:10 K:BB. He has had mostly good BB-rates through the minors, and an above-average 9.6% BB% across 156 MLB PA's, so he could at least be in a good position to score a fair amount of runs. His .283 BA last year, however, is due to decline as he benefited from a .351 BABIP despite a poor 28.9% Hard%. He has shown moderate power in the minors, which could improve over time, but right now there's nothing that stands out about Candelario that make him a strong consideration in standard fantasy leagues.

Engel will be the starting CF for the White Sox to begin the season, while Ryan Cordell, who had been the other candidate, was assigned to AAA. Engel played in 97 games with the White Sox last season, hitting a brutal .166 with a 34.8% K%. He didn't hit the ball (25.5% Hard%), hit a lot of pop-ups (21.3% IFFB%) and didn't hit many line drives (13.6%). He wasn't all that great in AAA either; in parts of two seasons he hit .229 with a 28.6% K% across 87 games, although he did show some signs of power with 8 HR's in 46 AAA games last season. So why is Engel at all relevant in fantasy? Well, he did steal 65 bases in 2015 and 45 in 2016, but then last year he only swiped 12 in 143 games between the majors and minors combined. Of course, part of the problem may have been that he was never on base. If Engel starts running again like he has in the past, he could become a waiver-wire SB target.

Jones, Minaya, Soria all could be used as White Sox closer

We've discussed earlier that Joakim Soria and Nate Jones were the frontrunners to collect saves for Chicago this season, but right now it appears that in addition to Soria and Jones, Minaya will also have opportunities to close games for the White Sox at least to start the season. Minaya got his strikeouts last season (10.51 K/9) but he also struggles with walks (4.12 BB/9) and gives up a lot of FB's (42.6%) so it's hard to trust him to have great ratios. If he would get the closer job outright, he would be worth owning, but for the time being, both Soria and Jones are better bets both in terms of their numbers and in their likelihood to take control of the closing duties.

Kingery has made the Phillies' Opening Day roster and signed a 6-year contract with the team, despite not having yet made his MLB debut. It's unclear exactly what position or how often Kingery will play to start the season, but you would have to imagine that if he hits, he'll find his way into the everyday lineup. Kingery hit 26 HR's and grabbed 29 SB's in 132 minor-league games last season and is currently eligible at 2B with the potential to add more positions during the season. So should you be adding Kingery to your fantasy roster right now? Yes, perhaps you should.

Broxton will begin the season in AAA, as the Brewers have too many OF's ahead of him, including Christian Yelich, Lorenzo Cain, Ryan Braun, and Domingo Santana. Broxton is anyways a risky fantasy player, as he strikes out at a ridiculous rate (37.2% career K%) and as a result, he is basically a guaranteed BA drain. On the other hand, he did go 20/20 in HR's and SB's last season, and if he would get another full season of at bats, there's no reason to think he couldn't do it again. He's obviously not rosterable right now, but even if he does work his way back into an everyday role (with the Brewers or a different team) you have to question whether the counting stats are worth the BA drop, especially since if he does fall short of last year's totals, he would really be hurting your team.

Acuna has been reassigned to the minors, but expect him to be called up shortly once the Braves gain another year of team control. Acuna hit .462 with 4 HR's and 4 SB's in 16 games this spring, after hitting 21 HR's and collecting 44 SB's in 139 games across three minor-league levels in 2017. Even with missing the first couple weeks of the season, Acuna has a legitimate chance of reaching 20/20 with perhaps more upside in the steals department. It's usually not a great idea to stash minor-leaguers in redraft leagues, but as was the case with Kris Bryant a few years ago, Acuna will probably end up being a bargain. By next year, you'll wish Acuna was available in the 12th round.

Gregorson was in line to begin the season as the Cardinals' closer, but he will now open the season on the DL with a hamstring injury. If he is able to come back quickly, there's a good chance that he will take on the closing duties at that point. While Gregorson's ERA shot up to a career-high 4.57 last season, his peripherals don't indicate such a steep decline. His 10.33 K/9 was still excellent, and while his 50.0% GB% marked a significant drop-off from the previous two seasons, it was still well above league-average. He suffered from a 23.6% HR/FB% and a .306 BABIP that is nearly 40 points higher than his career-mark. Gregorson should be able to get his ERA back into the 3.00's, and if he does get the closer job back soon, he should be a solid, if not spectacular, fantasy option.

Colon was released by the Rangers on Friday, but it's possible that he could resign on a minor-league deal. He had a decent spring, with a 3.00 ERA and a 10:2 K:BB through 18 IP, but it's hard to forget about last year's fiasco, where Colon finished with a 6.48 ERA across 28 starts for the Braves and Twins. For years, he got by with low K-rates and very low BB-rates, but last year his K% dropped even further, and his HR/9 rocketed to 1.76. Maybe Colon gets another shot, but there's no reason to have him on your fantasy team unless you just think it's cool to have Bartolo Colon on your fantasy team.

Happ is expected to be the Cubs leadoff hitter this season, which is excellent for his fantasy value. It would be even better if it means that he'll be in the lineup every day. Happ has the ability to produce in a variety of categories, although his BA is likely to be a liability considering his 31.2% K%. His 25.3% HR/FB is also probably due for regression, so don't expect his 30+ HR pace from last season, but he is still a good bet for 25 HR's and double-digit SB's and possibly 90+ runs if he remains in the leadoff spot all season. He's not a top-tier MI, he's a solid mid-to-late round option.

Wainwright will begin the season on the DL with a hamstring injury, but this is irrelevant for fantasy purposes. Waignwright has seen his K% drop to a mediocre 7.01 K/9, his BB/9 has skyrocketed to 3.28 and he no longer prevents HR's like he used to be able to. His ERA was an awful 5.11 last year, and even if he improves on that, it won't be to the extent that he's useful in fantasy.

While the Mets were hoping to have their dream rotation at full strength, Wheeler couldn't do enough to justify keeping him in the rotation to start the year. After missing about two years due to injury, Wheeler was actually not bad to start the 2017 season, posting a 3.45 ERA and 8.04 K/9 through 11 starts. His xFIP was 4.16 during that stretch but still not terrible. Then in his final 6 starts, his ERA jumped to 9.89. He was still getting K's, but his BB% got out of control, and he couldn't stop the HR's (9 in 23.2 IP). There may have been some bad luck with the high BABIP and HR/FB, but he will need to cut doen on the walks to be an effective major-league starter again.