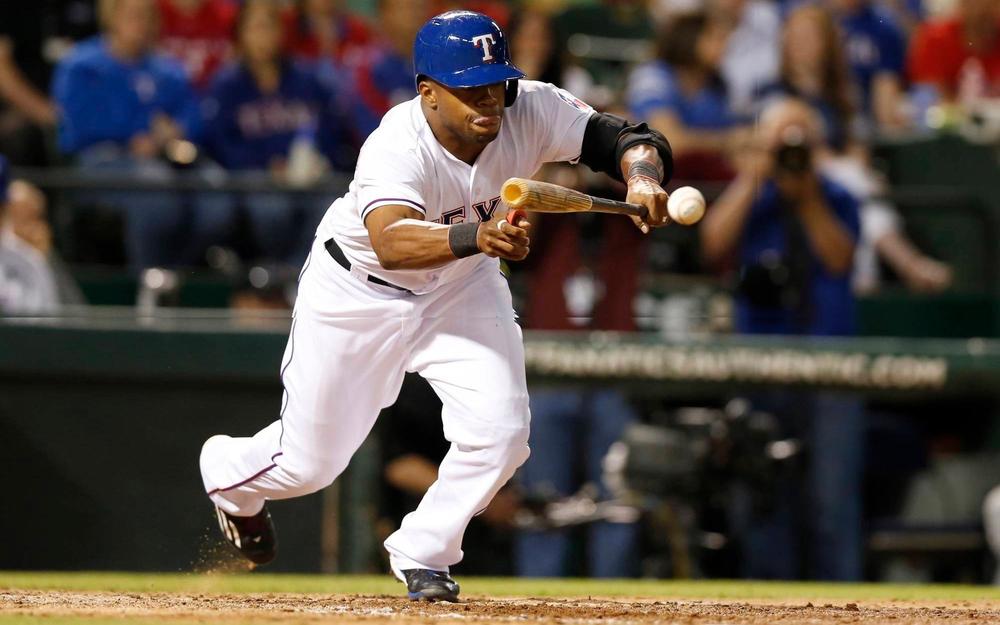 Delino DeShields had locked up the CF spot officially a couple of weeks ago. He had a strong spring, hitting .333 with an OBP of .415 and scored 11 runs in 19 games. Cactus League numbers are not necessarily a good predictor of regular season success for DeShields. He had a solid season last year, hitting .269, posting a .347 OBP, and stealing 29 bases in 440 PAs. That was after a spring in which he hit .323, stole 14 bases and posted a .442 OBP in 62 ABs. DeShields had a strong spring in 2016 also, with a .314 average. That didn't translate to regular season success as he hit .209 and spent more time at AAA Round Rock than with the Rangers. DeShields will almost certainly steal a lot of bases for Texas this year but his average will likely regress (as he had a .358 BABIP in 2017) and he could get dropped from the leadoff spot if that happens. However when you consider the prospect of getting 40+ Stolen Bases in the 19th round (ADP), he's an intriguing draft value.

The Brewers have firmed up their rotation for the start of the season. There will still be some fluidity possible as the club will insert Jimmy Nelson into the rotation when he returns from shoulder surgery sometime in the next couple of months.

With his name, Brent Suter sounds like his primary sport should use a puck, but he's been slotted into the 4th spot in the Brewers' rotation. As such, he will start their 3rd game of the season. Ah, the wonders of setting things up for a home opener. Suter made his spring training numbers look better last night by allowing 1 run in 5 IP on 5 hits while striking out 7 and walking no one. That gave him a 4.57 ERA before the games are for real. Suter struck out 25 in 21.2 IP. Last season he posted a 3.24 ERA and 1.25 WHIP after gaining a rotation spot due to injuries. Suter had extreme platoon splits in 2017, with .192/.259/.282 splits against southpaws and .285/.333/.432 against RH batters. That, combined with a fastball that sits in the mid-80s, could lead to him being exposed with poor results with more IP.

Brandon Woodruff had his major league debut last year sidetracked by pulling a hamstring warming up for his first start. He eventually got 43 IP in, but didn't get untracked. Woodruff's stats in the Cactus League this year were pretty poor, with a 7.11 ERA and 4 homers allowed in 12.2 IP. That's not what got him the last spot in the Milwaukee rotation. Woodruff throws a mid-90s fastball and struck out 173 batters in 158 IP in 2016. He is scheduled to make his first start April 6, as the Brewers won't need a fifth starter until then. If Woodruff appears out of the bullpen and struggles, though, there are other arms available at AAA (including Junior Guerra.) Woodruff still has minor league options, so his hold on that last starting spot is tenuous.

The Orioles have broken camp without a whole lot of surprises. There is a little head shaking in one direction, though.

Manager Buck Showalter indicated that Chris Davis (that's "Chris with a 'C') may end up leading off on a not infrequent basis. Davis batted first on Saturday night and in an exhibition against AAA Norfolk yesterday. If he did, that would give him more ABs, but would decrease his RBI opportunities. I wouldn't get too excited about it yet, though. Davis finished the Grapefruit League batting .211 and struck out 10 times in 28 ABs. Last year his OBP was .309 and his K% was 37.2%. Those are not the kinds of numbers anyone looks for from a prototypical leadoff hitter.

Caleb Joseph is listed on the depth chart as Baltimore's starting catcher. However, with prospect Chance Sisco nailing down a roster spot, Joseph may be heading back to his usual backup role before too long. He hit .324 in the Grapefruit League with 1 homer in 37 ABs. As the righthanded-hitting part of the receiver corps, Joseph will need to maintain an average at least as good as his .256 last season (that was aided by a .328 BABIP) and continue to show the flashes of power he has in his major league career. If a platoon situation develops, Joseph will end up on the short end.

I went to Dell Diamond for the first time Saturday for their Fan Fest. It was a nice park and I'll have to return soon to see a pitcher that is one of the few athletes built like me. And if you want to get in that shape, you should look up the Dilly Dog that will be served in Arlington this season.

Bartolo Colon and the Rangers reached an agreement on a minor league contract that will be short term, at least to begin with. He is scheduled to take the fifth starter slot with Texas when it comes up on April 2nd. The odds are that Colon will head back to AAA after that to get in some more work and serve as an insurance policy after Martin Perez is ready to come off the DL. The Rangers are no longer officially using a 6-man rotation, but Colon will unofficially fill that slot down I-35 from Globe Life Park. He had a 1.17 WHIP in Cactus League play, but allowed 4 homers in his 18 IP. For someone who had a 1.76 HR/9 in 2017, those aren't numbers to rely on for a big comeback. It's still a nice story.

Yovani Gallardo- P- MIL- Gallardo was given his official release by the Brewers, ending his effort to hook back on with Milwaukee either as a starter or reliever. He posted a 4.73 ERA and 1.50 WHIP in the Cactus League. Gallardo walked 8 in 13.1 IP. That wasn't nearly enough to get him a roster spot, following up his 5-10 record, 5.72 ERA, and 4.13 BB/9 with the Mariners in 2017.

Rafael Devers- 3B- BOS- Devers left yesterday's exhibition game after a home plate collision. (I thought those didn't happen anymore.) He suffered a knee contusion. Devers is officially listed as day-to-day but is expected to be able to play on Opening Day.

Derek Holland- P- SF- With Giants' starters going down left and right (that would be Bumgarner and Samardzjia, respectively,) enough space was opened up in their rotation for Holland to sneak in. He had been brought in as a non-roster player this spring. With a 4.20 ERA and 1.47 WHIP in the Cactus League, Holland didn't exactly knock the door down. His last healthy effective season was 2013 with Texas.

Greg Bird- 1B- NYA- Bird will be out for 6-8 weeks after undergoing surgery today to remove a bone spur from his right foot. If that sounds familiar, foot soreness kept Bird out of the lineup for most of 2017.

Ketel Marte- SS- ARI- Marte reportedly signed a 5-year contract extension that, with options, could extend 7 years. Marte will start the season at 2B for Arizona.

Ryan Flaherty- SS- ATL- Flaherty was one of two signings Monday that give the Braves some veteran depth on the bench. Flaherty is the infield part of that duo.

Peter Bourjos- OF- ATL- Bourjos was signed by the Braves yesterday to come of the bench as a defensive replacement and pinch runner when needed. Bourjos has never been able to translate his speed and potential into a full time job with the exception of 2011 with the Angels.

Garrett Richards- P- LAA- Richards was named as the Opening Day starter for the Angels. He has been injured for most of the past 2 seasons but is healthy at the start of 2018.

Dinelson Lamet- P- SD- Lamet will be on the DL for at least the first month of the season, but it could be worse. He was diagnosed with a flexor strain of his elbow. There isn't any tear in there.

Tweets by Fantistics
Preseason Prep - Mar. 26, 2018
A Look at ADP by Kyle Elfrink