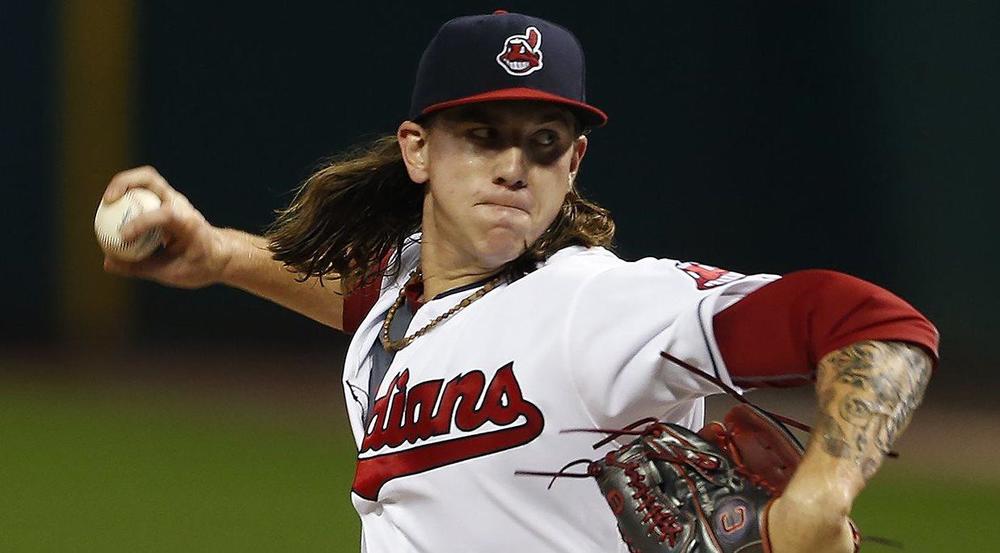 The Indians entered 2018 with six leading candidates for their rotation - Corey Kluber, Carlos Carrasco, Trevor Bauer, Danny Salazar, Josh Tomlin, and Mike Clevinger - and it looked like either Tomlin or Clevinger would be the odd man out to start to the season. But with Salazar (shoulder) now unlikely to be ready by Opening Day, Tomlin and Clevinger both have the inside track to fill out the starting five to start the season, while Salazar is hoping to join the rotation at some point early in the season.

Salazar's traditional numbers (5-6, 4.28) were down last season due to a subpar first half, but his peripherals tell a different story. His 33.0% K% and 16.8% SwStr% were elite, and his 3.21 xFIP was among the league's best. He suffered from a .343 BABIP despite an excellent 25.9% Hard%, and that number is almost sure to regress in 2018. Salazar did allow a LD% of 25.3% last season, but that isn't much of a concern considering the low year-to-year correlation of LD-rates for pitchers. He would seem to be a top-25 SP option if healthy, but he's already set to open the season on the DL with a shoulder injury, so his ADP of 167 (Fantasy Pros) is quite understandable. That being said, there aren't many pitchers of his quality sitting around that late in drafts, and taking him in the 17th round doesn't seem like such a high risk.

Tomlin has had some bright spots for the Indians over the years and can even be a solid spot-starter in fantasy at times, like at the end of last season when the Indians were nearly unbeatable and facing weak opponents. In Tomlin's last 10 starts of 2017, he went 6-0 with a 3.11 ERA and 0.95 WHIP. But looking at the bigger picture, Tomlin's career ERA, FIP, and xFIP are all above 4.00, he doesn't get a lot of K's and gives a lot of FB's and HR's. His 1.47 HR/9 last season was actually low for him, but still much higher than league average. Tomlin looks primed to make the Indians rotation out of the gate, but he's not at all a lock to remain there, and even if he does, he's not someone to be thinking about on draft day.

Clevinger improved his K% to 27.3% in 2018 en route to a 3.11 ERA in his first (almost) full season for the Tribe. His high BB% is a reason for concern, but the strikeouts give Clevinger a lot of promise as a fantasy starter. With Danny Salazar set to begin the season on the DL, Clevinger is expected to open the season in the Indians' rotation, and there's good reason to think he'll remain there throughout the season. Interestingly, Clevinger fared better as a starter last season (2.84 ERA) than he did in relief (7.04 ERA in 7.2 IP). Assuming he remains a starter, Clevinger appears to be a steal at his current 200+ ADP.

If Brantley (ankle) is ready to play at or near the start of the season, he will be the everyday left-fielder and should continue to help in multiple categories. His contact rate has declined a bit over the past two seasons but is still well above league average, making him a good bet to hit close to .300. His power and speed have also both waned a bit since his 20/20 season in 2014, but he still projects to reach double-digits of each if he can even play the majority of the season. With an ADP hovering around 250, there's no real risk in drafting Brantley, who has a solid floor if he's healthy.

After spending 3 years in the Tigers bullpen, Wilson is trying it out for Detroit's rotation this spring. So far the audition has not gone well; Wilson has allowed 11 hits and 9 ER's in 4 IP in the Grapefruit League. But that's not why Wilson isn't worth considering in fantasy leagues, even if he does remain a starter. He did post three consecutive sub-3.00 ERA seasons out of the bullpen from 2014-16 before that number jumped to 4.50 last year, but even in his better years, he wasn't exactly dominant. His K/9 hasn't hit 7.0 since his rookie season, his SwStr% has always been below 9%, and his best ever xFIP was 3.88 in 2014 (career 4.46). And those numbers usually decline when converting to be a starter. The best chance Wilson has of being fantasy relevant in 2018 is if he goes back to the bullpen and something happens to closer Shane Greene. It's possible that Wilson would be next in line for saves.

Martin has been used as the leadoff hitter in Spring Training thus far, which would indicate that the Tigers are considering using him in that spot to start the season. This would potentially give Martin some extra PA's, but it doesn't suddenly make him a fantasy commodity. He has been a solid contributor in steals over the years, averaging 26 SB's a year from 2013-16 (and 7 in 49 games last year) but that's about the only thing he contributes. His career BA is .247, his Hard% has never even reached 30%, and right now his 15 HR season in 2016 looks like a positive outlier (next highest total is 8). Even if Martin remains as the Tigers leadoff hitter the entire season, he's barely worth a spot in fantasy, but considering his offensive struggles throughout his career, even remaining in the lineup the whole season isn't that likely.

Giolito made his White Sox debut last August and made 7 starts for the big-league team compiling a 2.38 ERA across 45.1 IP. While this impressive stretch has put him on the minds of many fantasy owners, it's important to note that Giolito had a mere 6.75 K/9 and an xFIP of 4.42 last season. He benefitted from a .189 BABIP, which is even more unsustainable considering that Giolito's batted ball distribution was no better than average. At age 23, he could still improve, but don't be fooled by what he did last year.

After spending about half the season with the White Sox last year, Moncada is set to take on an everyday role for the 2018 campaign, perhaps even hitting near the top of the lineup. I was a bit surprised to see Moncada's ADP at 140 being that he didn't put up such great fantasy numbers last season, although he did hit 5 HR's in 24 September games. His K% sat at a lofty 32.0%, and there isn't much in his profile that suggests he'll outslug his pace of 8 HR's in 54 games in 2017. He did post a solid .338 OBP last season and that should allow him to reach respectable runs and steals totals, but I don't think it's fair to expect much more than .250 and 20 HR's. Considering his high K%, Moncada could conceivably continue to struggle at the big-league level, and there's seems to be a lot of risk in taking him as a mid-round pick.

The Royals may have lost Eric Hosmer and Lorenzo Cain to free agency this offseason, but Moustakas will be returning to Kansas City for at least one more season after agreeing to a deal with the club on Thursday. This is excellent news for anyone who drafted Moustakas, as reports earlier in the week suggested that Moose may not sign until June. Now that he's slated for a full season of work however, it's fair to expect another solid power contribution from Moustakas after he blasted 38 HR's in 2017. His 17.8% HR/FB from a year ago is likely to regress a bit, but he hits tons of FB's (45.7% last year) which makes him a solid bet to approach 30 dingers once again. And while Moose has never hit for a high average, he actually does make good contact (career 15.5% K%) so it's reasonable to project a BA around .270, a mark that he has covered in each of his past two full seasons. With a team in place, Moustakas rates as a pretty safe mid-round pick.

Gonzalez and the Rockies are reportedly close to agreeing on a 1-year deal to bring CarGo back to Colorado; a best case scenario for Gonzalez' fantasy perspective. After several years as a fantasy superstar, CarGo declined rapidly last season, finishing with a .262 BA and 14 HR's in 136 games. While he did have an excellent September, that won't be enough to give owners confidence in a guy who hit just 8 HR's and posted a .664 OPS through the first 5 months of the season. His 31.9% Hard% was his lowest since 2011 and his GB% approached 50% severely limiting his power potential. The good news is that CarGo still hit .323 with a .923 OPS in Coors and had an .836 OPS against RHP's so there are times he can be valuable in daily leagues. But from a season-long perspective, he's hard to trust.

Simmons hurt his shoulder making a dive on Thursday, and is scheduled to get an MRI. He had somewhat of a breakout/resurgence in 2017 when he hit 14 HR's and collected 19 SB's following three subpar offensive seasons. But he increased his FB% significantly while his Pull% rose nearly 10% and that translated to moderate power to go along with his always excellent contact rate. It's hard to expect more from Simmons than what he showed last year, but double-digit HR's and SB's to go along with a BA that won't hurt you is definitely a valid choice if you're in need of a MI late in the draft.

There are rumors that the Padres are interested in signing Arrieta, which would be a good thing for his fantasy stock. After two years as one of the elite pitchers in baseball, Arrieta has declined a bit over the past two seasons, as his BB/9 has risen to around 3.00 and his K/9 has dipped below 9.00. His SwStr% last year fell to 8.7%. In addition, he allowed more FB's last year and his HR/9 skyrocketed to 1.23. Even with all that decline however, Arrieta remained an above average starter and if he does end up pitching in the pitcher-friendly Petco park, he may yet justify being selected as a top-25 SP. But the signs don't point to a return to ace form.

Shaw hit two HR's on Tuesday, and looks to build on a season in which he hit 31 HR's and 34 2B's. Interestingly, Shaw's power breakout in 2017 coincided with a drop in FB% but he also increased his Hard% to 37.1% making the power somewhat sustainable. Even if he doesn't match last year's totals, he should rack up plenty of counting stats hitting in the heart of a potentially improved brewers lineup while contributing a solid BA and a handful of steals. Shaw is a steady if not spectacular fantasy 1B/3B.

Syndergaard struck out 7 in 3.1 scoreless IP on Thursday and looks to be back in ace form for the 2018 season. After missing basically the entire last season, some may be concerned about how Thor will bounce back, but right now there doesn't seem to be much reason to doubt that he will return to his top-10 (if not top-5) SP status. Unfortunately, owners won't be getting much of a discount on Syndergaard as he is currently going in about the 3rd round.

Baez left Thursday's game with hamstring tightness although the injury is not considered serious. If he remains healthy, Baez is expected to play a full slate of games this season, which is a good thing because he makes a living from counting stats. His high K% (28.4%) and SwStr% (18.6%) make his .273 BA from 2017 a best case scenario and one that could easily be a lot worse. On the other hand, he does have decent power and speed, as witnessed by 23 HR's and 10 SB's last year, numbers which should be repeatable. But is that worth the BA risk?