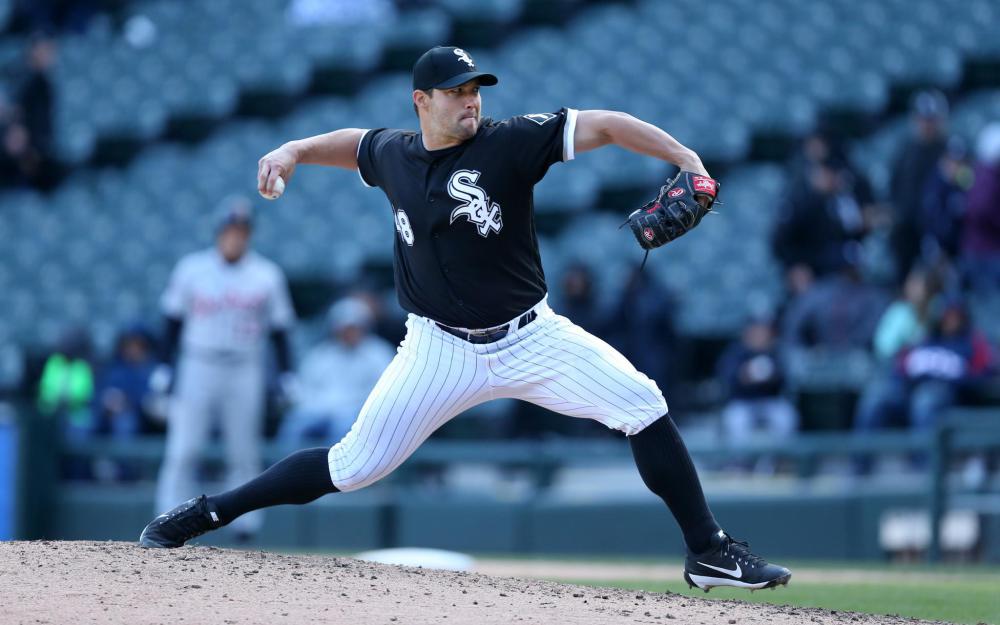 -Aroldis Chapman pitched one inning for Double-A Trenton on Friday night and came away with a couple of strikeouts. According to the YES Network, Chapman will rejoin the Yankees this weekend and will be available for Sunday's game.

-Cam Bedrosian is expecting to be activated from the disabled list on Saturday. In his absence, Bud Norris has been very good and it would be surprising if Norris didn't hold on to the job. Norris is allowing hard contact just 28% of the time and his 30% strikeout rate is excellent. His 10% walk rate can be troubling at times, but with a 45% groundball rate and solid defense behind him, he has managed to stay out of trouble. Bedrosian likely won't be anything other than a set-up man for the foreseeable future.

-Justin Wilson has only appeared in 5 games this month and he's allowed 5 walks and 4 hits in those appearances. Knowing this, it shouldn't come to anyone's surprise that former closer (and seemingly ageless wonder) Francisco Rodriguez is quietly working his way back into higher leverage situations. Unfortunately for K-Rod, he coughed up a 1-run lead on Thursday night while pitching in the 8th inning. Add this outing to Rodriguez's critical comments regarding his team, manager and others on Monday, and it doesn't seem likely that Brad Ausmus will make a permanent change in the near future. Wilson remains the one to own in this bullpen, so don't pay too much attention to the other narratives floating around.

-Seung Hwan Oh gave up a 2-run home run in a tied game in the 9th inning on Thursday. This came on the heals of another rough outing on Sunday where he allowed 2 earned runs on 4 hits. Oh has now allowed at least one baserunner in 12 of his last 13 appearances. While normally I would be clamoring at the door for the Cardinals to insert Rosenthal into the role, I'm not sure that's the best move right now. The strikeouts have been there for Rosenthal, there's no questioning that, but since the calendar has turned to June, Rosenthal has an 8.44 ERA, a 1.69 WHIP and a terrible 17% walk rate. Stand pat on Oh right now and keep an eye out for signs of Rosenthal turning things around.

-Santiago Casilla's grasp on the closer role could be in danger. In just his 3rd save opportunity in June, Casilla allowed a double and a game tying single to blow the save. Sean Doolittle was activated from the disabled list earlier this week and has looked really sharp in both of his appearances. Doolittle and Casilla were sharing the closing duties before the former got hurt at the end of April. Look for Doolittle to continue seeing high leverage situations with the potential of winning back the closing job. He's worth a speculative grab in any leagues where saves are at a premium and he's likely available in many leagues.

Tommy Kahnle (CWS) - With Nate Jones suffering another setback, Tommy Kahnle is securely seated as the primarily set-up man for David Robertson in Chicago. Looking at the calendar, we're only about 45 days away from the non-waiver trade deadline on July 31st, meaning the last place White Sox will almost definitely be shopping their high-priced closer, who is in the final year of his contract. Once he gets traded, Tommy Kahnle is the logical next man up for the ChiSox. Kahnle has put together a pretty nice season, particularly when it comes to strikeouts. The right-hander has 46 strikeouts in just 26.2 innings pitched, which is good for a 47% strikeout rate, and it comes paired with a solid 6.4% walk rate. Prior to this season, Kahnle has historically posted strikeout rates around 25% and walk rates well above 13%. To see this type of improvement over the course of one year is rare and it's something that's worth looking into a little more closely. One of the things my partner, Lou Blasi, on our Sirius XM loves to ask is "what changed?" Kahne has 3 pitches, the fastball, slider and change-up, although he primarily throws the fastball and slider. Historically, his change-up has been his out pitch and it's the pitch that has had the most effectiveness. That pitch remains strong this year, but he has also made tremendous gains with his fastball. Gaining nearly 2 MPH of velocity on the pitch this season, Kahnle is getting whiffs on the pitch 16.5% of the time, up from 10% in 2016 and 8% in 2015. It's an incredible turnaround for a guy who was designated for assignment by the Rockies in 2015 and didn't even break camp with the White Sox on Opening Day this year. If you're looking for possible downsides, it's worth mentioning that his new repertoire is inducing more flyballs than he has usually given up (28% to 37% this year with a corresponding drop in groundball rate). Anytime you see a pitcher throw as hard as Kahnle, the fewer flyballs the better. Along with that thought, it does also seem like Kahnle has Lady Luck on his side so far in 2017, posting an unsustainable 93% strand rate. Even after you take into account the higher strand rate, Kahnle's 94% strand rate remains way too high for anyone to maintain, so look for his ratios to start regressing slightly. Still, there aren't too many other non-closing relievers that I'd want to own as much as I want to own this guy. Stash him now before Robertson gets dealt and his price goes up.