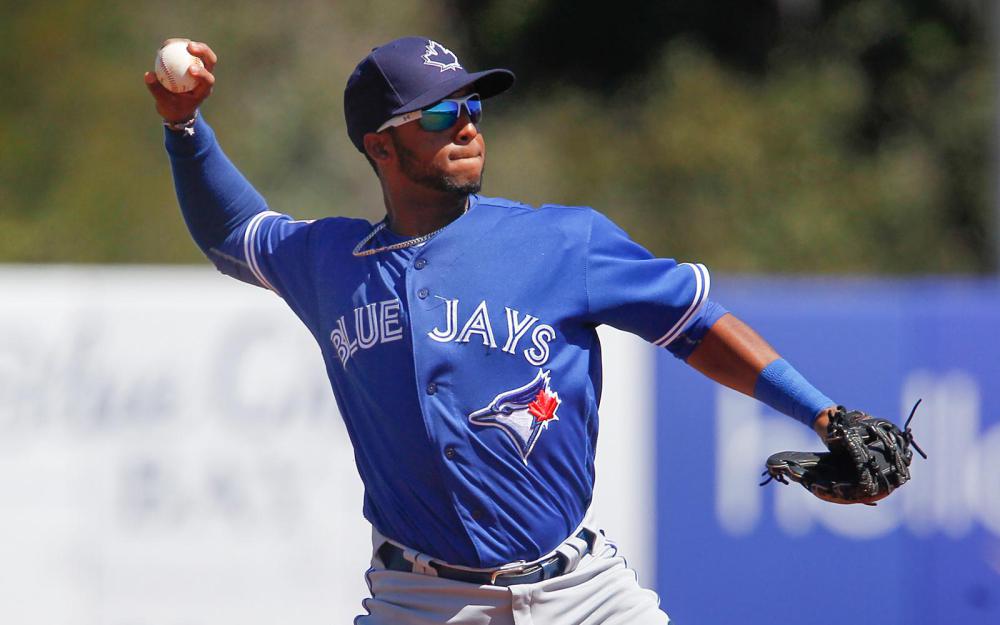 Robinson Chirinos (C) TEX - Maybe we shouldn't be quite so surprised by the emergence of the 33 year old Chirinos in Texas. The long-time minor leaguer (he didn't surpass 100 major league ABs until his 9th professional season) had some very solid performances in the minors, although he was typically old for the level of competition. Instead of wilting with increased playing time after the trade of Lucroy, Chirinos has been even better, going 30-82 since August 1st with 7 doubles, 5 homers, and a BB:K ratio of 20:17. His above average bat speed combined with a massive amount of flyballs should continue to result in very solid power numbers, and I've been extremely impressed by his improved contact rate with more playing time. Yes, the BABIP is definitely higher than expected, so the AVG probably won't continue to be so much of a help, but if these improvements stick he should remain in the discussion as a legitimate #1 C in standard leagues going forward. (currently #11) I certainly have no problem with him for the remainder of 2017.

Marwin Gonzalez (everywhere but C) HOU - Marwin Gonzalez has been one of the most valuable players in fantasy baseball this year, hitting .295 with 21 HR and 7 SB with eligibility at every position but C. Though it may seem like he's been around forever, Gonzalez is in the middle of his prime at age 28, and the progress that he's made in both the short-term and intermediate-term is impressive. Gonzalez has slowly improved both his flyball rate and his hard contact rate over the past 5 years, increasing both by close to 10% over that span. It was enough to make him a modestly useful player, but this year's improvement in chase rate and a reversion to the better contact rates of his early years have pushed him near the star level. Because of Houston's depth he will likely get a few more days off than your average player of this caliber, but I see no reason to expect Gonzalez to fade either down the stretch or in 2018...the improvement appears to be legitimate.

Matt Olson (1B/OF) OAK - No one is hotter than Olson right now, who completed a Sunday to Sunday stretch with 6 homers among his 12 hits. He's 8th in average exit velocity right now, and the questions about the hit tool are fading a bit as he's shown a bit better contact ability than was feared in addition to a fairly advanced understanding of the strike zone. Olson is playing every day now (no longer platooning), and should continue to be an excellent source of power down the stretch. Longer-term, the improving offense will help his status a bit, and I think there's a chance that he could provide solid standard-league value as a CI right now.

Yandy Diaz (3B) CLE - Diaz is a guy that I definitely have my eye on. Diaz defected from Cuba at 22 years of age, so he's only been stateside here for 4 professional seasons now. The minor league numbers show no power and little speed, but I think it's important to realize that this is a question of approach rather than raw ability. The things that jump out about Diaz: #2 in average exit velocity, hard contact of close to 40%, unbelievably low chase rate of 14%, excellent contact rates in the mid-80's......and a flyball rate below 20%. That's keeping his value down for now, and it could remain that way in perpetuity, but if anyone drags Diaz along for the flyball revolution that we're experiencing, this kid could be a monster. I like the idea of taking a flyer on him in deeper leagues already, and I'd certainly be monitoring his progress in all formats.

Jordan Montgomery (SP) NYY - Montgomery failed to make it past the 5th for the 6th time in his last 7 outings, with continued spotty control being the primary culprit. There is quite a bit of potential here longer-term, and I think it's possible that he could be a top-50 SP next season (he's #58 now, for that matter), but with a career-high in innings and counting, I don't see much impact from him the last few weeks. I love the chase rate and swinging strike%, and the 2.76 BB/9 in the first half is certainly a manageable figure, but I can see the Yanks being cautious here, and when combined with the degradation in control over the last few months I think there's quite a bit of risk here short-term.

Richard Urena (SS) TOR - Urena is a 21 year old SS that's hitting at the top of the Blue Jay lineup and playing SS almost every day over the past week. He's hitting 280/379/440 through his first 25 ABs, and although his minor league numbers haven't been stellar, there are a lot of tools here. I wouldn't expect a lot of base-stealing although he does have good speed, but the contact ability, strike zone judgment, and power all seem to project to at least average. I think he's a sneaky MIF add for the last 3 weeks, and depending on winter roster movement he may merit a look next spring.