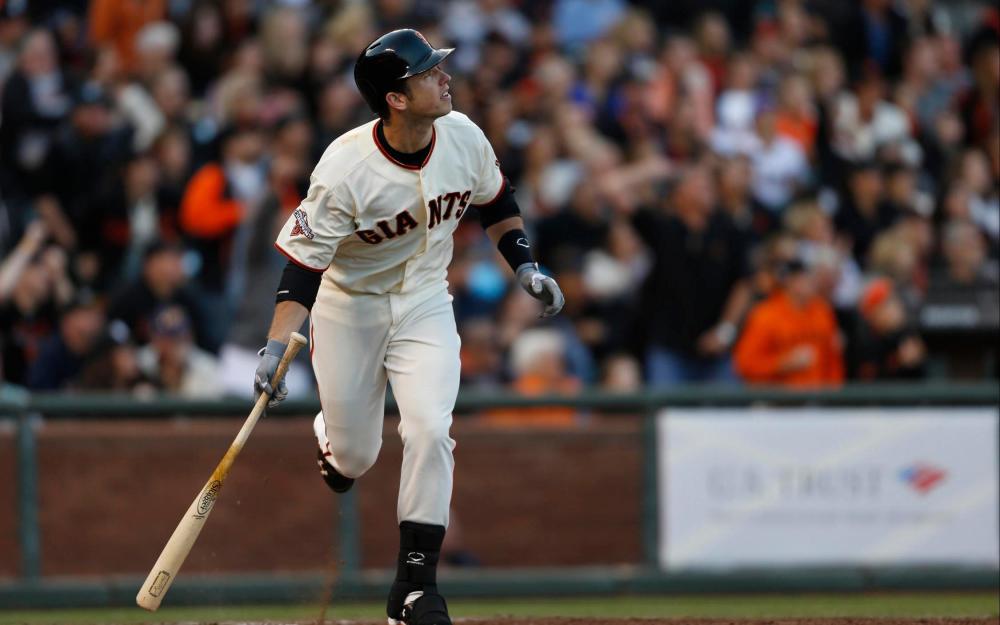 Scooter Gennett (2B) CIN - Gennett picked up RBI number 96 Thursday as he continued his career year, but I don't think a complete collapse is in order. Gennett's second-half line of 285/329/485 isn't all that much different from his career line of 297/337/474 against RHP....he's just hit far better against LHP this season than he normally does. Add in that he's 27, and you've got a career year. I see no reason to think that he won't hit for a solid AVG with some power once again in 2018....the level of power is the issue. Gennett isn't really hitting the ball any harder than last year, as the average HR distance is virtually identical. The hard contact rate is up 6% and the flyball rate is up 2.5%, and that's pretty much the difference. If you subscribe to the theory (as I do) that the bit of regression that we've seen in the second half is more the player that he's likely to be going forward, then I still believe that he's likely to hit around 20 HRs in 2018, and a player in a decent offense that could hit 20 HR with a solid AVG is a worthwhile 2B to own. He's ranked #8 at 2B this season, but I'd probably "pre-rank" him between 10-12 heading into next season, accounting for a less than ridiculous first half performance.

Chad Kuhl (SP) PIT - Kuhl is a name I'm keeping in the back of my mind for 2018, as he's made some solid progress in the latter stages of 2017. Yes, there are plenty of warts here, but he's figured out how to miss bats with his very good raw stuff, and that's a big first step. The 3.63 second half ERA is a bit misleading, as the FIP ERA is still 4.24, but he fanned over a batter per inning in the second half and almost 10 per 9 in September. For me, he's a solid late-game flyer in deeper leagues come March.

Dillon Peters (SP) MIA - Peters is another arm to watch in the late rounds come spring. He allowed 2 hits to the Braves on Thursday over 5 2/3 shutout innings, walking 4 and fanning 4. The control has been an issue in the majors, but since it never has before this I'd imagine that he's just nibbling a bit too much. His curveball has been very good, the GB rate is fantastic, and he's been missing bats at roughly a league average rate. With a minor league ERA of 2.39 and a WHIP of 1.10, I think there's some sizable upside here.....his 5'9" height might have caused some to be overly pessimistic about his prospects.

Paul DeJong (2B/SS) STL - DeJong just missed sending the elimination game for the Cardinals into extra-innings Thursday, as Leonys Martin robbed him at the CF wall for the final out of the game. DeJong has had a monster year, hitting 34 doubles and 37 homers between AAA and the majors while providing eligibility at both infield spots....yet I believe that he'll be overvalued come spring. DeJong has managed this fantastic line with a below average exit velocity, below average chase rate, and below average contact rate. He hits a ton of flyballs (over 43%) and his hard contact rate is very good at over 35%, but I still believe his 2nd half line of 268/318/489 is a much better barometer of what to expect from him going forward than the full-season numbers. That's still a solid player to be sure, but I'm betting that's not what people will be paying for. Be cautious here come spring.

Buster Posey (C) SF - Is Buster Posey turning into Joe Mauer? I think it's a fair question, although as good as Mauer has been at times in his career, Posey has been a superior player. Posey is in the third straight year of an ISO decline, and he's really cratered in the second half with a 300/379/386 line and only 2 homers. Much like Mauer, the bat speed is still there (Mauer is actually 35th in exit velocity, Posey is 113th, which is still well above average and percentage points behind 112th place Mike Trout), but with a 50% GB rate in the second half, it's just being beaten into the ground. A similar thing happened to Mauer around the same age, although again, it's not an apples-to-apples comparison because Mauer was never quite the power hitter that Posey was despite a bit more bat speed. Catching is pretty brutal on these players physically, and there aren't a whole lot of guys that handle a full workload well into their 30's (Posey will turn 31 just before the regular season starts in 2018)...those that do typically broke in as catchers a bit later, like Jorge Posada. Sure, there are outliers like Fisk, Rodriguez, and Yadier Molina, but there's a reason you can think of their names....it isn't all that common. Even Yadi has really only had one good season since turning 31, although this year has been very solid, and a HOFer like Johnny Bench was basically done being productive at 32. The moral of the story here with Posey is: don't pay for past performance. He's already been passed for the top catching spot from a fantasy perspective, and while there's every chance that he remains reasonably productive, the smart money is on a decline for as long as he's catching. To paraphrase Branch Rickey, I'd rather not draft a guy a year too early than a year too late.