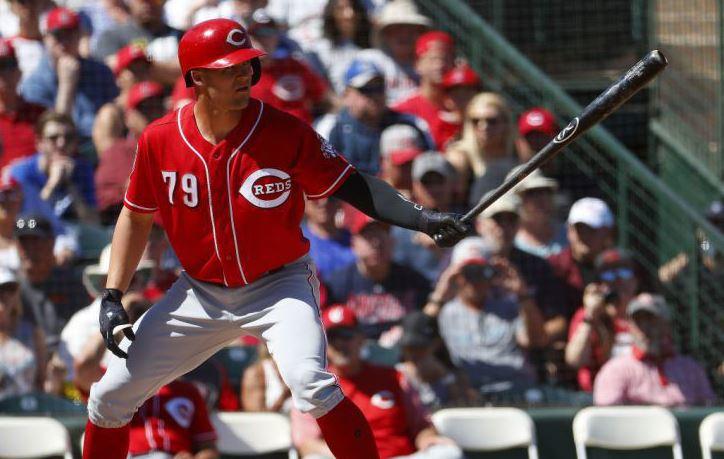 Reds' manager Bryan Price was prophetic this spring when he assigned Nick Senzel to minor league camp in mid-march, telling him that he needed to be able to play anywhere but first base for the big club in case someone went down. Well, Eugenio Suarez is down with a fractured thumb and as of Tuesday night, Nick was starting at third base for AAA Louisville. The Reds had worked him out at second, third and even SS during spring training so it appears that Nick is probably going to be called up soon to fill in for Suarez.

The 22-year-old was the Reds first pick and the second overall pick in the 2016 June draft. The 6-1/205 RHH handled his first taste of the high minors last year very well hitting .340 (.391 BABIP) in AA with very good plate rates as you can see below and a tidy 10.3% SwStr rate. All this while dealing with vertigo for part of the year. In a very small sample this year, he's had more of a battle at AAA and now he has a defensive conversion to deal with that is now more need than theory.

Nick was drafted out of college as a nearly complete player and he was skilled enough at the time to simply take on MLB pitching and acclimate at that level. He's done nothing to dissuade me of that opinion in his 2+ years as a pro. He has an excellent approach and strong contact skills. There's a lot to like here, Nick is solid as hell as a prospect. The only issue, if I am going to nitpick here is that I am not sure he's going to be a headliner in terms of anything.

He'll chip in some steals early in his career, and he'll have enough power to play anywhere including third base. He'll hit for AVG and be a plus in that category as well. I guess it comes down to power. He's a 20-HR guy but who knows, I might be a 20-HR guy in MLB in 2018. I am anxious to get Hard%, Exit Velo, and Launch Angle data on Nick to try and get an idea of what his raw power ceiling is because he's a good enough hitter to turn it all into game power. He started that conversion in AA last year.

For now, when this call-up happens, perhaps early this week, Nick is more than rosterable and should be a contributor out of the box. Go get him. Hopefully, he maintains a 2B qualification in addition to his 3B qualification. Don't wait. Do it now. In the long term, he's a very good hitter whose final grade will be determined by his power ceiling. I know people love comps. I do too. I just don't like originating the comp. But maybe Nick's comp here is Alex Bregman, with less speed.

Last we saw Jack Flaherty he was shutting down the Brewers on April 3rd (1 run, 6 hits, 1 walk, 9K), standing in for Adam Wainwright, who missed his start with a hamstring. Jack was optioned to Memphis (If you have to be optioned ... I'm just sayin' ...) and fanned 11 in his first AAA start of the year. His taste of the majors last year didn't seem to go all that well if you stop at the stat line below, but he gave up 9 earned in 9 IP between his first and last start of those 5 starts in 6 appearances. In between, he allowed 1 run to the Padres over 5 IP despite 4 walks, 3 runs to the Reds over 4 IP and then 2 runs to the Reds again over 2 IP ... Six runs over 11 IP (4.90), 10 hits, 7 walks, 9 Ks) ... So still not eye-popping, and a criminally small sample for a 21-year-old making his first 6 appearances in the big leagues, but less distasteful than his overall line.

Jack was a first round pick in 2014, 34th overall. He's a 6-4/205 RHP. If it weren't for Alex Reyes, he'd be the best SP prospect in the Cards' system. He's a perfect fit for that system, too. He has a skillset and baseball smarts and the Cards will polish him into a good MLB pitcher. In fact, I would be much more willing to write Jack off as a good #4 guy if he were in a lesser developmental system. And the way he marched through AA and AAA last year gets my attention too. The question is whether Jack can rise to be more than the sum of his parts.

Those parts are a low-to-mid fastball, a plus slider (-8 mph), good curve (-15) and usable change (just -5) ... They are 4 MLB-ready pitches. The problem is that Jack just doesn't beat hitters enough. He doesn't have elite velo or life on his fastball, his velocity deltas are not compelling through his menu, and his command on all of his pitches is less than it needs to be to make his stuff play up. That's the ingredient he needs. Something to make all of his stuff play up. I don't think the change is going to be it. His slider is good but isn't going to scare anyone. I think he needs to top out his command capability and be a craftsman.

Everything is close. His SwStr rates in AAA last year dipped below 10% at 9.4, but they were 16.5% in his first AAA start, 15.4% in his start on April 3rd and 13.1% in his time with the Cardinals last year. That's the rate I'll be watching this year. Overall so far there seems to be a little sorcery going on with Jack and he pitches better than what I see in his stuff. Not to say that he has the ceiling of a #1 or #2, I don't believe that. But if he finds something that helps him beat hitters at a higher rate he could be a good #3 ... As it stands I see him more as a good #4.

Willy Adames was part of the Rays' return in the deal that sent David Price to Detroit. He has been a solid citizen in the Rays system, dutifully advancing a level each season with little regard to the age curve. Willy hit the high minors as a 20-year-old in 2016 and held his own posting a 9.8% SwStr rate with good approach numbers.

Last year, as a 21-year-old in his first tour of AAA Willy held his own in the jump, posting a very similar season to 2016. He's a steady hitter and he would be projectable as a quality major leaguer if he were 23 or 24, but he's not, and his youth teases you with some growth potential.

I am concerned about two things. First, I am not seeing any game power growth at this point, and as a result, I am worried about his K rates because he's going to need to be more of an OBP type of contributor if he can't approach 20 HRs at his peak. I am not quite ready to give up on that because as we all know everyone seems to be doing that, and at 6-0/200 he should be able to produce enough raw power. The Rays may also be focusing his approach on contact after getting spooked with a 28.3% SwStr% in his first year after the trade. Willy is running out of runway on physical development but once he gets established he may take the old school route and show his game power late.

There will be an opportunity for Willy with the big club sometime in 2018, probably not too terribly far down the road and he projects to be a pretty good offensive contributor across the board. Still, he won't do anything exceptionally well. His ceiling right now looks something like 15/10 with a league level (or a hair worse) AVG. I think he still has some gains to make in contact which will make him a better OBP contributor.

Power? Maybe. It wouldn't take much to make him an 18-20/15, but I think contact will be his focus for a while so the game power may not show up for a year or more. The Rays have a solid player and an eventual 20/15 season is not out of the question, but that's a ceiling a think, and I don't think he performs at that rate in 2018.