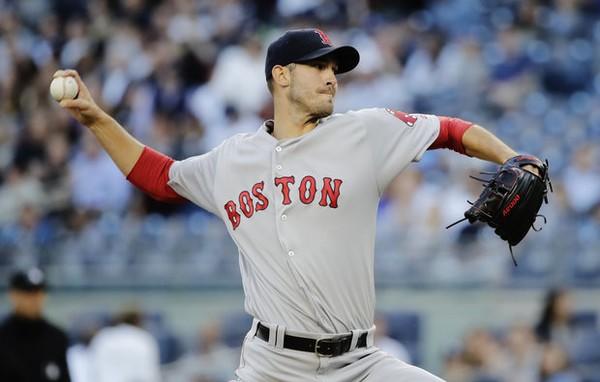 Willy Adames (SS-TB): Adames has been solid at Triple-A, and is likely to take over at SS by the end of the month. He is sitting at .298-.404-.500 with three homers and two steals through 24 games with a solid 16:21 BB:K ratio. The improvements he has made in the contact and plate discipline departments are impressive, and while he has not displayed a ton of in-game power, he is likely to grow into 15-20 homers annually. Adeiny Hecchavaria is an offensive liability, so look for the Rays to go with the youth movement by May's end. Jumping on Adames now where available can save you precious dollars.

Rick Porcello(SP-BOS): Porcello won after allowing one run on three hits (one homer) and one walk with eight strikeouts over six innings. The veteran right-hander is off to a fast start, carrying a 46:5 K:BB ratio and a 2.14 ERA through five starts. While he has been fortunate with a .252 BABIP and a 4.8 percent HR-FB rate, Porcello also looks to have made some tweaks, specifically in his pitch deployment--his fastball usage is down 10 percent, his curveball usage is down six percent, and his slider and changeup percentages are up eight percent from last season. Given the precipitous drop in his hard hit rate so far, I think the gains are for real.

Nomar Mazara(OF-TEX): Mazara hit his seventh homer of the season, a solo shot off of Rick Porcello. Mazara is on pace to eclipse 30 homers and post a .504 slugging percentage, but the peripherals don't fully back up the power surge. While his hard hit rate is up four-percentage points from last year, that mark--along with his mediocre exit velocity numbers from Statcast--don't support the 12-percentage point elevation in his HR-FB rate. Add in the uptick in the groundball rate, and I envision him in the 20-25 HR range by season's end. He's growing as a hitter, but don't overpay for the power.

Jose Berrios(SP-MIN): Berrios allowed four runs on six hits (two homers) and two walks with two strikeouts over six innings against the White Sox. Berrios has allowed 18 total runs in four starts and zero total runs in his other three starts, so volatility is frustrating for fantasy owners. However, Berrios has been limited by a 67 percent strand rate and an elevated HR-FB rate despite a stellar 25 percent hard hit rate allowed. The fact that he continues to keep the free passes in check gives me further confidence that he's going to deliver solid value throughout the season. Patience.

Daniel Palka(OF-CHW): Palka ($3600) at home vs. the Twins looks like solid play on DraftKings today. Lance Lynn's struggles against LHH's continue, as the former Cardinal has allowed a .491 wOBA against them so far this year after allowing a .349 mark last season. Palka, who has received the bulk of the at-bats in right field with injuries befalling the Sox, has hit .318 vs. RHP with two homers in 22 at-bats while showing excellent contact skills and plate coverage. The ingredients are here for a big day for the White Sox bats, especially towards the bottom of the lineup.