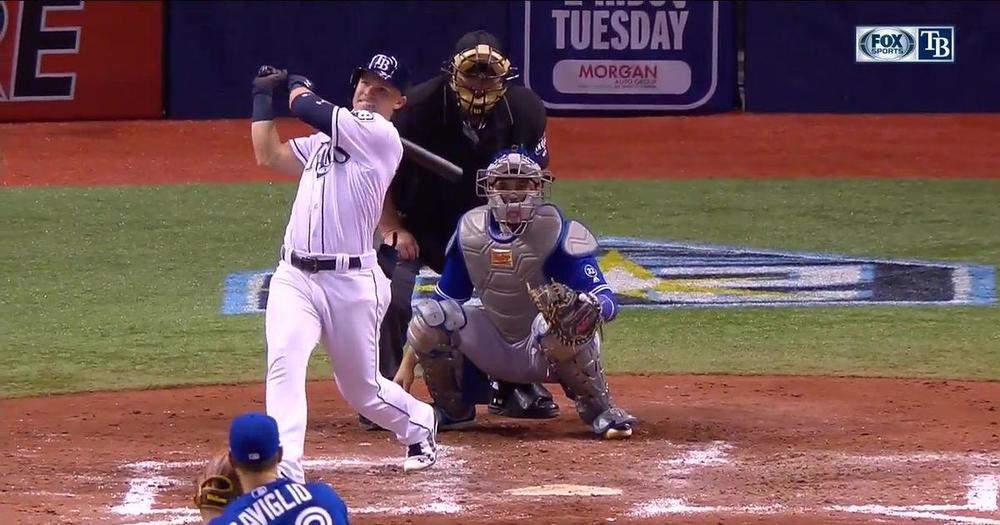 Brad Miller's DFA in Tampa opened a lineup slot for Jake Bauers this week and he was recalled on Thursday, debuting with an 0-for -4 with a K. The 22-year-old LHH was a 12th round pick by the Padres in 2013, and that tells you a story that his pro career has only verified as it has unfolded. Guys drafted in the 12th round usually have some baseball skills, in this case, Jake's hit tool which includes solid contact capability and a, well, solid plate approach. He's posted sub-10% SwStr rates throughout the high minors, he's willing to take a walk, and he produces a, here we are again, solid LD%.

Players drafted in the 12th round usually have some deficiencies as well. In Jake's case it's his power ceiling. Jake is athletic which has allowed the Rays to develop him in the outfield in addition to first base where his power may not match the position. He's been playing below the age curve with the Rays and you can almost see his thought process in his box below. He hit AA in 2015 and held his own leading to a, yes, solid campaign in his second tour in 2016 in which his plate rates nearly leveled out and he showed a little pop. That got him to AAA last year where he tried to bring more game power to the table without trading off contact. This year in AAA he decided to be a bit more aggressive and force the issue of his promotion (note the SwStr% and his 50.3% Pull%, up from 45.8% and 44.4% the previous two years) but signing up for a little more of that tradeoff of contact. He indeed gave up some contact, but didn't really gain much power in return. Of course, we are looking at April/May numbers here and it hasn't been the kind of spring where the ball would be jumping in Durham. At 6-1/195 and at 22-years-old, there's still some raw power left to find as he continues to fill out and Jake may have to depend on that to up his game power game because despite what seems to be some approach adjustments, he's not seeing much of an increase in results in that area.

That makes his value at 1B questionable in the long run, but fortunately he plays the outfield and fortunately there's a prize in the bottom of his cereal bag in the form of a little bit of a speed game, nothing outlandish mind you, but still. It's also a baseball speed game, it's not based on raw physical speed, so a good percentage of it may port to the big leagues, at least for a while.

If you look at the peak of his ceiling, add a copula, and a weathervane featuring a tall rooster on top of that, and put on your rose-colored glasses (and squint), you may be able to visualize a 20/20 season, but a 20/13 season is more likely with full-time play. That's useful as an OF, less so as a 1B. Still, he's pretty projectable as a decent MLB OF, I just don't see a lot of "wow" in his future. He'll be an OBP contributor as well, but his speed game will likely evaporate within a few years. But if that small speed game moves him near the top of the order (he batted 6th in his debut) he'll be a contributor in runs as well. The other good news is that his strong approach may allow him to contribute "solidly" right out of the box.

I need a National League prospect this week and I haven't touched on Fernando Tatis Jr. this year. Here's what I wrote about him in Week #19 last year:

I loved his Dad. His Dad was one of those players I latched onto early and rode until the whimper of his ending, feasting all the while on the memory of 1999 and what it promised, but failed to deliver ... But I digress ... The kid may be better.

The 18-year-old, 6-3/185, RHH SS is having a year in high-A already flashing game power and the power/speed combination of skills his father promised.

Tatis was originally signed by the White Sox but traded to the Padres in the James Shields trade before the White Sox got a look at him in their uniform. We talk about that power/speed combo a lot but there is more at play here with Tatis. In addition to those skills, Fernando already shows a strong and advanced plate approach with an acceptable K rate in light of his power and a desirable walk rate in light of his speed game. In addition to that Tatis has the build, athleticism, and arm to stay at SS even as he physically matures.

We are, of course working with 400+ High-A ABs of data from an 18-year-old, so there's a way to go here and we have to calm ourselves until we see him get challenged in the high minors. That's fine, a very reasoned approach ... You are going to have to get in on him now if he is still available. His name recognition, his performance this year and his arrival in AA next year will all conspire to out him soon enough. Good looking kid. Pull the trigger. I love his upside, especially at his position.

Fernando hit AA not too long after that for 55 adjustment ABs which were a bit of a struggle as you can see below. He's come back to AA as a 19-year-old this year (and he won't be 20 until January) and he's back at it, with just a little slippage in his plate rates, which understandable, and those rates will likely improve from here. He's not walking or running as much, but again he's young, the high-minors is a pretty significant jump, and while we can be a Jr. too, we can't all be Vlad Jr.s. Give the kid some time.

I think he has more to do in the minors and certainly in AA. I'd like to see his speed game return more fully, and I'd like to see that walk rate continue to inch up, although that 14.5% he posted in A-ball in 2017 is an unrealistic standard, I think. Let's see where we are at the Futures Game in a month and track him through July. I don't see him as a big 2018 factor, but who knows? Still, the key question here is, how do you like the sound of a 20/20 MI?