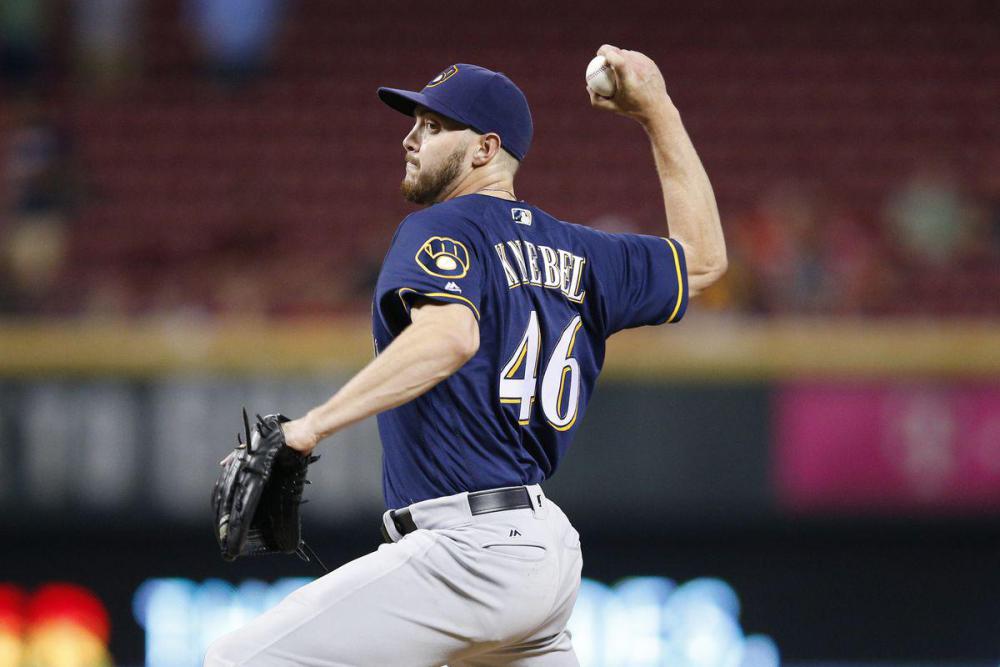 Corey Knebel (RP-MIL) - Knebel's grasp on the Milwaukee closer job became more tenuous against the Padres on Thursday. Entering with a 4-2 lead in the 9th, Knebel allowed an infield single to the first batter before walking the next three and finding himself removed in favor of Joakim Soria. Soria promptly allowed a Hunter Renfroe grand slam to further degrade Knebel's ERA, which now sits at 4.79 despite a reasonable 50:18 K:BB in 35.2 innings. Knebel had allowed just one run in five innings in August after posting a 5.25 ERA in July, so maybe we don't quite close the door on Knebel as closer. It's possible though, leaving Soria and Jeremy Jeffress as Plan B's. It seems Jeffress is the best option given he's been working as the primary setup man and has a 1.29 ERA. Update: Knebel will be used in an "easier spot" next time according to manager Craig Counsell. Don't drop him, but grab Jeffress.

Brian Dozier (2B-LAD) - Upon acquiring Dozier at the July 31 trade deadline, manager Dave Roberts hinted that Dozier wouldn't play every day, likely sitting against some tough right-handers and even the occasional southpaw. Maybe that's changed, as after going 1-for-5 with a two-run homer Thursday, Dozier is batting a robust .308/.438/.769 with three homers in eight games. He's sat just once in nine games since the deadline, so it's fairly safe to say that he'll play at least 5-6 days a week with one day off. Even on that day off, don't be surprised to see him come in late in the game and pinch-hit. Dozier overall this year is batting just .229/.314/.424, but most fantasy owners are aware of his first/second half splits. From 2015-2017, Dozer's second half OPS is 85 points higher than his first half mark, and he's well on the way to widening that in 2018. Look for him to be a top 2 or 3 fantasy second baseman the rest of the way.

Ross Stripling (SP-LAD) - Stripling made his return from the DL Thursday in a tough spot, Coors Field. With that, the Dodgers are more than pleased with the result - 6 IP, 4 H, 1 ER, 2 BB, 2 K. The strikeout total wasn't there Thursday, but Stripling lowered his ERA to 2.62, and in 110 innings, he's put up a "Kershaw in his prime" K:BB of 121:17, so don't worry about the two strikeouts. Stripling needed this one to cement his rotation spot, as the competition is fierce, and about to get more fierce with Hyun-Jin Ryu nearing a return from a groin injury. Also, in Stripling's two previous starts, he had given up nine runs in just 8.2 innings, including four long balls. His rotation spot is safe for the time being.

David Dahl (OF-COL) - We haven't talked about Dahl for a while, but in case you missed it, he's actually healthy and playing a lot in Colorado. Dahl was 1-for-3 with a walk on Thursday and is now hitting a decent .283/.330/.500. We had thought Dahl would be the team's fourth outfielder, but he's started each of the last four games, going 5-for-17 with a couple walks, a homer, a stolen base, and just two strikeouts. Gerardo Parra looks to be the odd man out right now, as he's been on the bench for three of the last five games and is in a 1-for-17 skid (.217 over his last 83 at-bats). Dahl of course comes with a lot of hype and a lengthy medical chart, but he's a career .305/.348/502 hitter in the big leagues who can put up double-digit stolen bases. He might be available in 12-team mixed leagues and could be a nice pickup this week.

Wade Davis (RP-COL) - The last time we did a Davis update, we concluded the blurb with "no need to panic if you own him". Well, let's just say this now, "time to panic if you own him and time to look at Colorado's Plan B". Davis was pounded by the Dodgers for three runs in a third of an inning Thursday, including home runs from Chris Taylor and Brian Dozer, both right-handed hitters who he wasn't fooling a bit. Davis saw his ERA rise from 4.98 to 5.51, and in his last four appearances covering 2.1 innings, Davis has allowed seven runs on three homers while blowing two saves and losing three games to drop to 1-6. Safe to say that given his $17+ million annual salary, that Davis will clear waivers this month and go unclaimed. Davis does have 32 saves and a 10.1 K/9, but his control is poor (4.6 BB/9) and he's lost some on his fastball for the third straight year. Given his saves total and salary, it's possible he'll get some more rope, but I'd grab Adam Ottavino (1.63 ERA, 81 K) if you're speculating on saves.