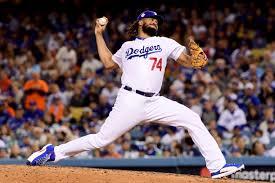 Welcome back everyone! Even though Week 1 of the NFL pre-season is behind us, you're still sticking around to read an article about closers. That means you must be in contention and hoping to discover the next piece to push you over the top. We're almost there! The week after the trade deadline always feels like a hangover week and that's especially true for this season after the flurry of moves that happened about a week and a half ago. Luckily, that's been enough time to provide a little more clarity on some of the situations as well as allow for new issues to pop up. This coming week is also bringing an opportunity for the two most dominant set-up men in baseball to finally get a crack at the ninth inning. Without further adieu, let's hit it!

-The Dodgers and fantasy owners took a huge blow to their playoff aspirations on Friday as Kenley Jansen landed on the disabled list with an irregular heartbeat. It's related to the same issue that required surgery in 2011 & 2012. It's being estimated that he'll be out about a month (according to Buster Olney's sources), which should cause fantasy owners in single-season leagues to seriously question where he's going to be worth owning the rest of the way. If you have a disabled list spot open, it's probably worth slotting him in there, otherwise it might be the right call to move on. Scott Alexander got the first save opportunity on Thursday and figures to be the front runner. He's a must-own in all formats the rest of the season and profiles as an average skillset with below average walk and strikeout rates, but an excellent 71% groundball rate that keeps him out of trouble.

-The Nationals bullpen was dealt another blow this week after Kelvin Herrera hit the disabled list with a shoulder impingement. For now, Ryan Madson will man the ninth inning for the Nationals until either Herrera or Sean Doolittle (foot) return from the disabled list. It is worth mentioning that the Nationals scooped up former Cardinals closer Greg Holland after the team released him a couple weeks ago. Madson, however, has been pitching very well after hitting a rough patch in June/July. Unfortunately, Madson didn't look so sharp on Thursday when he was called upon to protect a 4-run lead in the 9th inning against the Braves. After allowing back-to-back singles to start the inning, Nats manager Dave Martinez called on the 'pen to get Koda Glover and Matt Grace warming up. Madson eventually got out of it, but not before allowing a sac fly that allowed a run to score. The maneuver does give us an idea about the hierarchy, however, so Justin Miller and Koda Glover should be considered the immediate handcuffs to Madson for now.

- If for some reason Brad Hand was dropped in your league, he needs to be scooped up immediately. Cody Allen blew his third save of the season earlier this week and has a 6.00 ERA and 5.81 xFIP along with just a 22% GB rate, 47% hard hit rate, and 9% strikeout-walk rate since July 1st. With Andrew Miller back for the Indians, it frees up Francona to be a bit more flexible in the 9th inning with his reliever deployment, potentially creating an opportunity for Hand.

-After suffering numerous blown saves, Kyle Barraclough is officially out as the Marlins closer. While manager Don Mattingly stopped short of naming Drew Steckenrider the next guy, he's the obvious choice, in my opinion. Adam Conley could see some work if a situation presents itself with multiple left-handers in an inning, but as we have mentioned the last couple of weeks, Steckenrider has the skillset and profile to be a successful closer. His splits are relatively even when it comes to batting average, but he does give up significantly more power to left-handers. For that reason, it's likely that Mattingly will indeed use a committee, at least at first, before Steckenrider eventually takes the role as the primary guy.

-The Twins traded Fernando Rodney to the Athletics on Thursday. The move opens up the Twins situation for Addison Reed, while Rodney figures to moved into a set-up role with the A's. Ultimately, the Twins will probably utilize a committee until one man runs away with it, but given Reed's previous experience as a closer, he likely is the "favorite". However, he's not the most talented pitcher in the bullpen and has been pretty hittable this season (77% contact rate with a 41% hard hit rate). As a result, Trevor Hildenberger or Taylor Rogers could be in the mix. Another name to keep in mind is former top prospect Trevor May, who has been absolutely dominant since getting called up a few days ago. He's low man on the totem pole, but his raw stuff is probably best in the Twins bullpen.

-Brewers Corey Knebel melted down in the ninth inning again on Thursday and after the game, manager Craig Counsell told reporters "The next time out, we'll give him an easier spot, for sure. But at some point, we're going to try to work to get him back to big spots in the game." The contending Brewers have very little room for error as they currently sit two games back from the Cubs and lead the wild card by a single game. Josh Hader is the front runner to see save chances during Knebel's respite, but don't sleep on Jeremy Jeffress, who has the trust of Counsell and has already seen a couple of save chances over the last several weeks. Owners of Knebel should hold him as long as they have an open roster spot.

-As we've been writing about for weeks, Wade Davis remains squarely on the hot seat after suffering his sixth loss of the season on Thursday. Like Aroldis Chapman before him, one has to question how much the abuse that Joe Maddon and the Cubs added to his arm last post-season is impacting him this season. Adam Ottavino must be universally owned, if he isn't already, as he stands the best shot at saves if Davis is given a break. There's certainly a chance that Davis can straighten things out, but with a huge decrease to his swinging strike rate (-4%), massive increase to his zone contact rate (+15%), and drop in his chase rate (-3%), it's evident he's not fooling batters in the same fashion. Obviously, a move to Colorado almost always impacts the break on breaking balls (his cutter pitch value has dropped from 2.45 in 2017 to -0.28 in 2018), so it's difficult to say what aspect is due to the environment and what aspect is due to something else like mechanics or injury. Regardless, Ottavino should be owned.

-Ken Giles has now made three appearances for the Toronto Blue Jays and has allowed 7 runs on 8 hits and 1 walk over 3.2 innings pitched. On the positive, he does have 6 strikeouts, but it does seem like he has a way to go before he will be pitching in high leverage situations again.

-The other player in the Giles trade, Roberto Osuna, has kicked off his stint with his new ball club in a much cleaner fashion with a pair of scoreless appearances with just a single hit allowed and no walks.

Want to see the closer rankings and more? Subscribe!