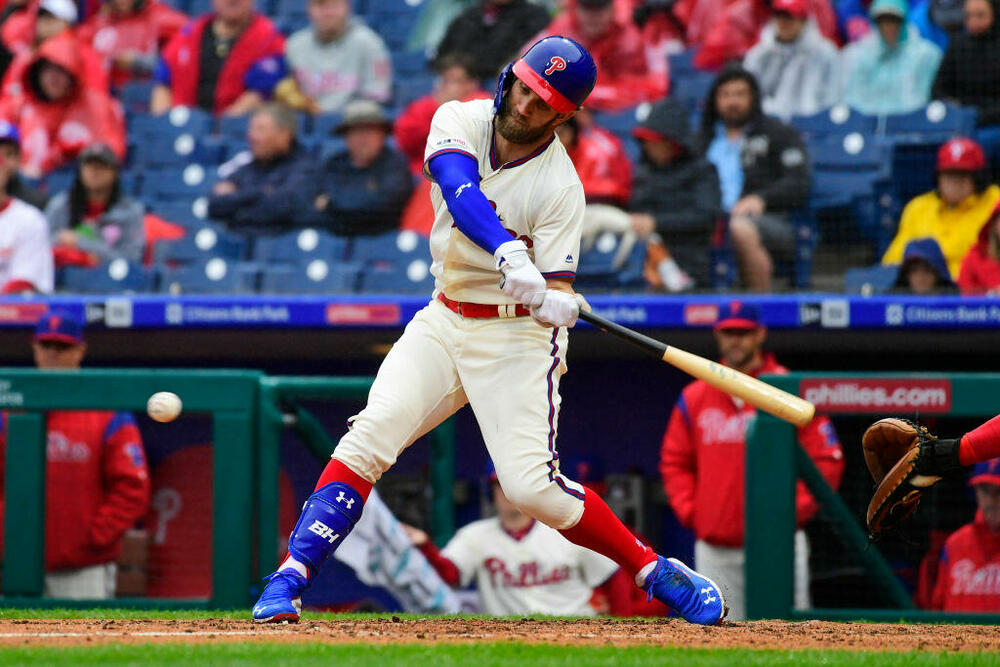 Darvish was solid if not good by Coors Field standards, allowing four runs (two HRs) in six innings. Encouragingly, it was only his third time this season without allowing a walk. Darvish still isn't going deep into games (he reached seven innings only once this season), but since May 9 his xFIP is below 4.00, his swinging strike rate is 13% and his walk rate is still bad but better than it was earlier in the season. He increased the usage of his cutter over 10%. It's the one pitch that has consistently been successful this year (.184 batting average against, 23% swinging strike rate). Fantasy owners are understandably going to be skeptical of Darvish, but if you can buy low from a frustrated owner and accept he's not going to pitch like the 26-year-old Darvish, there are reasons to believe in a productive second half.

In an ominous start to Monday's outing, Eickhoff gave up back-to-back-to-back home runs to Arizona's first three hitters. The home runs kept coming as the Phillies right-hander would surrender two more long balls in the 4th inning. He finished with five home runs allowed, seven runs total and only two strikeouts in 3+ innings. Eickhoff did not allow a home run in his first five appearances. He's allowed 16 in his last six appearances. Although some of that can be attributed to bad luck (nearly 40% HR/FB rate), you could argue that his early-season success was a product of good luck. Home runs have always been a problem for the flyball pitcher so seeing those balls fly out of the park is somewhat expected (although maybe not five in three innings). Eickhoff's spot in the Phillies rotation is no longer a guarantee as Nick Pivetta is back and pitching well and Vince Velasquez is always a threat to return to a starting role. Plus, the team could opt to acquire a starter before the trade deadline. If that happened, Eickhoff is likely the odd man out. If he remains in the rotation, expect a lot of home runs mixed in with occasional gems.

Walker was hitless in five plate appearances on Monday, although he did walk twice and steal his fourth base of the season. Earlier this season, everyone was infatuated with Walker, specifically his near-60% hard hit rate. However, since May 14, his hard hit rate is only 35%. Hence, his ISO is only .133, wOBA is .253. He did reduce his swinging strike rate, but the bottom line is that elite hard contact he exhibited through the first month and a half is clearly unsustainable. So too was the .395 BABIP that contributed to his near-.300 batting average. Walker is capable of hitting 25-30 home runs (he hit 34 between AAA and MLB in 2017), but he is bound to drag you down in other categories. The four stolen bases are nice though, right?

Harper extended his hitting streak to six games, but he still has only two home runs since May 20 and he continues to make contact and a frighteningly poor rate. His contact rate has continued to wallow in the mid to high 60's. Even though his hard hit rate and line drive rate are up, Harper's batting average will continue to drag if he can't make better contact. His swinging strike rate is nearly two percentage points higher than his worst season, his rookie year. Even his walk rate is down. This is a serious problem. Harper's incredible power could manifest into a home run binge at some point, but don't be fooled if that does happen. Don't let it influence your fantasy decisions. Unless he starts showing better plate discipline, the $330 million man will be a very underwhelming fantasy asset.

It was around this time last year when Goldschmidt got hot, erasing a miserable start to the season. On June 10 last year, Goldschmidt was hitting .254 with 12 home runs. Through the first 2+ months of 2019, Goldy is hitting .272 with 12 home runs. But he hasn't gotten hot yet. Will he? His 76% contact rate is right in line with recent seasons. So is his hard hit rate. And his swinging strike rate is only slightly higher than the last two seasons. Last year was such a dichotomy of two extremes. He was ice cold and then red hot. This year it seems like he's going from slightly cold but is on the verge of heating up. The numbers don't imply massive regression, although his career-high chase rate hints at him understandably trying to do too much. It's an unnerving proposition, but Goldschmidt is a prime buy-low candidate. For the second straight year.