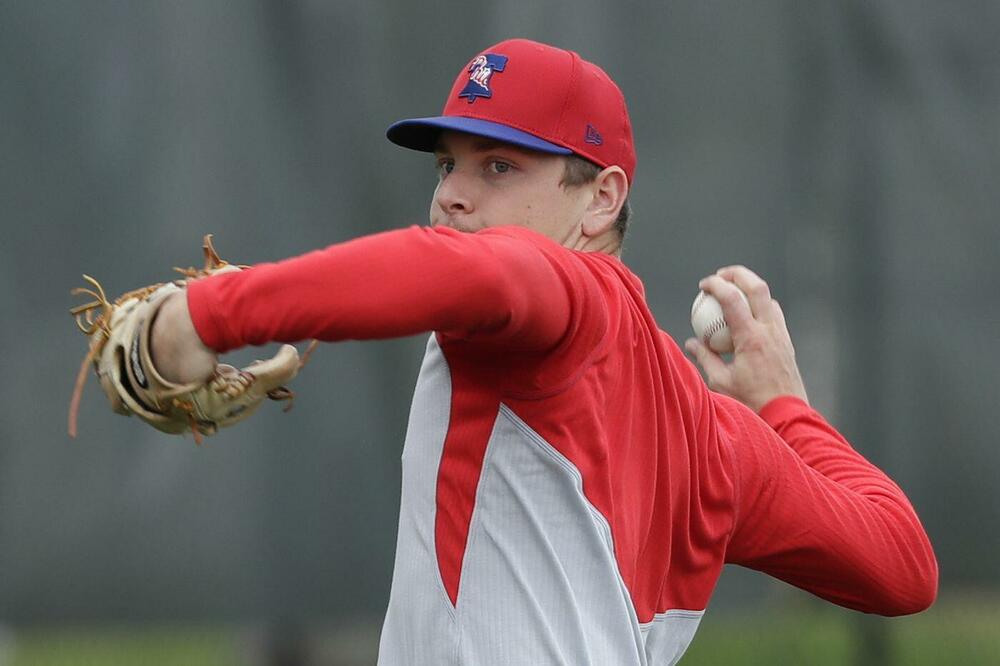 Spenser Howard's much-anticipated major league debut was delayed by COVID cancellations and then helped by Tropical Storm Isaias which set up a doubleheader for the Phillies today. Howard is set to start one end of today's slate.

The 23-year-old right-hander had a pretty impressive high-minors debut last year going 2.35/0.95 over 30.2 IP in 6 AA starts. He posted a 31.1% K rate in his first look at advanced hitting with a 14.4% SwStr%. That came after he had recovered from shoulder issues which cost him a little over two months of the 2019 season, limiting him to 99+ IP last year (including the AFL) after 112 in 2018. And that all came before an impressive Eastern League playoff start - 1 run, 2 hits, 2 walks, and oh by the way, 12Ks over 7 IP. In this 60-game slate the Phillies should be able to roll Howard out on a regular turn and let him go if he can stay healthy and effective.

Health is one thing, but how effective can Spencer be in the majors? On the one hand, he has little experience, and a handful of starts in AAA in a normal year would have been a benefit for both him and those of us trying to project him, but there are a few things that we do know. For one, he travels with four quality pitches led by his hi-velo fastball which sits 94-98 with an occasional trip into triple-digits. His control and command is developing as you see in his stat box, but to me his kick is a little untamed and he tends to fall off towards first in stretches, which challenges Spencer's location. Those are easy fixes and there are times when both issues are calmed. On the plus side, Spencer has no qualms about working up in the zone and he's effective doing that.

He backs that velo up with a very good change, which of course has good delta from his mid-90s but also has great depth and arm-side run. It's a pretty pitch and a punch-out weapon. His curve has plus potential as well but needs some work (again, back to his need to develop command and location) and he has a very useable slider that plays up nicely when paired with his fastball. That curve helps him when he's working up in the zone as it tunnels well with his high-fastball.

Again, for me, I'd like to see him face some adversity and put a little more polish on his mechanics in AAA this year, but we don't have that option. The 6-3/205 RHP has just turned 24 and the Phillies are theoretically competitive and in baseball in 2020, that means you need to develop depth and bring along prospects quicker than you'd like.

In the long term, I like Howard, not necessarily as a #1, but he has the ceiling of a low-#2 or high #3, I think. I'd like to see how his stuff plays with more mature hitters, however. That's why I don't want to spend too much for him this year. There's a lot left to find out with Howard. Still, in baseball in 2020 we can't always be as patient as we'd like to be and Howard has the potential, at least, to be an impact starter (insert all rookie starter caveats here)

Go for him, unless your cost of acquisition is ridiculous. He could pay off this year, and in keeper leagues, I think we are looking at a quality starter in the long term.

You may have noticed Luis Patino coming out of the Padres' bullpen on Wednesday night as the 20-year-old right-hander made his MLB debut. It wasn't a great start to his career, Luis allowed 3 runs against the Dodgers on 3 hits with 2 Ks over 2 IP, but it was just that, a beginning. Luis is the Padres' other pitching prospect, behind McKenzie Gore, and as a result, he hasn't seen much of the spotlight. Not even as he hit AA as a 19-year-old last season, following 87 very good IP in high-A where he went 2.69/1.09 with a 31.6% K rate and a 15.2% SwStr%, which, by the way, is a career LOW swinging strike rate, including his MLB rate as I write this, is 15.6%.

How about this, then? His FB average Wednesday night was 97.4 mph. All of that out of his 6-0/192 frame. I know what you are thinking because I think it too. He's not as tall as I would like him to be as a power pitcher, but then again with high-90s velo, I'll keep an open mind for now. He's a FB/SL/CH guy and all the offerings have good future scores. The change needs some work, however. He showed it occasionally on Wednesday night but he was 93+% FB/SL and even with all that velo, his change delta was only 8 mph. (Which begs the philosophical question of whether an 89 mph change is indeed still a change. Ryan Weber - 88.1 average FB this year - you want to take that question?)

This brings us to what makes Luis so interesting to me (aside, from you know, the velo and all). All reports say his makeup and coachability are big time, and he's new to this, he's only been pitching for about 4 seasons. There's a lot of low-hanging developmental fruit for him and he seems willing and capable of collecting it all. Since becoming a pro he has almost literally rebuilt his body, adding up to 40 pounds by some accounts, and cashed in on (and seemingly parlayed) his physical maturation process which may not even be done yet. That's the source of his velo gains. He wants to learn, he puts in the work, and he installs updates voraciously. This is why I believe that his change gets a lot better and as that happens, his velo and general stuff will play up. This is why I believe his mechanics and repeatability will be sound and efficient and that will help protect his (relatively) small body from the strains of starting. He's also very conscious of his physical build and that will help. That repeatability and his ability to tinker with his mechanics should bring command with it as well. He's a guy with tremendous stuff that wants to get better and has demonstrated an ability to figure out how.

Now, he's still a flat 6-0, there's not much that can be done about that, but we aren't just working down in the zone these days, with downward plane. We are working up in the zone, changing eye level, using spin to create life to soften contact, mixing velos, and in this case we have a lot of velo to work with. He gave up a high percentage of fly balls on Wednesday (71%) but in AA last year his fly ball% was a very reasonable 38%. His height and his stature are a concern. But Luis has an arm, he has stuff, and he has personal drive. Right now I am betting on him. He's worth rostering if he's newly available in your league. Who knows what 2020 brings for Luis, but I am anxious to see what the kid is two summers from now.