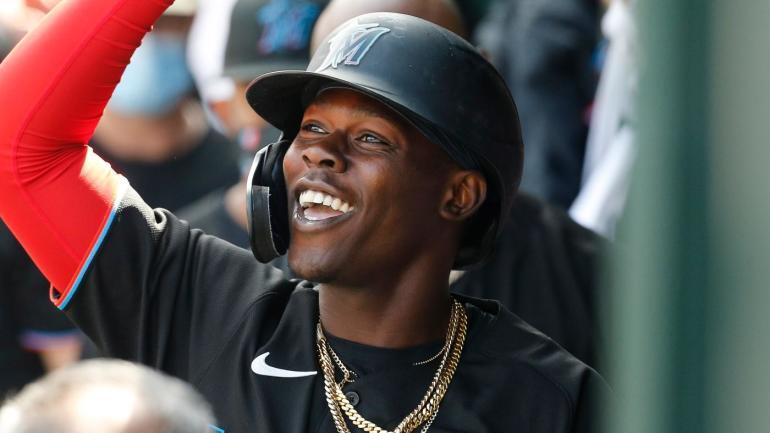 Chisholm snapped a week-long cold streak by slugging a pair of home runs and driving in six batters in Miami's 12-2 rout of Washington. Chisholm is up to 10 home runs to go along with nine stolen bases. The home run power is capped slightly by his slender frame. Chisholm has a 52% pull percentage and needs an uppercut swing to right field to pile up the homers. However, like Mookie Betts, Chisholm has the skills to make it work, and this season he is hitting the ball with a bigger launch angle. His two homers were hit with 33 and 34-degree launch angles. His season-long launch angle is nearly 14 degrees. It has resulted in significantly less ground balls and therefore a 36-point drop in BABIP, but his overall production is significantly higher because he's hitting with more power. Chisholm will stuff the box score and make the most of his skillset.

The sleeping giant is wide awake. Semien doubled his home run total on Tuesday, hitting three home runs in Texas' doubleheader split at Cleveland. He finished with seven hits in eight at-bats, adding a pair of stolen bases. He now has six home runs and 10 steals this season, and he has raised his OPS from .497 prior to his first home run on May 27th, to .635 following Tuesday's monster games. Semien never sacrificed contact during his struggles. It was only power that was lacking from his game, but he is now hitting the ball harder and generating more line drives. His seven hits raised his batting average to .221 and it might not be long before Semien's numbers are more closely resembling his output for Toronto last season.

Polanco had a big day on Tuesday, finishing a triple shy of the cycle, with four hits in five plate appearances. He hit his seventh home run and drove in two batters. Polanco's normally excellent plate discipline has been substandard this season. However, he hasn't struck out in his past three games and looks to be turning around what has been a slow start. Polanco's quality of contact doesn't look much different than last year, but he is much less aggressive and really struggling with diagnosing pitches outside the strike zone. His contact rate on pitches outside the zone is down to 63.5% from 73.4% just two seasons ago. Therefore, he is seeing fewer pitches inside the zone. More swinging and missing at pitches outside the zone has led to a 4% drop in contact rate. If any of that is related to a lack of confidence, Tuesday's four-hit effort could be the catalyst needed to turn his season around.

Winker's struggles continued as the Mariners outfielder finished hitless with three strikeouts in five at-bats on Tuesday. His average dropped to .207 and he is only slugging .296. Winker's batting EYE is as good as ever, but he isn't exhibiting nearly as much power as last year. Meanwhile, he is hitting way more balls in the air, leading to weak popups or fly balls. Winker had a friendly .324 BABIP in 2021 but now is saddled with an unlucky .238 BABIP. The truth is it should be somewhere in between, but with weaker quality of contact, Winker's margin for error is diminished. The good news is Winker is hitting lefties better this year. The bad news is he has regressed against righties. Seattle is somewhat committed to Winker in the outfield so he will have his opportunities to work out of his funk, but he needs to develop the flatter swing that led to a .300+ average in Cincinnati.

Manoah was excellent again on Tuesday, shutting the Royals out for six innings. He allowed six hits and walked three but hasn't allowed more than three runs in any start this season. He lowered his ERA to 1.81, although his xFIP is 3.72. Tuesday was also Manoah's first multiple-walk outing since his second start of the season. He has been fortunate to only allow five home runs in 69.2 innings, holding opposing hitters to a 6.4% HR/FB rate. Manoah is a flyball pitcher and if that HR/FB rate regresses, his ERA will as well. However, Manoah is so good at keeping runners off base, an increase in homers isn't as debilitating as it would be for other pitchers with worse control. The young right-hander is exceeding expectations, and even with some regression, he should finish among the top-15 starting pitchers.