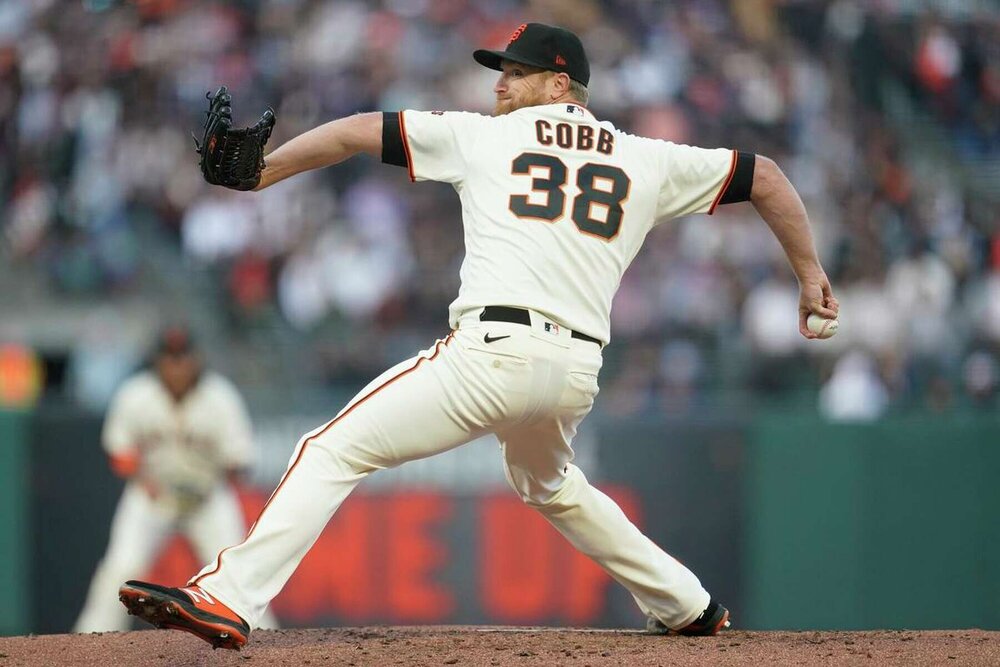 Cobb turned in a mediocre 4.09 ERA and 1.29 WHIP in 14 first half starts, but the underlying numbers portray a much more promising forecast. Cobb posted a 2.94 xFIP, buoyed by an elite 62.9% GB% across his 70.1 IP, and he only allowed hard contact at a 33.5% clip. He has suffered from some bad luck however with a .324 BABIP and 58.8% LOB%. His numbers have been a lot better since returning from the IL in mid-June; he compiled a 2.20 ERA and 1.07 WHIP in his final 6 starts before the all-star break. Fantistics projects a 3.06 ERA and 1.16 WHIP the rest of the way for Cobb and he is widely available in fantasy leagues. He is an especially strong play when pitching in San Francisco as he has recorded a 3.02 ERA at home this season (compared to 5.96 on the road).

Hoerner's calling card is his BA as he's hitting .307 at a time when the league average is floundering at .242. He has always been a good contact hitter, but he has taken it to the next level this season, lowering his K% to a career-best 10.7%. And while BA is his main asset, he has been chipping in in other categories as well. After not homering even once over the last two seasons (296 PA's), he has hit 5 HR's this season, as he has started to pull the ball a bit more often. He has also contributed 9 steals, which is not quite as novel for him as the HR's. Fantistics projects him to continue roughly at the same pace, with projections of .292, 4 HR's and 8 SB's in the second half, and he is available in more than half of fantasy leagues.

Laureano got off to a late start this season due to his suspension and he struggled a bit after rejoining the A's in May, so it's somewhat understandable that he fell off the radar of many fantasy owners. But he has been contributing across the board over the past couple of months, hitting .255 with 9 HR's, 7 SB's and 27 runs scored over his final 50 games before the all-star break, with 7 of those HR's coming in his last 16 games. Of course, this isn't out of the blue - Laureano has averaged 25 HR's and 19 SB's per 162 games throughout his career. Fantistics projects him to hit .261 with 8 HR's and 11 SB's the rest of the way, numbers that would play on nearly any fantasy roster. He is currently available in more than half of Yahoo leagues and 80% of ESPN leagues.

Matz has had a rough start to his Cardinals tenure, posting a 6.03 ERA across his first 9 starts this season, before a shoulder injury put him on the shelf for about 2 months. He was just activated from the IL before the all-star break as he looks to turn his season around in the 2nd half. Matz' peripheral stats suggest that he has been a lot better than his ERA would indicate, as he owns a phenomenal 44:8 K:BB across 37.1 IP thus far along with a career high 11.1% SwStr%, good enough for a 2.99 xFIP. He has been burned by a .350 BABIP and 21.1% HR/FB%, the latter of which would be higher than any qualified pitcher. His luck should change going forward and he could very well be an asset for fantasy teams in the second half. Fanistics projects a 3.48 ERA and 1.19 WHIP for Matz the rest of the season, and he is available in over 70% of fantasy leagues.

Walker had a huge first half from a power perspective as he blasted 22 HR's in 90 games, placing him 2nd in homers amongst first baseman. Despite the abundance of dingers, fantasy owners have been slow to pull the trigger on Walker, who is still available in about half of fantasy leagues. Presumably, owners are turned off by his batting average, which sits at a lowly .204 through 370 PA's. The meager BA is largely the result of bad luck however as he currently owns a .188 BABIP after posting BABIP's north of .300 each of the last 3 seasons. Walker has actually cut his K% to a career low 19.2% while maintaining a strong 43.7% HardHit%. His xBA for the season is .252 and Fantistics projects him to hit .261 the rest of the way along with a whopping 14 more HR's. Those numbers would certainly play in nearly any format.