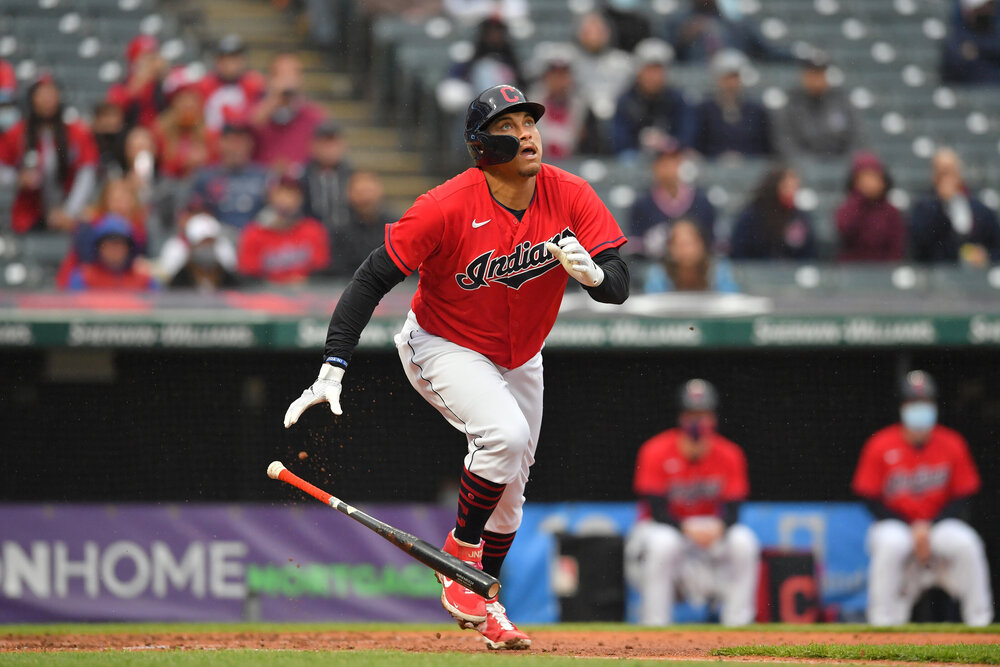 Josh Naylor (1B-CLE) went 2-5 with a 2-run blast against Toronto on Friday. In what has easily been his strongest big-league season, the 25 year-old now boasts a .271 average to go with 15 homers, 56 RBI, and 3 stolen bases through 318 PA on the campaign. True to form, he's not fanned often (16%) while logging a career-best 43% hard-hit rate per Statcast and posted a career-low 47% groundball rate, which has helped him offer a bit more in the power department as that hard-hit rate has ticked upwards. Pair that blossoming power with his above-average contact ability (82% contact rate this season) and what we have as an intriguing fantasy option. The scouting grades all pointed to such a profile, so there's little reason to think that this isn't real. Injuries, after all, have cut into his early big-league career.

Jose Berrios (SP-TOR) got knocked around by Cleveland on Friday evening as he coughed up 8 runs on 8 hits and 2 walks while striking out just 1 over 4 innings of work. He surrendered a pair of dingers while throwing 47 of his 73 offerings for strikes in the contest. Berrios's first full season in Toronto has been a nightmare for his fantasy owners, as he now owns a 5.61 ERA, 8 K/9, and 2.3 BB/9 across 23 starts (122 innings). A 4.17 xFIP gives hope that he'll turn things around, especially since his 17% HR/FB is a career worst while his .313 BABIP is currently the second worst of his career. But the bottom line is that Statcast shows that he's gotten blistered to the tune of a 45% hard-hit rate (35% career), which doesn't bode well for a guy with a 38% groundball rate. He lines up for a turn at home against Baltimore this coming week and that squad isn't quite a bunch of cupcakes like in recent years.

Ranger Suarez (SP-PHI) held the Mets in check over 7 innings on Friday evening, allowing just 1 run on 3 hits and a pair of walks while striking out 4. The 26 year-old southpaw threw 58 of his 93 pitches for strikes in the outing and kept the ball in the yard. And so his turnaround continues this season, as he now owns a 3.52 ERA, 7.5 K/9, 3.3 BB/9, and 3.76 xFIP over 107.1 innings after entering the All-Star break with a 4.07 ERA, 7.3 K/9, 3.5 BB/9, and 3.97 xFIP across 84 IP. One might recall that it was his strong second half last season that made him a popular breakout candidate entering this season. So perhaps he's figured some things out and is breaking out. Or he's just a second-half guy. Fantasy owners will just have to take the gamble next season and find out. At any rate, in the immediate future he's facing a favorable turn in Cincinnati next week.

Cal Quantrill (SP-CLE) was stellar against Toronto on Friday, throwing 7 shutout innings in which he allowed just 1 hit while walking none and striking out 7. The 27 year-old tossed 64 of his 98 pitches for strikes in the outing. On the heels of an impressive 2021 campaign (2.89 ERA, 7.3 K/9, 2.8 BB/9 across 149.2 IP) that many had reason to be skeptical about him being able to repeat (a 4.43 xFIP was a red flag), he's again defied the advanced metrics in posting a 3.67 ERA that comes in significantly below his 4.51 xFIP. A K/9 of 6 is certainly unexciting, although his 2.4 BB/9 is improved from last season. Quantrill has continued to live on getting hitters to make limited hard contact (30%) and has, in fact, gotten them to chase pitches outside of the zone a bit more this season (35% in 2022, 31% last season). His fantasy owners may understandably have a hard time trusting him, but the good news is that he's currently slated to face the Tigers at home next week.

Josh Jung (3B-TEX) received more quickly than anticipated from a torn labrum that required surgery in late February, but is back in Triple-A and producing after a stint with the Rangers' rookie-level Arizona Complex League team (.240, 3 homers, 5 RBI with an 11% walk rate and 17% strikeout rate across 29 PA). Through just 15 PA entering Friday's action, Jung was hitting .308 with a dinger, 4 RBI, and a steal while walking at a 13% clip and fanning at a 27% rate. Obviously, one can't put much stock into such a small sample size, but it appears that 1) he is healthy and 2) he's already rediscovered his power stroke. Jung is an exciting prospect for fantasy because of his plus power and, as he illustrated during the 2021 season, an improving hit tool that led to a .308 average across 186 PA in Double-A and a .348 clip over 156 PA in Triple-A. Pair the hit-power combo with his solid patience (12% walk rate in Triple-A last season) and an ability to keep the strikeouts to a reasonable figure (22% across both levels in 2021) and you are looking at a guy who should produce in the majors. Jung - who is the #27 overall prospect in baseball and the #2 guy in the Rangers system behind only Jack Leiter (per MLB Pipeline) - could get a cup of coffee before season's end, but expect him to get the opportunity to be Texas's opening-day 3B in 2023.