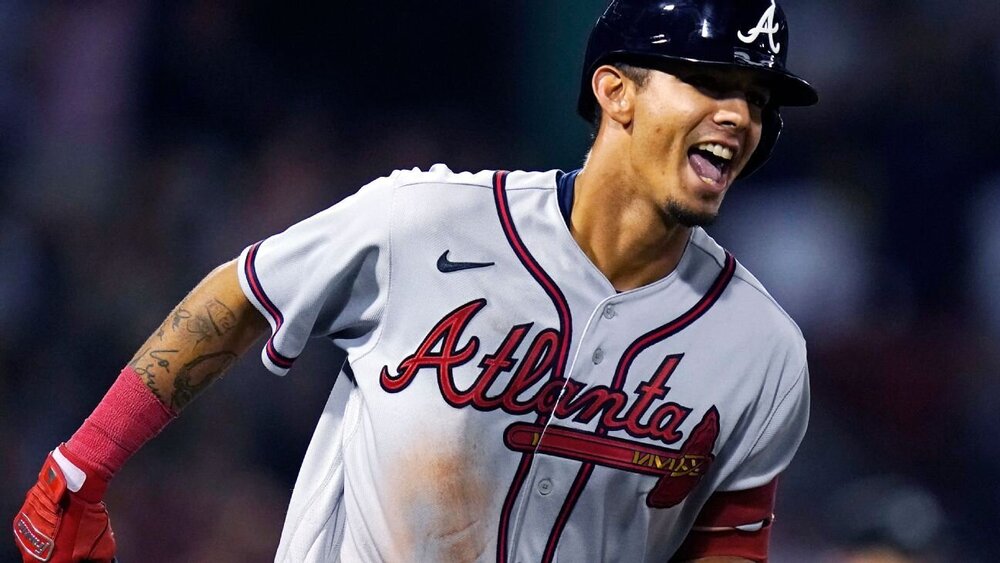 Vaughn Grissom (2B/SS - ATL) - It was a heck of a debut for 21 year old Vaughn Grissom, who went 2-4 with a HR and a SB while starting at 2B on Wednesday for the Braves. Grissom has done nothing but hit at every level since being drafted in 2019, hitting well above .300 with solid power and excellent speed. This season between A and AA Grissom was hitting around .330 with 14 HR and 27 SB in 96 G, and hitting at the tail end of Atlanta's excellent lineup certainly won't hurt his counting stats. He should be picked up immediately, and we can worry about what will happen to his playing time when Albies comes back in 2-4 weeks when we get there (my expectation is that Rosario will be the odd man out and the 3 MIF will rotate through the DH slot).

Charles Leblanc (3B/2B - MIA) - Leblanc had a pair of singles on Wednesday against the Phillies, and he's now reached base in all 10 games that he's played for Miami. A nondescript prospect for the first 4 seasons of his professional career, Leblanc had the fairly typical power bump at age 25 in the Texas system last year, hitting 17 HR in 96 G at AAA but watching his contact rate suffer for it. This season in the Marlin organization he's been able to push the contact rate back up while maintaining the power, and has turned into a bit of a sleeper prospect as a result. I'm certainly skeptical of the AVG, as the .302 mark at AAA was boosted by a .396 BABIP, but a player that's eligible at 2B and 3B with average to above average contact ability, power, and speed is absolutely worth paying attention to: even in Miami. I believe that he's worth a speculative pickup in most formats if you have the room.

Touki Toussaint (P - LAA) - I've already seen some leaguemates of mine picking up Toussaint after his 5 IP, 2 H, 0 R, 2 BB, 6 K start against Oakland today. Look, it was Oakland. Anyone with a pulse can shut down the A's. Toussaint's next 4 starts are against the Mariners, Rays, Jays, and Astros....I'm not a buyer. The velocity is down, the walk rate is still far worse than "problematic", and the EV allowed is perpetually a weak spot for a flyball pitcher. I know that many people remember just how highly touted a prospect Toussaint was, but his control has never developed, and pitchers that routinely walk 4-5 batters per 9 simply do not succeed at the big league level, and that doesn't even account for the 1.53 career HR/9. Walks and homers are what you want from your hitters, not your pitchers. Let somebody else take the risk here.

JD Davis (3B - SF) - Davis was 3-4 with a HR on Wednesday, and he's now hit 3 homers in 7 games since coming over to SF from the Mets. Whenever Davis has played every day in his career, regardless of the level, he has produced in a big way. Even in part-time action this year he has produced a hard hit rate of almost 57% and an exit velocity of 92.7, which borders on elite. His contact issues, which had almost disappeared from 2018-20, have resurfaced the past few years, but he is definitely a player that I'm willing to gamble on now that he's back playing every day....even in the pitchers park in San Francisco. He's yet another player that has been cast into the "lefty-masher" bin that really doesn't have any split differential to speak of.

Jeffrey Springs (P - TB) - Springs allowed 2 runs on 3 hits and a walk to Milwaukee in the 1st inning Wednesday, but then proceeded to shut them down over the next 4 innings, striking out 8 and allowing just one more single. Through 15 starts, Springs still has just the one outing in which he allowed more than 3 runs, and the walk rate and K rate have both been extremely impressive. The GB rate and EV allowed are great as well. He's pretty clearly a top-60 arm for me and is slowly moving into SP4 territory...the only hangup is that he's been limited to roughly 90 pitches per game, and he isn't the most efficient pitcher despite the low walk rate, so 6 innings is about the limit. Still, you could do a lot worse for the 4th or 5th SP on your staff.