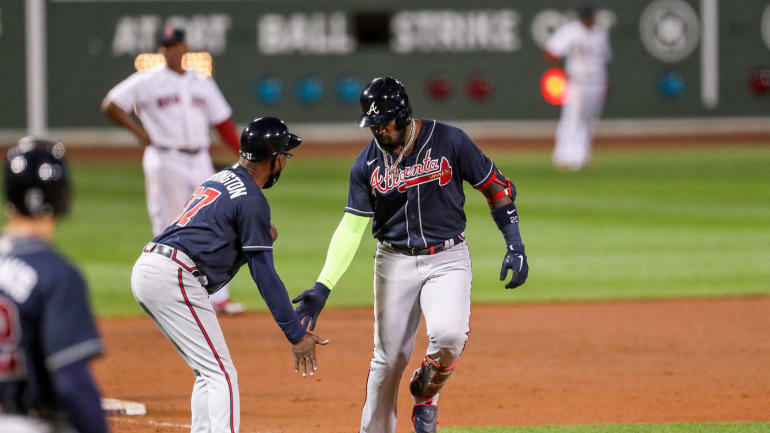 Oneil Cruz enjoyed the first four-hit game of his career on Monday, going 4-for-5 with two runs scored against the Reds. The 23-year-old rookie shortstop paced Pittsburgh's 8-3 win from the leadoff spot, leading all players in hits and runs. Surprisingly, none of those knocks went for extra bases despite Cruz's immense power, which has already produced 17 home runs, 51 RBIs, and a .228 ISO. He still needs to harness that power, as evidenced by his .225 average and whopping 36.7% strikeout rate, but he's a five-tool stud with all the skills to be a superstar for years to come. He's already started making more consistent contact and is batting .294 over his last 21 games, finishing his rookie campaign on a high note. The plate discipline and pitch recognition definitely need some work, but those are things that should improve with time as he gains more experience. It will be exciting to see what Cruz can do in a full season next year after being held down until late June this season, as the sky's the limit for this former top prospect.

Bryce Elder made history on Monday, becoming the first Braves rookie pitcher since 1990 to throw a shutout. Elder flummoxed the Nationals over nine beautiful innings, scattering six hits and a walk while striking out six. This was easily the best start of Elder's career thus far, especially considering the context with Atlanta still fighting to win the NL East. The 23-year-old righty was at his absolute best in just his eighth career start, throwing 65 of his 106 pitches for strikes and getting 10 outs on the ground. The biggest key for him was throwing strikes and issuing just one walk, as he'd given up 21 free passes over 40 innings coming in. It also didn't hurt that he had plenty of run support in an 8-0 victory, or that he was facing a terrible Washington squad that became the first team to lose 100 games this year. Even so, there's no denying that Elder has had a nice impact on the Braves, going 2-3 with a 2.76 ERA, a 1.22 WHIP, and 42 strikeouts in 49 innings. He's made a solid case for himself to remain in Atlanta's rotation next year as long as he's able to keep his walks under control.

Matt Olson paced the Braves' 8-0 victory over the Nationals on Monday, going 1-for-2 with a homer, three RBIs, and a walk. Olson broke a scoreless tie with his two-run shot in the top of the fourth, breaking the ice in Atlanta's eventual victory. He later added a sac fly and a walk for good measure to round out his evening. The long ball was his 29th of the year but first since Sept. 6, ending a homerless streak of 17 games spanning 66 plate appearances. Olson was ice-cold during that stretch in general, batting .115/.182/.148 with only two RBIs, three runs, four walks, and 23 strikeouts. Despite the major funk, the slugging first baseman only needs one more dinger for his third career 30-homer season and just five more RBIs to reach the century mark for the second year in a row. While his September swoon has dragged down his rate stats, his .234 average and .775 OPS aren't too far off his career marks of ..248 and .839. The Braves are just hoping Olson can get right for the playoffs, as they'll need him to be productive in the middle of the order if they're going to win their second straight World Series title.

J.D. Martinez shined during Boston's 14-8 loss to Baltimore on Monday, going 2-for-5 with a double, a solo homer, and two runs. Martinez put the Red Sox on the board with his solo shot to lead off the bottom of the second against Jordan Lyles. He later doubled and came around to score. While the doubles have been plentiful again for Martinez this year (41), the long balls have been few and far between, as he's only managed 13 in 131 games this year. That's a major drop-off from last year's 28 dingers, but it's merely the continuation of a trend as his power numbers have been in steady decline since 2018. The home run shortage helps explain why he only has 56 RBIs this season as well despite batting in the middle of Boston's lineup, although a paltry .223 average with runners in scoring position is a big reason for that as well. Martinez is starting to show his age at 35 with a career-worst 84.7 mph average exit velocity and his worst hard-hit rate (42.3%) for a full season during the tracking era, but thankfully for the Red Sox he's in the final year of his contract. Wherever he goes, he'll likely miss Fenway Park and hitting near Rafael Devers and Xander Bogaerts. Unless he ends up in an extreme hitter-friendly environment next year, fantasy managers should probably stay away from him if possible.

Marcell Ozuna went 2-for-4 with a double, a homer, two runs, and two RBIs against the Nationals on Monday. Ozuna helped drive Atlanta's 8-0 victory from the eight-hole, bashing a solo homer in the fifth and an RBI double in the sixth. The big game extended his hitting streak to four games, giving him 22 homers, 53 RBIs, and 55 runs with a .224 average and a .678 OPS in 120 games this year. Ozuna's disappointing 2022 seems to have proved that his even worse 2021 (.645 OPS in 48 games) was no fluke, as there's now a full season's worth of data suggesting he's a below-average hitter. Between his age (nearly 32) and his plate discipline falling off a cliff (49:163 BB/K ratio since the beginning of 2021), Ozuna appears to be on the downswing. He seems to have gotten unlucky with a .247 BABIP since the beginning of last year, but that's also a byproduct of his lower 89.9 mph average exit velocity during that time and his career-worst 20.9% line-drive rate this season. Injuries seem to have taken their toll as well, as he's missed considerable time in each of the past two seasons. Add it all up, and you don't have a super appealing fantasy option for 2023. He still has a decent floor, but there's not much of a ceiling.