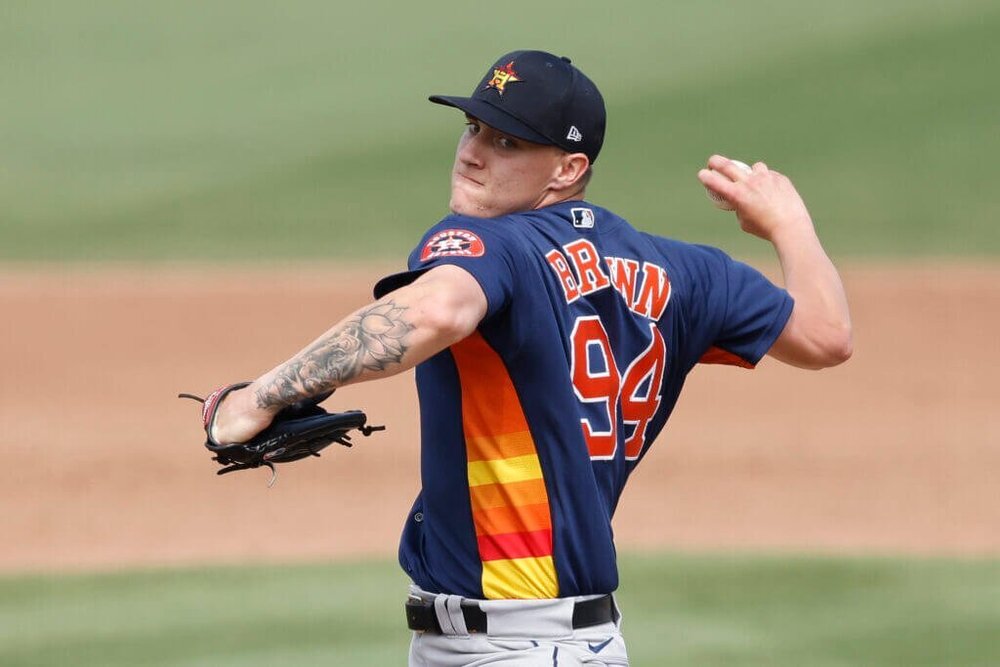 Hunter Brown (P - HOU) - The Astros had been incredibly patient with Hunter Brown compared to most teams these days, giving him over 200 IP in the high minors over the past two seasons before tabbing him for his major-league debut on Monday against the Rangers. I came away from the outing impressed, but I didn't think he was as good as the line looks overall. Brown tossed 6 shutout innings, allowing 3 hits and a walk while striking out 5 over 79 pitches. The fastball sat in the 95-97 range for just about the entire outing, and he also featured a hard slider (92-93) and a curveball in the low 80's. The control was much better than advertised, although it degraded a bit the second time through the lineup as he stopped getting swinging strikes, and the ability to generate GBs was very evident throughout (10 GB outs). His next few starts should come against the Angels and A's, so he's getting a fairly cushy introduction to the majors....I'd be inclined to use him for these first few weeks mostly due to that. There were a lot of hard-hit balls (just about all grounders, but still) in the outing, and when combined with the lack of swinging strikes after the 2nd inning I'm much less excited than I thought I'd be, but there is clearly a good ceiling here. I would treat him as an SP4 for the stretch run, and I'm absolutely interested in redraft leagues for 2023. If he can maintain the level of control that I saw in this initial outing, he could be a mid-rotation starter as early as next season.

Ryne Nelson (P - ARI) - Much like his fellow Monday debutante Hunter Brown, Ryne Nelson has come to the majors with over 200 IP in the high minors under his belt. After 7 innings against the Padres on Monday, he has still yet to allow a run, as he scattered 4 hits while striking out 7 without walking a man. Unlike Brown, who has had nothing but success this season at AAA, delaying Nelson's debut made some sense: he's posted a 5.43 ERA through 26 starts and struck out less than a man per inning. He did manage 10 swinging strikes on his debut in 87 pitches, but the control appeared to be much better than expected, although he also seemed to benefit from an expanded strike zone at times. The fastball was 95-98 and is easily his primary pitch, and you can see from his willingness to both be fastball-heavy and to pitch in and around the strike zone that there could be some HR issues at times. I do like the potential here, but the schedule is fairly difficult for the D-Backs down the stretch (@COL, LAD, SD, @LAD, SF, @HOU, @SF, @MIL) and they may be using a 6-man rotation as well. I'd probably keep Nelson as a deep-league add only right now unless you're light on SP arms...I think the floor here could be sketchy based on his minor league track record and that difficult schedule. Still, Monday's outing showed a very nice ceiling as well.

Jose Suarez (P - LAA) - Suarez was fantastic on Monday, holding the Tigers to 3 hits and a walk over 7 scoreless innings, striking out 7 to even his record at 6-6 on the year. Speaking of 7's, that makes 7 straight starts for Suarez with 3 runs or fewer allowed. Yes, I know that the competition hasn't been the greatest, but you can only go against the teams on the schedule, and Suarez has cut his walk rate by more than 50% since the start of the 2nd half. The swinging strike rate is actually a touch above average despite the mediocre K rate, and the FB rate has crept down a bit as well. I would still have some hesitancy about running him out against a solid Houston offense next time out, but the remainder of his schedule isn't all that difficult. I think he's a solid add as a back-end starter in just about all formats for the last month.

Elvis Andrus (SS - CWS) - Andrus has clearly been rejuvenated by getting out of the AAA lineup in Oakland. He doubled and homered out of the leadoff slot on Monday to lift the White Sox to a 3-2 win over Seattle, and he now has 3 HR in his last 6 games to go along with a 9-game hitting streak. He's hitting 303/333/500 with 8 R and 13 RBI in 16 G with Chicago, and while fortune has certainly been in his favor in terms of BABIP during this stretch, I do believe that the solid contact ability, improved supporting cast offensively, and average-minus power with average speed make him a reasonable option at MI for the last month of the season.

Stone Garrett (OF - ARI) - Garrett is off to a torrid start with Arizona: after doubling and homering on Monday he has 4 2B and 3 HR in his first 33 ABs, good for a 424/424/818 slash line. There are massive contact issues here, but the power/speed combo is extremely intriguing, and riding the hot hand is certainly a September thing (it's probably an "always" thing to be honest). The 26-year old Garrett is finally up with Arizona after 7 1/2 minor league seasons, but with 53 HR and 32 SB over 206 G the past two years in the minors, the potential for production here is very evident. This year's 14.8% swinging strike rate at AAA was his lowest(!) ever, so there are going to be contact problems here, but he is clearly worth a pickup in just about all formats just for the impressive ceiling in power (95.8 EV and 63% hard hit rate in his first 30 MLB AB) and speed.