So...the only reason you haven't seen this rant posted earlier is that I have been too stunned up till this point to even comment.Â  First, you have Charlie Manuel's profanity-laden tirade at an eminently unlikable reporter/talk show host.Â  Wow.Â  Where do you even go with that one?Â  THEN...mere hours later, the Phillies announce they are converting their #1 starting pitcher to a late reliever.

THEY ARE CONVERTING THEIR NUMBER ONE STARTER INTO A PITCHER WHO WILL PITCH ONLY ABOUT AN INNING PER GAME.

He isn't even going to be the closer!Â  I mean, only the Phillies could make such a stupid ridiculous move...AND screw it up in the process!Â  They can't even get idiocy right.

Now here's where it really gets scary, Part I:Â  In an interview on Mid-Atlantic SportsNet yesterday, Myers said that he made Manuel PROMISE him that he will NOT move him back into the rotation.Â  I don't have the strength to even say that again.

Now here's where it really gets scary, Part II: ESPN.com's Jayson Stark (who was a Phillies beat writer and columnist before he went to ESPN) reports that "there continues to be no sign that Manuel is in any short-term danger of getting canned".

When does Eagles training camp open?

By the way, I borrowed the headline for this rant from a column by Philadelphia Daily News columnist Rich Hoffman, who is usually a pretty good read. 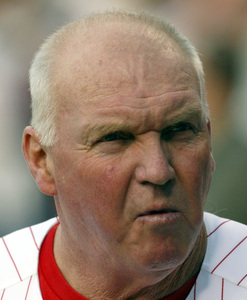 Cooperstown and the ‘Roids - Bill James

The death of Nick Adenhart

A Day at the Ballpark