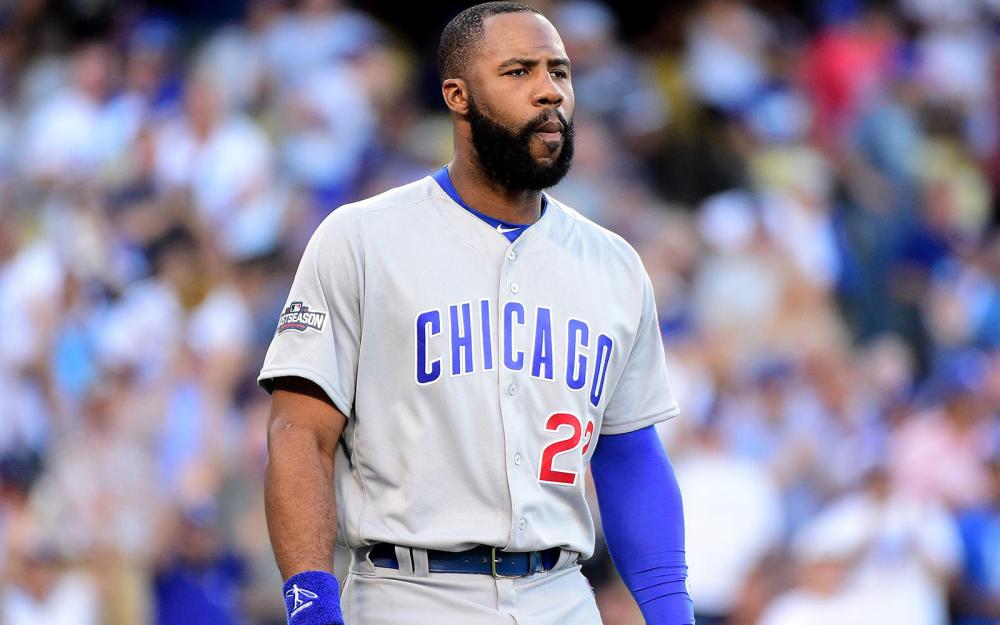 Jason Heyward continued to rebound from a miserable 2016 campaign, launching a three-run homer and finishing the day 1-4 with four RBI. He's already amassed 16 RBI along with a .294/.342/.456 slash line, and his swing overhaul appears to be reaping rewards already. His underlying numbers don't actually indicate any type of change however, and even his hard contact rate is still below average just as it's been since 2012. The only discernible change to this point from the new swing is a career-high pull percentage, which sits at 47%, and that's more appraoch-based. That could lead to more power, but there's no other evidence to this point that Heyward has really turned a corner to regain his old form. In fact, his reach rate is actually up and his walk rate is down to just 5.5%. Being in such a strong lineup will continue to act as a buffer if/when the batting average comes down, but don't get overly excited about what he's done so far. His swing will remain a work in progress as the season wears on.

Hernan Perez had a fine fantasy night, going 2-4 with two runs, four RBI, and a steal. Perez will often draw the start against a left-handed pitcher, as he did here against Reds southpaw Amir Garrett. He struggles against righties though, and that limits his upside dramatically. He's also a man without an every day position, making him unworthy of a roster spot in standard mixed leagues. His current double-digit walk rate, which is more than twice as high as his career mark, is also a mirage. His swing rate and chase rate are just as high as ever, as is his 13% swinging strike rate and 74% contact rate. He's got plenty of speed, but it's going to be very hard to utilize it unless you're in a deep league with daily roster moves. Ideally, he's best left for DFS play.

Tyler Anderson was knocked around yet again, this time by the Bryce Harper-less Nationals in Coors Field. His final line for the night was 5.2 IP, 6 H, 4 ER, 1 BB, 5 K. Pitching in Coors is hard for everyone, so with any luck you had him benched for this start, and especially against a potent Nationals lineup. Now saddled with a 7.11 ERA over his first 25.1 innings (5 starts), Anderson is looking like a shadow of his former self. He still maintains solid strikeout and walk rates (22:8), but has been far less adept at getting the ground ball this year. His GB% sits at 39%, whereas in 2016 it was a very nice 51%. That helped him limit the home runs (0.94 HR/9), but this year he's already allowed six homers in his five starts for a rate of 2.13 HR/9. It would be wise to keep him on the bench in all formats (a safe drops in most mixed leagues) until he can regain the groundball success he enjoyed off both his fastball and slider a year ago. He's got another brutal matchup to avoid in his second start of the week as he heads to Arizona to face the Diamondbacks.

Ryan Zimmerman banged his seventh homer of the year, the two-run blast going as his only hit of the night. The early .385/.437/.800 slash line is quite the surprise following his .218/.272/.370 line from 2016 spanning 467 plate appearances. His hard contact rate was still good last year at 35%, but he devolved into a ground ball machine, at 49%. He's got his LD% back up to 24% though, and with 40% fly balls he's found his power stroke once more. It seems like only a matter of time before he's injured again, which has been the tale of his latter career, but until that happens he should be owned and started in all but the shallowest of mixed leagues.

Zack Greinke squeezed as much juice as he could out of another nice matchup with the Padres, yielding just one run over six innings with no walks and 11 strikeouts. He lowered his ERA to 2.93 in April, and his FIP (2.55) and xFIP (3.17) agree that it's no fluke. His 8.48 K/9 and 1.88 BB/9 are reminiscent of his 2014-15 seasons that were Cy Young caliber, so those that gambled on Greinke have to be pleased so far. However, it also helps that his start before this one was also against this same hapless Padres offense, and that goes a long way towards padding your numbers. It's worth noting that he's still dealing with diminished velocity from last year, but as a crafty veteran with plus command that should be an issue he can deal with. Things should continue to trend upwards for him when Arizona puts in their Humidor in a month or so. Homers have diminished from Coors by around 25% with the use of a Humidor, so this is exciting news for every D'Backs pitcher. He'll have to get by without its benefit for now though, and he'll face a much tougher offense in his next start, at home against the Rockies.

This is just a small sample our our daily analysis, join our member area for over 80 player updates daily: http://www.fantistics.com/salesbaseball.php3 Click here for details: https://www.insiderbaseball.com/baseballsample.htm