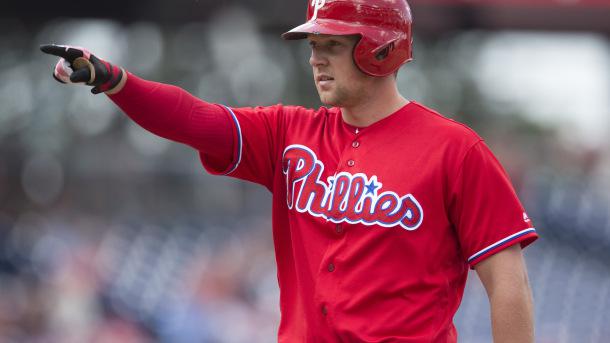 Robbie Ray (SP-ARI) - When you strike out nine, and walk a pair, that can tend to elevate your pitch count, and that was what happened to Ray on Thursday. The lefty fanned nine Mets over five innings while allowing just a Yoenis Cespedes home run and one other hit to lower his ERA to 3.06. Not bad considering his last start came in July and in that one, Ray was hit in the head by a 108 mph line drive. Ray now has an elite 11.6 K/9, with really only a 4.4 BB/9 holding him back from becoming one of the 15-20 best starters in the game. He's held hitters to a .203 BAA while continuing to develop his secondary stuff behind a 94.3 mph average fastball. It's not easy to just suddenly develop elite level control, something Ray has never had, but if he can make some adjustments in the offseason, he could take a big step forward in 2018. Even this year, Ray is highly valuable for his strikeout potential, and he's made significant progress against RH hitters, a group who was hitting just .204 against him prior to Thursday and who hit .272 off him in 2016.

Rafael Montero (SP-NYM) - With most of the Mets' pitchers occupying DL slots these days, Montero should get a chance to stick in the rotation for at least the rest of this season. Thursday, Montero was cruising through four shutout innings against Arizona before ultimately allowing three runs in 5.1 innings with a 5:2 K:BB to take his ERA to 5.44. Montero now has a 3.12 ERA in his last three starts, though his record does sit at an abysmal 2-9 and his WHIP of 1.73 is nothing to write home about. Montero has a 9.1 K/9, so there's definite fantasy value in deeper formats, but his 4.6 BB/9 limits his fantasy appeal. It's tough to see Montero reaching the potential that once had him as one of the organization's top pitching prospects a few years ago, but he could find himself with some short-term value this year given all the Mets' injuries.

Brandon Nimmo (OF-NYM) - With the news of Michael Conforto's shoulder injury on Thursday, that would in theory open up an outfield slot for Nimmo to play regularly. Nimmo replaced the injured Conforto on Thursday and went 0-for-2 with an RBI groundout. That left Nimmo at .269/.397/.345 with no homers in 52 at-bats. That is pretty much the scouting report on Nimmo - high OBP, low power, no speed. In Triple-A, Nimmo was batting .227/.364/.368 with a 16.7% BB% and 24.7% K%. Given he is a former #13 overall pick (2011), the 24-year-old could be one of those guys who breaks out later in his career a la Justin Smoak, but unless OBP is a category in your deep fantasy league, don't expect a lot from Nimmo this year. If however they hit him second in front of Yoenis Cespedes in the lineup, that will certainly help him to see a lot of good pitches.

German Marquez (SP-COL) - Despite home runs being way up this season, the stigma surrounding Rockies' pitchers has seemed to subside somewhat. Whether that's due to the talent on the roster or what, Marquez is having a quietly-solid season. He did allow a couple home runs Thursday, but it was the only two runs allowed in six innings, dropping his ERA to 4.18 in 125 innings with a 115:40 K:BB. He also averages 94.9 mph with his fastball. Marquez will allow his share of home runs, especially at home, but his solid 2.9 BB/9 helps to mitigate the damage. Marquez didn't allow many home runs coming up through the minors, so if he can at least get partially back to keeping the ball in the ball park, it's possible we could see him finish with a sub-4.00 ERA this year.

Rhys Hoskins (1B/OF-PHI) - Apparently Hoskins didn't get the note that things weren't supposed to be this easy. Hoskins was 2-for-5 with a homer and three RBI Thursday, lifting him to a solid .283/.406/.755 with a decent eight home runs and an 11:10 K:BB In 53 at-bats. That's 37 total home runs (including Triple-A) this year for Hoskins after the 24-year-old hit 38 the year before. The plate discipline is advanced and even his 17.2% K% is excellent for a guy with his power. Tommy Joseph could still be traded this winter to open up first base, but even if Joseph stays, an outfield of Hoskins, Odubel Herrera, and Nick Williams could be in the cards, with Aaron Altherr likely the odd man out barring some sort of trade. He should be a fixture in the improving Phillies' lineup for several seasons