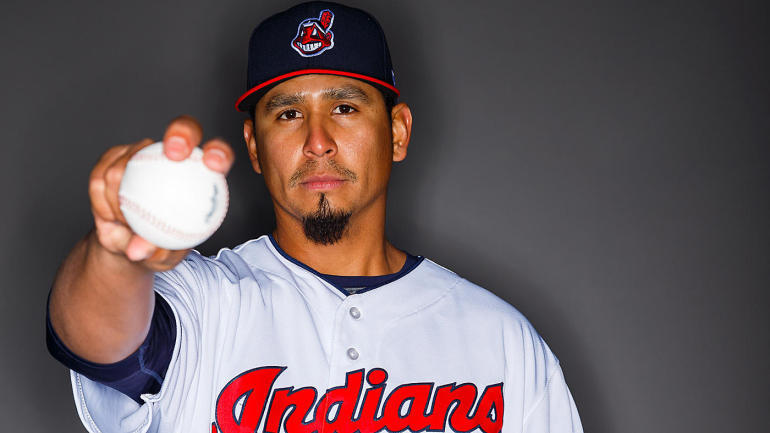 Carlos Carrasco (SP-CLE) - Granted it was against a Twins team that was resting a large number of regulars after having clinched a Wild Card spot the previous day, but Carrasco came up big on Thursday. The righty allowed six hits over 8.1 shutout innings while walking one and striking out a season-high 14. Carrasco finishes with career-highs in starts (32), innings (exactly 200), and strikeouts (226). In his last seven starts, Carrasco ended up going 6-0 with a 1.27 ERA and 59:5 K:BB in 49.2 innings. Look at that and what Corey Kluber did down the stretch and the Indians are going to be tough to beat this postseason. Carrasco has one year plus two option years totaling $26.5 million remaining on one of the league's most team-friendly contracts. He's already a top-10 starter in this league and it's possible we've yet to see his career year.

Shane Greene (RP-DET) - Greene recorded his eighth save of the season Thursday and first since 9/8 with a scoreless inning against the Royals. He did allow a pair of baserunners but managed to work out of it and lower his ERA to 2.70. a 72:34 K:BB in 66.2 innings shows both his ability to miss bats and miss the strikezone. Greene's mid-90s stuff gives him that closer upside, but the walks are enough for me to think he won't be the closer in 2018. There really isn't a guy on the roster who I look at and say, "that's the guy", though I do like the Kimbrel-like K/9 rates Joe Jimenez has put up in the minors. I just don't like the 13.00 ERA he's put up in 18 innings. Guess here is the Tigers throw a bunch of kids and cheap veterans in the mix next spring and see who's left standing. Could be Greene, but probably some cheap free agent is more likely.

Mike Minor (RP-KC) - Given the dearth of analysis on Minor this year, I'll give him a little attention this week, and it's well-deserved. With Kevin Herrera having been removed from the closer role, manager Ned Yost had announced that Minor would share closer duties with Brandon Maurer and Scott Alexander. That was on September 12, and since then, Minor has all four of the team's saves, so he's the guy right now. Overall for the year, Minor has been excellent, posting a 2.62 ERA, 11.1 K/9, and 2.5 BB/9 over 75.2 innings. At 94.4 mph on average, Minor's fastball has jumped four mph since transitioning to the bullpen, so he's found a home. The Royals could open this up to competition next spring, but Minor heads into the offseason as the favorite to close in 2018.

Tyler Skaggs (SP-LAA, FanDuel: $X) - Skaggs is my bargain pitcher for Friday going up against Marco Gonzales and the Mariners in Anaheim. Skaggs has had his ups and downs obviously, but he's shown some positive signs of late. He held the red-hot Indians to two runs in 5.1 innings a couple starts ago, and before that held the tough Astros lineup scoreless over seven before they got to him for four runs in five innings last time out. Skaggs has a 4.48 ERA in 15 starts with a 7.7 K/9 and 3.0 BB/9 while showing pretty good velocity relative to his past efforts. Skaggs made his MLB debut way back in 2012 and has yet to make 20 starts in a season due to a myriad of arm injuries. If he can stay healthy in 2018, there's #3 starter upside here.

Ervin Santana (SP-MIN) - Santana fared well in his Wild Card tuneup on Thursday, holding the Indians to four hits over five shutout innings. He walked none and struck out just one in lowering his ERA to 3.28. Santana finishes with a 167:61 K:BB in 211.1 innings over 33 starts. The ERA is solid, though obviously allowing 31 home runs isn't ideal. Santana has now logged at least 30 starts in seven of his last eight seasons, and he's now logged 16+ wins in four seasons. Santana had an ugly 5.16 ERA back in 2012, leading to his departure from the Angels, but he's been one of the more reliable mid-rotation starters since. Expect more of the same in 2018.

This is just a small sample of our daily analysis, join our member area for over 80 player updates daily. Click here for details: https://www.insiderbaseball.com/baseballsample.htm Click here to register: http://www.fantistics.com/salesbaseball.php3