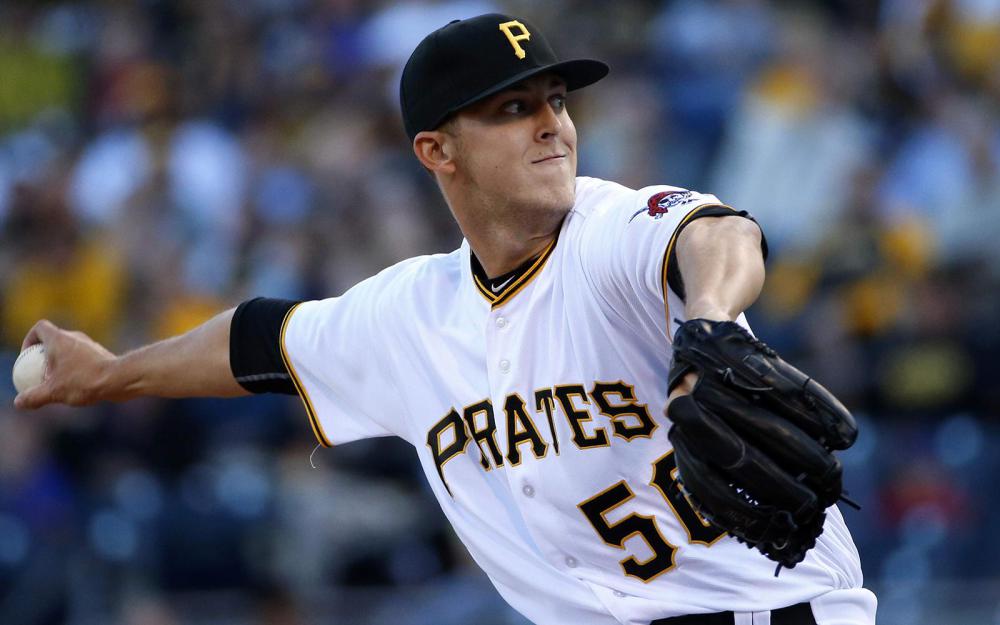 Colin Moran (3B) PIT - One of the players we highlighted on Sirius Sunday morning was Moran, who appears to have been a part of the "flyball revolution" in the relative obscurity of AAA Indianapolis last year. I must confess, Moran was almost completely off my radar prior to last season. A 1st round "cost-conscious" selection of the Marlins back in 2013, Moran was billed as a player with an average hit tool and above-average defensive chops at third, with little fantasy projection other than as a second-division starter. His first three minor league seasons fit that scouting report to a T, as he hit .300 with 20 HRs total at three different stops (including a trade to Houston). His 2016 AAA season with Houston was pretty ugly: .259 with 10 HRs in 3/4 of a year, and he looked ready to become a AAAA player or bench CI for the next five years or so. Last season, however, Moran cut his GB rate by 13 percent: more than Logan Morrison or Yonder Alonso. Instead of 10 HR with a .368 SLG in 511 AB, Moran hit 18 HR with a .543 SLG in just 338 AB in 2017...in the same park. As part of the Gerrit Cole deal, he came to Pittsburgh fighting for time with veteran David Freese, and he's won at least the lion's share of a platoon at 3B with an excellent performance thus far. Another two singles Sunday have him at 345/387/517 after 31 PA, and at just 25, there's no reason to think this is that much of a fluky start with what we know about the swing-changing. I think he's a viable standard-league CI, and that isn't damning with faint praise.

Jake Arrieta (SP) PHI - I'm not sure there's a way to sugarcoat this: those who drafted Arrieta at or above his ADP (SP23, round 8 in 12-team leagues) are extremely likely to be disappointed with the value they receive. There is no way to paint the massive across-the-board decline in his stats the past two years in any other way but to conclude that this is a player that has seen his best come and go. Arrieta was a late bloomer, having his first successful season at age 28, so he's already 32 with velocity decline of 2 1/2 mph over the past two seasons. His season opener on Sunday, where he threw 74 pitches average yet another mph decline with his fastball, wasn't awful but it wasn't very inspiring either. 5 swinging strikes in 74 pitches and 5 baserunners and 3 runs (2 earned) in 4 innings to one of the league's worst offenses is mediocre, although he did look much better after the first inning (3 IP, 0 H, 1 BB, 5 K). I cannot get past the decline in GB rate (56, 53, 45) while heading to a park that allows 20 percent more HRs than the park he left, the velo decline and concurrent drop in swinging strike rate (11, 10.5, 8.7), and the increase in hard contact rate (22, 25, 29.4) over the past three seasons. I'd place the over/under on his ERA around 3.90, and I feel like I'm being generous. Tread carefully here.

Brian Anderson (3B) MIA - After another double and walk Sunday, Brian Anderson has hit in 8 of 9 to start the year with more walks than strikeouts. Plate discipline is probably his top skill, but he did have 22 homers last year in only 3/4 of a year in the minors, so the possibility of a 20 HR player with an average that doesn't hurt is there, and he's only 24. He's likely underrated, although 3B is so deep he'll still be lucky to crack the top 20 at the position even if approaches his performance ceiling. 3B20-3B 25, though, is potentially doable. Ergo, in deeper leagues, go nuts.....I think he's solid.

Sean Newcomb (SP) ATL - I'm sure he was in the lineup for virtually no one, but Newcomb spun a gem in Colorado Sunday, scattering five singles over six innings of work and fanning nine without walking a man. K's and GBs, the Holy Grail of pitching, and this is what Newcomb can provide when he's on. His upside is significant enough that he really ought to be rostered in all formats, but the floor is pretty low as well, so an iron gut will be required.

Jameson Taillon (SP) PIT - Taillon was masterful Sunday, holding the Reds to a single and two walks in a complete-game shutout while striking out 7. He threw roughly 73 percent 2-seam fastballs on the day, routinely enticing weak contact with an 11:9 GB:FB ratio. I thought the step forward would come last year, but the cancer diagnosis, surgery, and extremely quick recovery made the fact that he came back and pitched adequately a gigantic feat in itself. A year later, I think you'll see numbers more like his 2016 debut, but potentially tacking on an extra K/9. In other words, for me, he's a legitimate top-25 SP.