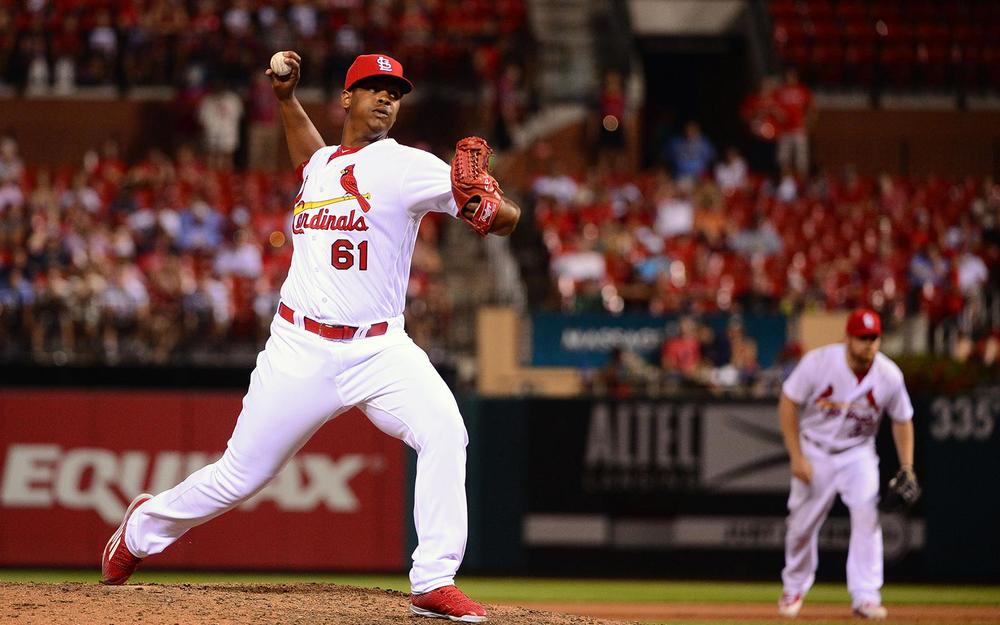 Alex Reyes (STL) - Alex Reyes moved his rehab to Single-A Peoria on Monday night and yours truly was present. Reyes was absolutely dominant, tying up the majority of Clinton's batters throughout his outing. While the radar gun was down at the ballpark, a local journalist who follows the Chiefs said via Twitter that the right-hander touched 100 MPH on a strikeout in the first inning. He finished with 5IP, 0ER, 1H, 2BB and 12K. Belong are a few of the more impressive strikeouts of his night:

4th strikeout to end the second inning. Look at that break! pic.twitter.com/35up0EDL1e

He bounces back from his walk with his 9th K through 4 IP @peoriachiefs pic.twitter.com/2EmImrDhZi

Aaaaand there's 12 strikeouts for Alex Reyes. This one resulted in a standing ovation from the crowd. @peoriachiefs pic.twitter.com/ELv27Q6fQR

Madison Bumgarner (SF) - Madison Bumgarner threw off the mound for the first time since landing on the disabled list with a fractured pinky. Bumgarner told reporters after the game that "everything feels completely normal now". The next step will be the start of a rehab assignment, which should last at least a few starts. It looks like fanatsy owners are only a few weeks away from the reuturn on their ace. While it's been back-to-back seasons with injuries for MadBum, both have been fluke occurences and there's really no reason to be concerned about Bumgarner this season. There might be a little rust due to him being thrown off his ramp-up schedule, but it's liekly be performs like a top-10 starter for the remainder of the season once he returns.

DJ Lemahieu (COL) - Colorado second baseman landed on the disabled list with a thumb injury, which the team currently says will not require surgery. In his absence, it's possible that the Rockies will call back up Ryan McMahon, who has played at second base since being sent down to Triple-A, but for now the team called up Pat Valaika. It's the second time LeMahieu has hit the disabled list this season, and it's worth noting that after returning from the disabled list the first time, he failed to get an extra base hit in any game before landing back on the shelf. Thumb injuries are tricky with power, LeMahieu has actually been a little unfortunate in the batting average department this season with just a .301 BABIP and .279 batting average compared with career marks of .350 and .301, respectively.

Freddy Peralta (MIL) - Freddy Peralta will not be sent down, at least not yet. The Brewers announced that the rookie would start again on Saturday against the Twins. Peralta struck out thirteen in his major league debut, but has seen mixed reviews among fanatsy analysts around the industry. Peralta shot through the minior leagues in 2017, starting in single-A and eventually advancing to triple-A after posting a strikeout rate >30% at each of the levels. His walks are a little high, but his high groundball rate paired with a high strikeout rate is something to be excited about. He's going to be given the opportunity to flash what he's got and fantasy owners should take advantage because the ceiling is high on Peralta than just about any other starting pitcher that has made their debut this season, besides Walker Buehler.

Ozzie Albies (ATL) - Ozzie Albies went 3-for-5 with his 13th homerun and 14th double. Albies' ISO is now sitting at an unbelievable .311, but his slash line is still just at .377/.312/.588. While there's plenty to be excited about for Ozzie Albies, let's take a deeper look into anything that could spell trouble down the road. His 18% strikeout rate is great, but his low 4% walk rate actually a drag in OBP leagues. Mildly concerning is also his 33% hard hit rate, which is technically above league average, but it's also not enough to typicslly support s 20% HR/FB rate. He's compensating for the mediocre hard hit percentage by pulling the ball more, but a guy who hits a lot of flyballs, that a dangerous combination for a player's batting average.