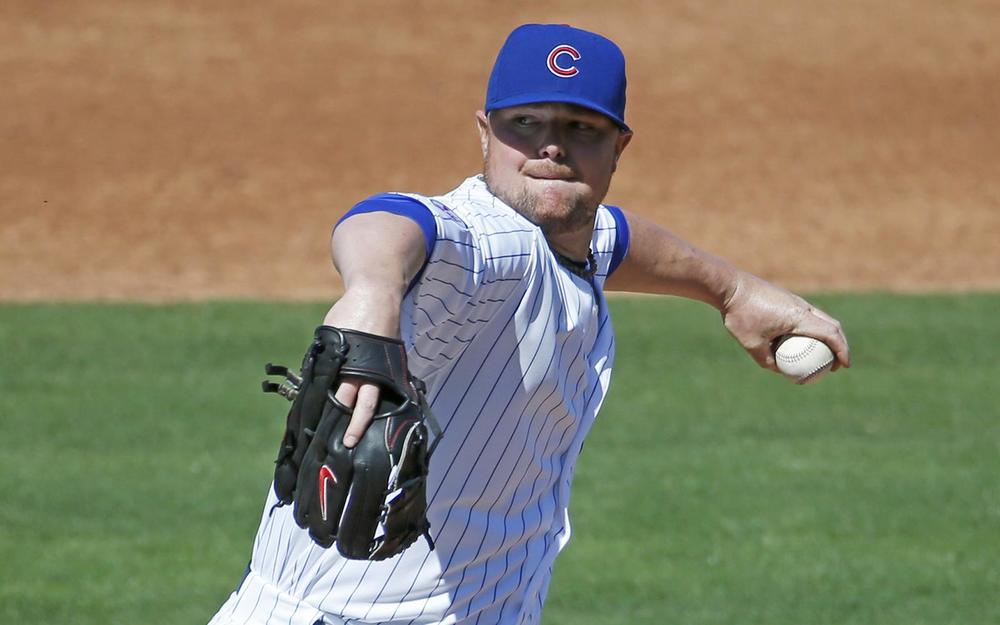 Jon Lester: Lester lasted just 3.2 innings against the Nationals on Saturday and allowed 9 runs (eight earned) to go along with 5 strikeouts. Lester took a solid 3.44 ERA into Saturday's game but struggled in July to the tune of a 6.46 ERA for the month and will likely continue to struggle over the rest of the season. July was largely the result of expected regression for Lester, and his BABIP still sits at just .269 despite inducing a poor 15.6% soft contact rate and allowing a high 28% line drive rate while generally failing to generate pop ups (8% IF/FB ratio). To make matters worse, Lester has allowed his most fly ball heavy batted ball profile since 2007 this season (0.63 GB/FB ratio), so he's essentially allowed a significant amount undesirable contact while maintaining a low BABIP -- a recipe for continued regression. Look into Lester's plate discipline skills and you won't find much optimism either; the 34-year-old has posted below average o-swing (26.4%) and contact (81.2%) this season, and his declining fastball velocity likely hasn't helped his case. Fantasy owners should try and capitalize off of Lester's name value and strong first half as his rest of season outlook is far from encouraging.

Brian Dozier: Dozier walked and struck out once against the Rockies on Saturday. Dozier has been struggling this season and had posted a disappointing .229/.314/.424 slash line so far in 2018, but offers plenty of upside over the rest of the season. Despite posting arguably his most desireable batted ball profile for his career (career best 36.2% hard hit rate, solid 0.68 GB/FB ratio, IF/FB and line drive rates in line with his career averages), Dozier owns a .255 BABIP that is likely to rise significantly over the rest of the season (.300 in 2017, .274 career average). In addition, Dozier boasts impressive plate discipline (22.2% o-swing rate) and a decent 78.5% contact rate that support his strong strikeout (20.7%) and walk (10.5%) rates. Moving from the Twins to the Dodgers should also bolster Dozier's fantasy value as his RBIs and runs should increase, so look for him to build a significant amount of value over the rest of the year and owners should consider buying low.

Trevor Williams: Williams limited the Giants to no runs and six baserunners over seven innings on Saturday but struck out just two batters. Williams had posted a solid 3.88 ERA entering Saturday's start, but he's been worse from a fantasy and rest of season outlook perspective than his ERA suggests. For one, Williams offers little upside in strikeouts as he owns below average o-swing (29.2%), contact (84%), and whiff rates that translate to a subpar 16.4% strikeout rate. Additionally, Williams' very average contact quality and batted ball profiles (30.6% hard hit rate, 21.3% soft contact rate, 10% IF/FB ratio, 0.70 GB/FB ratio) indicate that his 2.7% home run rate and .271 BABIP should rise towards the league average rates (3.1% and .299, respectively) over the rest of the season. Williams will likely pitch alright throughout the rest of the season, but his current stats represent more of his ceiling than anything else, and fantasy owners should consider selling high if they can.

Steven Souza: Souza went 0-4 with a pair of strikeouts against the Reds on Saturday. Though Souza's overall .254/.327/.413 slash line isn't overly exciting, fantasy owners should jump on the opportunity to acquire him at a relatively low cost. Since returning from a DL stint on July 5th, Souza has slashed .304/.373/.533 and should be able to maintain a strong level of production over the rest of the season. Souza boasts an elite 42.9% hard hit rate and fly ball heavy batted ball profile (0.66 GB/FB ratio) but has posted a 2% home run rate (5.9% HR/FB ratio) that is likely to rise substantially over the rest of the season. In addition to a likely increase in home runs, Souza should see his strikeout (26.1%) and walk (8.5%) rates improve over the rest of the season based on his selective 23.8% o-swing rate (43.5% swing rate) and career best 76.3% contact rate. Expect Souza to have a very productive finish to the season and buy low if you can.

Aaron Nola: Nola pitched six shutout innings against the Padres on Saturday, allowing seven baserunners and striking out five to lock down the win. Nola has been in the midst of a career best season and had posted a 2.37 ERA entering Saturday's start. Not only his Nola's average fastball velocity up nearly one full tick from last season, but he's also been relying on it more often and developed it into an extremely effective pitch (.260 SLG against). In addition to his improved fastball, Nola has limited hard contact to an impressive 24.9% and while he's always been solid at generating desirable contact (28% career average hard hit rate, 1.06 career average GB/FB ratio), he's been even better this year with his strong hard hit rate and 1.04 GB/FB ratio (the second most ground ball heavy mark of his career). Furthermore, Nola has posted a career best 33.1% o-swing rate and strong 75.6% contact rate that matches his mark from last season. That combination -- combined with his 47.1% swing rate and 44% zone rate -- make Nola's impressive 17.9% SO-BB% reasonable, and he should be able to maintain a high rate in that category over the rest of the season. Expect Nola to continue pitching like an ace this season and beyond, and fantasy owners should have no trouble deploying him as such.