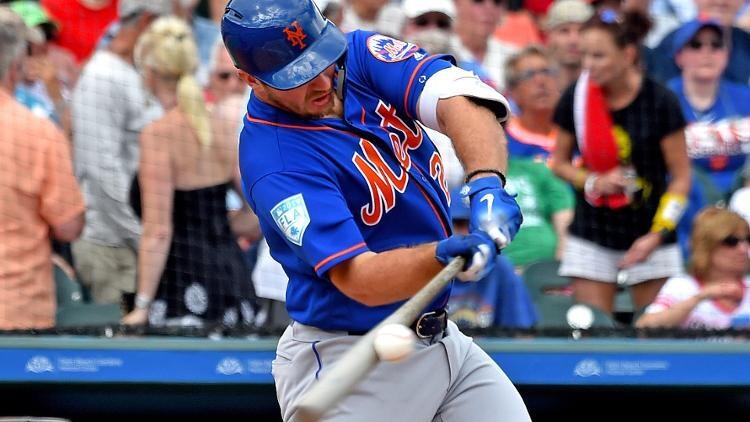 Alonso went 1-5 with his first career home run Monday. Alonso launched a 444-foot shot in the 9th to give the Mets some insurance runs. Alonso forced his way to not only an opening day roster spot but the starting first base gig and a 2 spot in the batting order thanks to a huge spring where he hit .368/.394/.647 with 10 extra base hits including 4 home runs. He put up monster power number across AA and AAA last year, slugging 36 home runs and drawing 76 walks and if the early returns are anything he looks prime for a big Rookie season. For all his power he never was a huge strikeout guy in the minors, posting a great 15% BB rate and 18% K rate in AA - those numbers shifted a bit as he moved up to AAA (11% BB, 25% K) - but not too underwhelming for someone with his power profile. Early on he has slashed .412/.474/.765 with 2 walks and 6 Ks.

Newcomb pitched 4 shutout innings allowing 6 hits while walking 4 and striking out 3 in his season debut. He only lasted 91 pitches and threw just 9 first-pitch strikes to the 21 batters he faced. Newcomb continued a Braves pitchers' trend of walking batters - something that carried over from last year as well. Newcomb's walk issues should hardly come as a surprise considering he has a 4.7 BB/9 over 264 career innings and struggled big time in spring training walking more hitters (15) than he struck out (14). The former 1st round pick in 2014 rose quickly through the Braves system thanks to high strikeout rates but his best bet at the professional level may be to work on perfecting his curveball. In 2018 he held batters to a miniscule .139 avg and only surrendered 3 walks over 75 plate appearances. He only threw the pitch 14% of the time last year and considering his fastball can touch 97 mph, with the curve dipping to 71 a better mixing and matching could lead to even nicer results.

Dahl continued his hot start in 2019, going 2 for 4 Monday. He continues to hit the ball with authority following a hot spring that saw him hit .322. Injuries have completely derailed his career up until this point as he missed the entirety of the 2017 season- but was able to sandwich in 2 .859 OPS seasons in 2016 and 2018 covering 508 plate appearances over that time. Playing full time and hitting near the top of the Rockies order could afford Dahl a chance at a breakout season - an OPS close to .900 with 20+ home runs is doable. Dahl will need to keep his strikeouts in check - he did post a Swing Strike Rate of 15.4% last year and has already struck out 7 times in 21 plate appearances. The Strikeout numbers aside I feel safe deploying Dahl daily in all formats.

Moran stuffed the stat sheet in the Pirates loss going 2-3 with a 2B, Home Run, 3 RBI and 2 walks. He lost the starting 3B job to Jung Ho Kang thanks in part to a poor spring (.234/.315/.319 and poor defense) and Kang's MLB leading 7 HR but has reached base 6 times in 7 plate appearances over the league's first weekend. He delivered a roughly league average output in 2018 as the Pirates primary 3B hitting. 277 with 11 HR and doesn't really offer enough in any one department (power/speed/avg) to be a starter in everyday fantasy leagues at a corner IF spot. His inability to handle lefties (.177 in 2018) won't even afford him platoon spots over Kang who doesn't handle them much better (.225 in his career) so Moran will for the time being be a 1-2 start per week type of player unless Kang struggles.

Archer pitched threw 5 shutout innings Monday, allowing just 2 hits while striking out 8. He was a bit wild (60/99 pitches for strikes, 3 walk and 1 HBP) in this and despite generating 17 swinging strikes his pitch count was further elevated from allowing Cardinals hitters to stay alive by surrendering 18 foul balls. He was able to strand all baserunners that reached and left the game with the lead in-tact only for the Pirates bullpen to blow the lead and eventually the game in extra innings. Archer has struggled the second and 3rd times through the order the past few seasons (4.95 ERA second time through, 4.65 third time through) and both Cardinals hits came during his second trip through the order. All things considered he does still boast high-ceiling strikeout potential (9.7 K/9 in his career) and makes a nice addition as the 3rd/4th starter in the Pirates rotation. He will face the Reds on Sunday to round out a 2-start fantasy week.